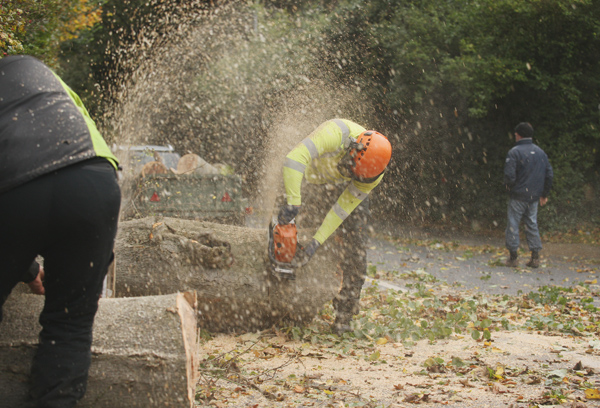 Workers clear Dunmurry Lane after a tree fall on Monday

Schools across Ireland have closed for a second day in a row as the clean-up operation following ex-Hurricane Ophelia swung into action.
As the record-breaking storm hit Ireland, offices and businesses closed and staff were sent home early yesterday to avoid the worst of the weather which moved through Belfast between 3pm and 10pm last night.
NIE crews raced from incident to incident removing trees that had fallen and had taken down power lines.
A spokesperson for the electricity provider said that as of 9 am this morning approximately 3,800 homes were without power with the worst affected areas in County Down. Within Belfast, Dunmurry bore the burnt of the power cuts.
Julia Carson, NIE Networks Communications Manager, said although the damage to the network has been significant, the repair process is progressing well.
“The damage caused by Storm Ophelia has been extensive with lines brought down by falling trees and poles broken by the high winds. Some areas experienced gusts of up to 70mph.
“We have been working in difficult conditions since yesterday afternoon to restore power to over 48,000 customers and we’ll continue to respond to reports of damage and reconnect supplies as quickly and safely as possible.
“Our main incident centre in Craigavon and Local Incident Centres across Northern Ireland are open and will co-ordinate the local repair process until all customers are back on supply.
“We may have to take customers off supply during the day to facilitate repairs but we will endeavour to restore the majority of customers today. “
Political parties were on the ground in most areas with Sinn Féin activists clearing roads across the city where trees had come down and blocked roads.
SDLP reps attended a temporary homeless shelter set up on Donegall Street to ensure no one had to sleep rough during the worst of the weather.
Anyone still without power who has not yet reported the disruption to NIE Networks can do so via www.nienetworks.co.uk or the Customer Helpline on 03457 643 643.
Never approach downed power lines or broken electricity poles.