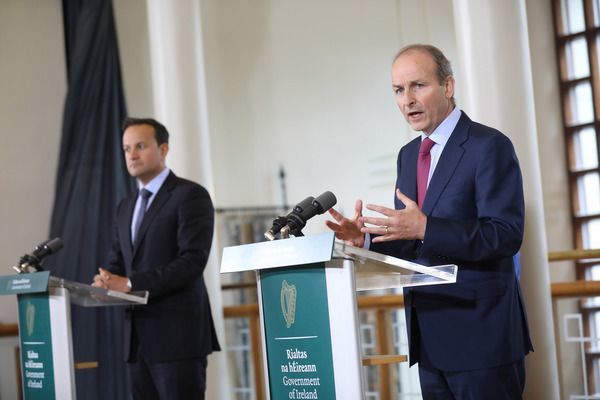 I SEE our new Taoiseach thinks that the Good Friday Agreement settled the constitutional question. It’s an interesting interpretation of a compromise for peace after 800 years of conflict.

Mícheál Martin’s thought process has led him to the conclusion that because of that we can all look at our relationships instead. Partitionist convenience.
It is worth remembering the text in the Good Friday Agreement: “It is for the people of the island of Ireland alone, by agreement between the two parts respectively and without external impediment, to exercise their right of self-determination on the basis of consent… to bring about a united Ireland… accepting that this right must be achieved… with… the agreement and consent of a majority of the people of Northern Ireland.”
All of that in the context of recognising the “legitimate wish of a majority of the people of the island of Ireland for a united Ireland”.
The question of Irish unity took a back seat following the Good Friday Agreement. There was little focus on the constitutional question from 1998 until the Brexit vote of 2016. More focus was concentrated on Strand One of the GFA, on whether the structures of Stormont would work and the aspiration for a united Ireland was really only spoken of at republican commemorations.

But that came to a shuddering halt and the constitutional question came into sharp focus as a result of the English decision to leave the EU. No-one can deny a conversation about constitutional change has only gained momentum since then. There has been no further division in those four years.
Those in nationalism who have been exposed as not terribly nationalist after all by this growing conversation wish to find ways to delegitimise it.

Using words like “dangerous”, “provocative” and “divisive” is always the first rearguard action of those who do not want something. It forces those who want a positive conversation to justify even having the conversation. And that can take so much time and energy that those who don’t want the conversation hope it goes away. Not this time, chum.
However, despite the best efforts of some, the legitimacy of this conversation has been established over the past four  years. It is happening and the sky has not fallen in. Taoisigh, party leaders, TDs, MPs, MLAs, commentators or whoever will just have to live with that and engage it responsibly.

“Micheál Martin said the Good Friday Agreement was his ‘touchstone.’”

Except the bit about a referendum on Irish unity obviously. https://t.co/VB91sCuoZv

Plámás in the form of “Let’s build relationships” is about one thing – implied fear. Appealing to partitionist stereotypes it says, “Oh, those nasty northie types will start fighting again. Us nice guys will ‘build relationships’, ‘trust’ and ‘reconciliation’.” Building relationships, trust and confidence is something that should be a given.

While Dublin abandoned the north after the St Andrews Agreement and withdrew the funding streams for community development and relationships, a whole generation grew up with those buzzwords while in parallel have seen their rights to national identity and constitutional status diminished and further denied. Without defence from Dublin. This generation is not interested in buzzwords it wants change.
Partitionist parties of the south wish to maintain partition, their power has been based on it. It has been 22 years since the GFA.
The constitutional landscape has changed politically and demographically. It’s time for Dublin to catch up. 1998 plámás doesn’t cut it in 2020.