OPINION - GERRY ADAMS: One good turn 173 years ago deserves another 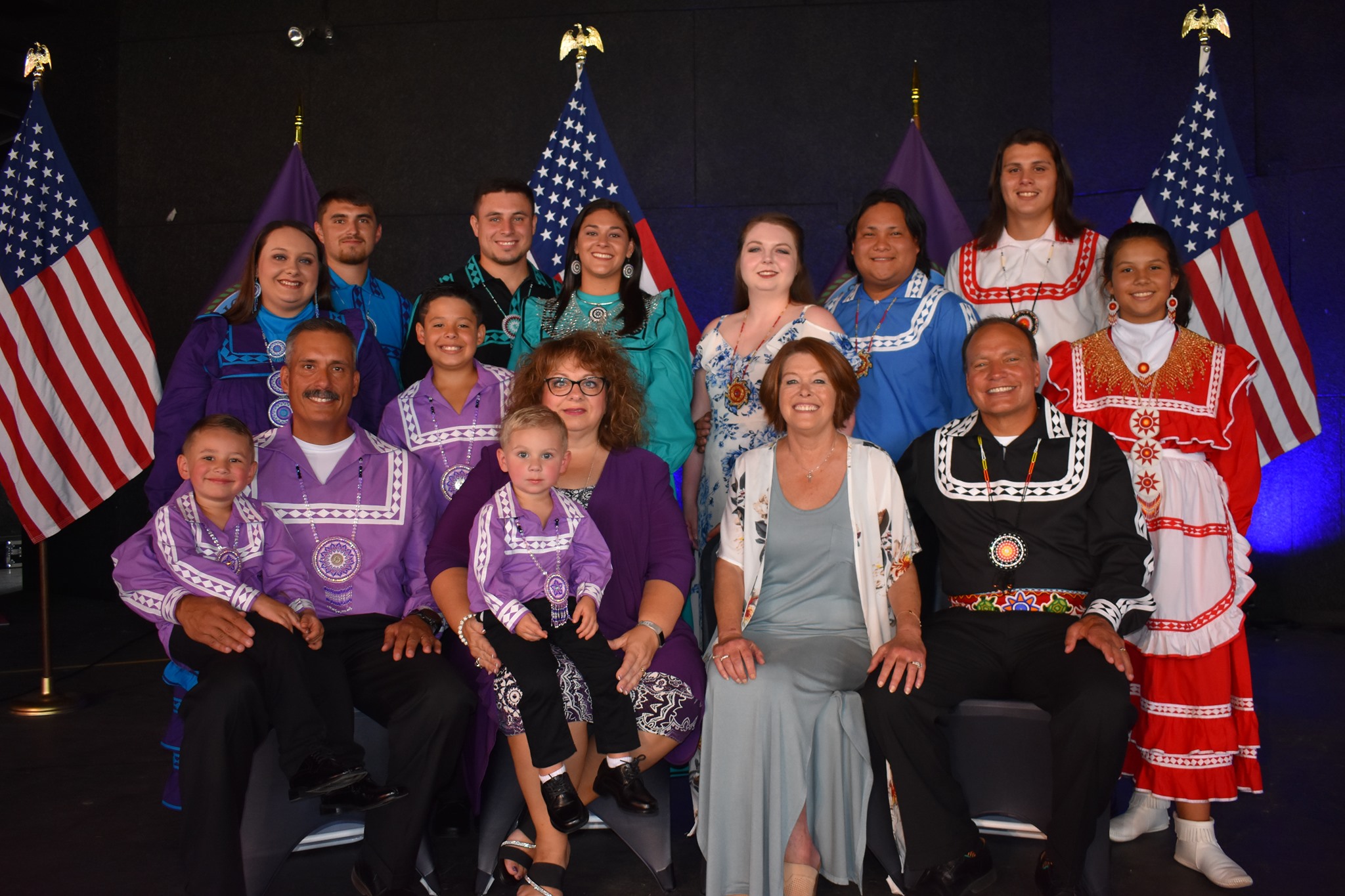 AR SCÁTH A CHÉILE: Chief Gary Batton (on right, black shirt) of the Choctaw Nation has paid tribute to the Irish for returning a favour dating back two centuries.
THE Irish proverb “Is ar scáth a chéile a mhaireann na daoine.” translates as  “We all live in each other’s shadow.” In other words we are all interlinked.

In our own lifetime probably no greater example of this connectivity between people and communities – of us living in each other’s shadow – is to be found in the communal response to the Coronavirus pandemic. Frontline health workers, carers, shop workers, lorry drivers and so many others have minded us despite the risk to themselves. Community activists have again and again collected and delivered much needed food parcels and prepared hot food for those in need. While this is a universal response and not uniquely Irish it is also in keeping with one of our traditions. That is the meitheal, when neighbours come together to help with the harvest or turf but also following misfortune.

There are many examples of this in recent times and thankfully lots of evidence that the spirit of the meitheal – a sense of community, solidarity and volunteerism is alive and well among our people.

This empathy and compassion helps connect us. We are able to look beyond our own individual concerns, desires and fears and reach out to assist others in our family, our street, our community or our world.

One recent example of this was last Friday night’s The Late Late Show on RTE. At a time when so many are experiencing huge stress in their lives viewers of The Late Late Show raised over two million euro for Pieta House, the largely voluntary organisation which provides free therapy to those engaging in self-harm, with suicidal ideation, or bereaved by suicide. It was an amazing example of generosity.


Last September the GoFundMe organisation revealed that the Irish people are the most generous in the world. GoFundMe said that nearly one in ten Irish men and women have donated over 40 million euro to GoFundMe causes in the last ten years. There have been 860,000 individual donations. Organisations like St  Vincent de Paul, as well as Trócaire and Concern are among many that also raise millions each year to help those here and overseas who need support – health care, food, water, shelter.

Why are the Irish so generous? While we are no better than anyone else, essentially we are decent people. Loving. Compassionate. Caring. But we are also a people who have historically experienced conquest and occupation, colonisation and migration. It’s in our DNA.  Even if we are not fully aware of our own history it does give us an empathy with the difficulties faced by others. This includes developing nations still suffering from the impact of colonisation, migration, exploitation and conflict.

The most devastating upheaval in Irish history was An Gorta Mór – The Great Hunger. The census of 1841 estimated that the population of our island was just above eight million.  Over six million were tied in a desperate battle with the land to produce enough for their families to live on. Most had less than a half-acre plot of land. They were totally dependent on the potato. The British government understood the dangers of the overreliance on the potato. During the first four decades of the 19th century there were at least 150 committees and commissions of enquiry which reported on the danger of famine.  They were ignored.

The failure of the potato crop in 1845 led to even greater hardship.  One effect of this was to force people to flee overseas. They abandoned their mostly one roomed, mud- or turf-walled cabins, with their sod roofs, and their small parcels of land. They left on ships (many of which had carried African slaves a few decades earlier) bound for North America. Coffin ships.

In the five years of The Great Hunger it is estimated that one million died and another million fled. By the end of the 19th century there were more Irish people living abroad than on the island of Ireland. The Great Hunger – An Gorta Mór – left an indelible mark on the Irish psyche. In my opinion it has shaped and made us more empathetic to the experience of other peoples

One account from An Gorta Mór which has been told and retold many times over the years is the help given to the starving Irish by the Choctaw native American people in Oklahoma.

The Choctaw nation was originally from the Mississippi region in the USA. In 1830 15,000 people were forced to walk 600 miles to Oklahoma. In what subsequently came to be known as the ‘Trail of Tears’ a quarter of them died. Even when they reached their new place they were destitute and faced violence and intimidation. One Choctaw man described how their homes were “torn down and burned, our fences destroyed, cattle turned into our fields, and we ourselves have been scourged, manacled, fettered, and otherwise personally abused, until by such treatment some of our best men have died.”


Despite the many dangers and challenges they faced in their own lives the Choctaw people were moved by the accounts in local papers of the great hunger in Ireland. One historian, Anelise Hanson Shrout, writing in the Journal of the Early Republic, described the plight of the Choctaw people: “Most would have experienced enormous financial, emotional, and demographic damage as a result of removal. It is difficult to imagine a people less well-positioned to act philanthropically.”   But act they did. At a meeting they managed to raise $170 – about $5,000 today. That act of kindness and generosity has never been forgotten.

The donations are inspired by the donation that the Choctaw Nation sent to Ireland in 1847 at the height of The Great Famine. https://t.co/EDx8TEGr9V #Najavo #IrishAmerica

Consequently, several weeks ago when a GoFundMe page was opened to raise money for the Navajo and Hopi peoples trying to combat Covid-19 many Irish people donated to that effort and cited the help given by the Choctaw almost two hundred years ago as a reason for this.  It is an act of solidarity by people in Ireland to native peoples in Arizona, New Mexico and Utah who are reeling under the impact of Covid-19. Gary Batton, Chief of the Choctaw Nation of Oklahoma, said last week that the tribe was “gratified – and perhaps not at all surprised – to learn of the assistance our special friends, the Irish, are giving to the Navajo and Hopi Nations.”

So, one act of generosity, of solidarity 173 years ago is being reciprocated today by another act of solidarity. Is ar scáth a chéile a mhaireann na daoine.