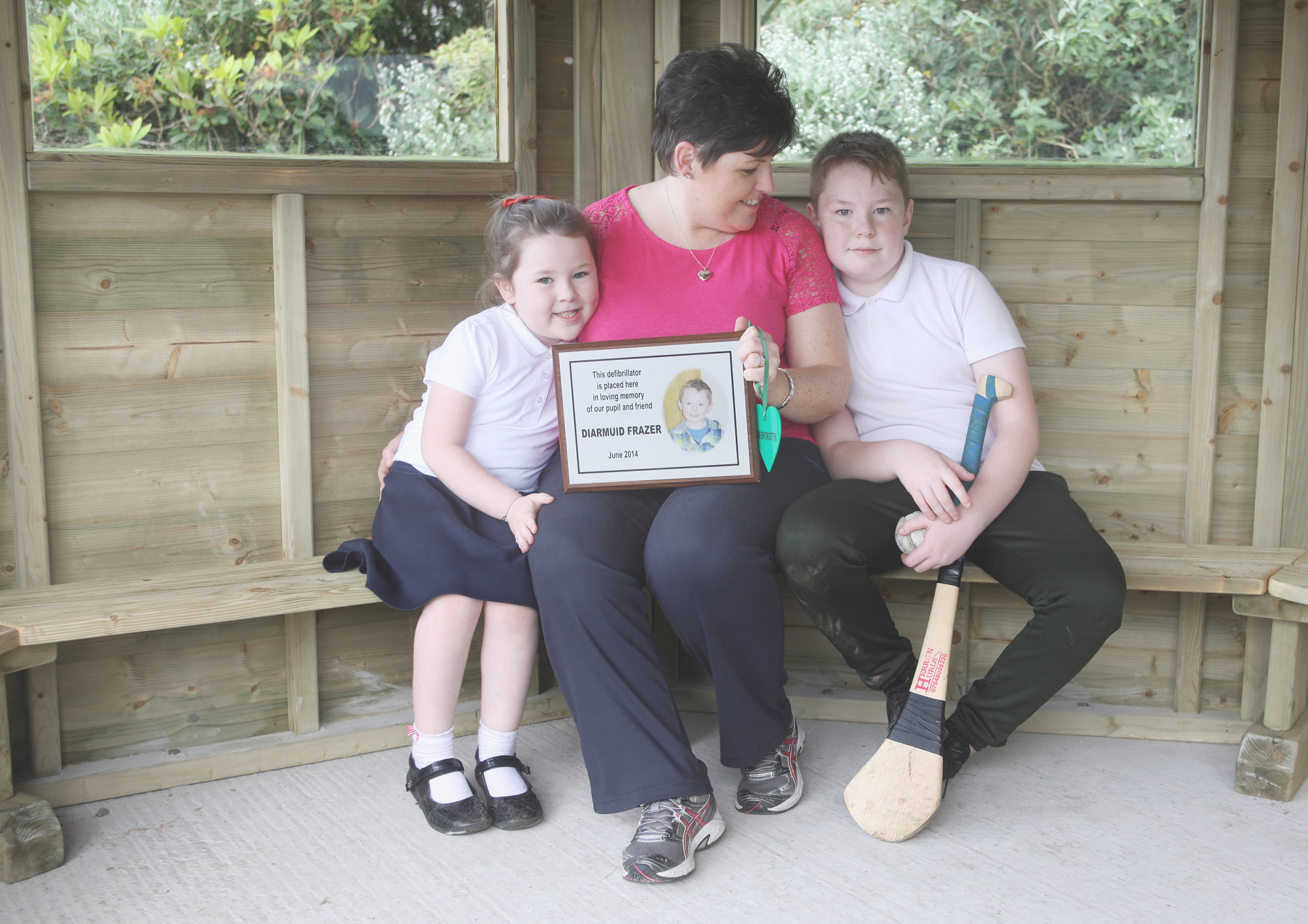 BALLYMACWARD Primary School was bathed in summer sunshine on Friday for a special unveiling of the new outdoor classroom.

The Rock Road unveiling was made especially poignant as it was dedicated to the memory of little Diarmuid Frazer. All four of Tina Frazer’s children have attended Ballymacward. The Andersonstown News had previously reported how her twin boys, Diarmuid and Cormac, were involved in a car accident in Railway Street in Lisburn in March 2014. Six-year-old Diarmuid, a Primary Two pupil at Ballymacward at the time, tragically lost his fight for life two days later in news that stunned the community and devastated his teachers and school friends.

Since Diarmuid’s passing, the Frazer family have continued to hold annual fundraisers in his memory along with an annual tournament at Lámh Dhearg where the twins, along with their older brother John James, are members.

“From Diarmuid’s death we decided as a family, as a community that we would always like to do something to benefit children,” explained Tina. “For Diarmuid’s first anniversary we knew we wanted to do something that would benefit the Children’s Hospital in the Royal because they were so good to Diarmuid. We started fundraising, not really knowing what we were going to be able to achieve and to be honest, we were totally overwhelmed by the generosity of people in all communities. We held the ‘Never Forgotten’ gala ball in the Titanic and raised an astonishing £44,500 – it was just mind-blowing. The funds raised enabled us to be able to buy the ICU a bespoke ultrasound scanner for the pediatric unit. For Diarmuid to be able to have that for other families is just something that I can’t put into words,” added Tina.

Tina spoke of how this was Cormac’s final year at Ballymacward before starting ‘big school’ at All Saints. The outdoor classroom is there to be enjoyed by all the children from the primary and nursery unit as well her daughter Orlaith who will be starting Primary Three. “We as a family can’t thank Ballymacward enough for their support, the teaching staff, classroom assistants and the PTA, we couldn’t have done the fundraising without the support from the PTA, Friends of Ballymacward.”
Over £8,000 was raised to fund the outdoor classroom through a series of pub quizzes in the Ballymac Hotel, skydives and colouring in competitions.

Speaking on behalf of Friends of Ballymacward, Bronagh Shepherd said thank you to all who have helped.

“Thanks to the Centra at Whitemountain, the EuroSpar at Thaxton Village, Stoneyford Concrete, who supplied the base free of charge, Kieran McCann, who provided the groundworks free of charge too,” she said “We raised £8,358 which was fantastic and to just say thank you for everyone who helped us get that far.”

Ballymacward Principal Hugh Kennedy added: “Myself and Tina chatted at the start of the school year and came to the conclusion that an outdoor classroom would be a great idea, it would be brilliant and really benefit the children. It will be here forever and used all year round, it's something that everyone can use and we are very thankful for all the efforts that went in to getting it in our grounds."