GERRY ADAMS: Planting a seed for the future (and the past) 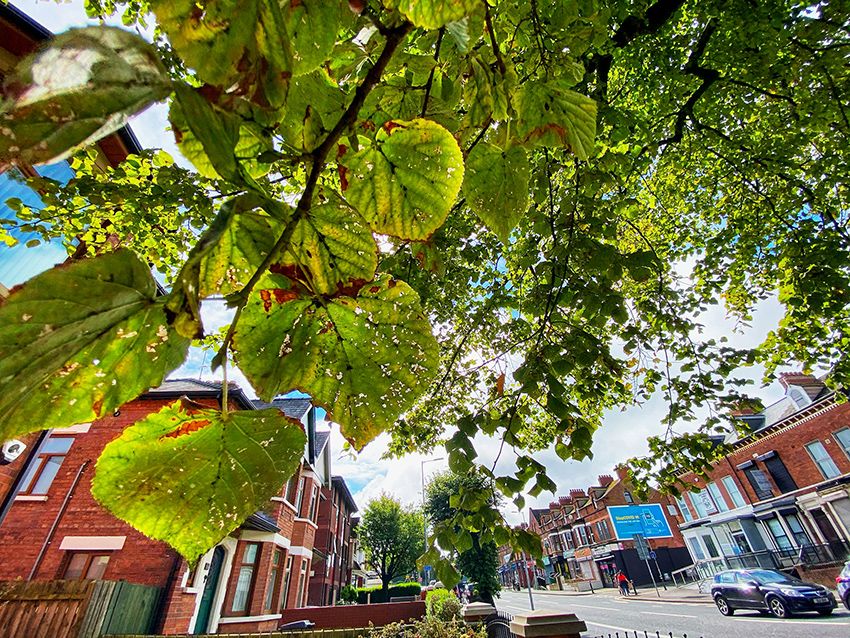 BRANCHING OUT: An elm tree on the Falls Road – a daily walk will take you past many seed sources

FOR years I used to gather up acorns and chestnuts and hazelnuts and little sycamore seeds and all manner of other seeds. My growing methods are fairly basic. I collected as many as I could and then planted them out in pots or growbags and let nature do the rest. I worked on the general assumption that if I planted a lot there was a greater chance that I would harvest a lot.

I’m not talking of hundreds of seeds, by the way. Pocketfuls picked up on walks. The Falls Park has plenty of oak and chestnut trees. There are native trees also in the Waterworks, Colin Glen and Woodvale. Acres of broadleafs. And in all of our forests. The British Prime Minister’s country residence at Chequers has great rowan trees. I got heaps of towan berries there.  They are always a wee bit trickier – like the tenant in Chequers. The seeds are contained in the little red berries but well worth the trouble. Unlike the tenant in Chequers.

Rowans are favourite smaller trees. And blackthorn. Chestnuts are straightforward. In fact chestnuts are probably the easiest to grow. Once they take, these trees will be very content in pots for as long as ten or even twenty years. They are unique presents and great living memorials for friends who have died. I have a wonderful tall oak, grown from a tiny acorn, in memory of the late Eileen Howell. Another for Siobhan O’Hanlon. Others for Colette’s sisters Marie and Leah. A special chestnut for Joe Floorboards and a gingerish leaved acer for Cleaky. And it’s not just for deaths. Babies too deserve their own trees.

This last few years I haven’t been as diligent as I used to be with my seed gathering. It’s too easy to be too busy. I didn’t give it up completely but I’m glad to say I am now refocused again.

Why am I telling you this? Because now is the season for seed gathering. Most of the tree seeds won’t be ready for a few months but now is the time to spot the parent tree or trees. Then it is a simple matter of gathering up your seeds when they fall to earth.  Even a few chestnuts planted in wee pots and left to their own devices will make a difference. And give you great pleasure.

But while you’re waiting on the trees to reward you there are lots of wild flowers coming into seed at this time. Basically anything with a seed pod. Or a flower head. Foxgloves, or lus mór, are an old favourite of mine. Just cut off the seed pods and let them air-dry then store the seeds in envelopes until you are ready for planting.  Some people grow them on little trays before planting out, but I’m a lazy gardener. I just sprinkle the seeds where I want them to grow and let nature do the rest.

It’s always a good tip to wash your hands after handling seeds. Some can be picked directly from the flower heads. Flowers will drop seeds themselves when they are ready so it’s easy to know the best time to gather your share. Incidentally, there are social media sites to guide you. Just Google seed gathering. And don’t confine yourself to wild flowers. Many garden blooms can also be procreated. From seed. Or cuttings.  Apart from flowers themselves and your own enjoyment, the bees and butterflies will be most grateful.

Campfire tales of a great man


LAST week I was part of an online panel discussion on the life and times of escaped slave Frederick Douglass, his time in Ireland in the 1840s and the relevance of his message of hope and equality in today’s world. The conversation was part of an ambitious and successful one day conference organised by the Irish Echo in New York.

The event – The Big Irish Campfire (the title alone attracted me) – showcases Irish American organisations across the USA. All of the discussions were short – 30 minutes – so there was no time to bore those contributing or watching. The Echo staff – comhgairdheas to all involved – ran a tight ship.

My discussion, which was hosted by State Senator Tim Kennedy, included the acknowledged expert on Douglass, Professor Christine Kinealy, who is Director of the Institute of Ireland’s Great Hunger at Quinnipiac University in Connecticut. Under the clever title ‘A Camino for our Times: On the Trail of Frederick Douglass in Dublin, Belfast and New York’ Christine talked about the three different trails/walks she has developed in Belfast, Cork and Dublin where it’s possible to visit sites that are linked to Douglass’s time in Ireland.

The Belfast trail commences at the grave of Mary Anne McCracken and includes the First Presbyterian Church in Rosemary Street, outside of which Belfast City Council has agreed to erect a statue of Douglass.

Douglass visited Ireland and Britain following the publication in 1845 of his autobiography, ‘The Narrative of the Life of Frederick Douglass, An American Slave’. He arrived here in September 1845 on the cusp of An Gorta Mór and travelled to Wexford, Waterford, Cork, Limerick and Belfast. His repeated visits to Belfast during the months he stayed in Ireland are an important part of our own history and a reminder that slavery was opposed by radical Presbyterians like  United Irishman, Thomas McCabe in Belfast in the late 18th century.

Ireland was in his own word “transformative” for Douglass.  It was, he said, the first time he felt like a man and not a chattel.

Douglass also witnessed the awful conditions endured by Irish peasants and this led him to see the issue of slavery not in isolation but as part of a wider campaign for equality and social justice. He wrote: “I see much here to remind me of my former condition, and I confess I should be ashamed to lift up my voice against American slavery, but that I know the cause of humanity is one the world over. He who really and truly feels for the American slave, cannot steel his heart to the woes of others...”

Douglass’s story is also a reminder that the evil of slavery is still with us. It is estimated that between 20 and 40 million people, including ten million children, across the world today live in slavery.

In January 1846 the Belfast Anti-Slavery Society held a breakfast in his honour. It was his last appearance in Ireland. One of the objectives of the event was to establish a Ladies Anti-Slavery Association. Mary Ann McCracken was listed as a committee member. She was also active over fifty years earlier in Thomas McCabe’s time when they stopped a slaving company being set up in Belfast. The event was attended by 250 people. As Douglass left Belfast he said:

“Wherever else I feel myself to be a stranger. I will remember I have a home in Belfast.”

AT the weekend the Belfast Telegraph published an opinion poll by the Belfast-based polling and market research company LucidTalk. As a matter of longstanding policy I usually don’t comment on opinion polls which deal with the electoral fortunes of our political parties. I see no reason to change this policy. So I will ignore the party political content and deal only with the unity referendum elements.

Imagine – without a plan or a discussion or a campaign – and with an Irish government opposed to the unity referendum, 42 per cent are already for a United Ireland.
Bill White, LucidTalk’s managing director, says that the fact that the pro-union vote has remained around 50 per cent should not be a surprise as “a united Ireland is still the unknown option, and although many people support the concept of a united Ireland, they would like to know a bit more about it, and how it would work.”

He’s right. So it’s up to us who want a United Ireland to let people know more about it and to explain how it will work. It’s time to plan for the unity referendum. The Irish government must take the lead. And if they won’t, then let’s change the government. More immediately, there is a need to ensure that everyone who can vote and who wants to vote has the opportunity to do that.

Whether it is next year’s Assembly election or the unity referendum, an effective election or referendum campaign depends on votes. Posters, social media, leaflets, canvassing and all the rest are hugely important in winning arguments and motivating voters, but it all amounts to just so much hot air if voters are not on the electoral register.

In July the Electoral Office in the North wiped the entire electoral register. An ambitious and comprehensive registration campaign to try and get as many people on to the new register as quickly possible is needed. It can’t be left to the Electoral Office or the political parties. Citizens who never vote in elections will vote in the unity referendum. But they can only do that if they are on the electoral register.