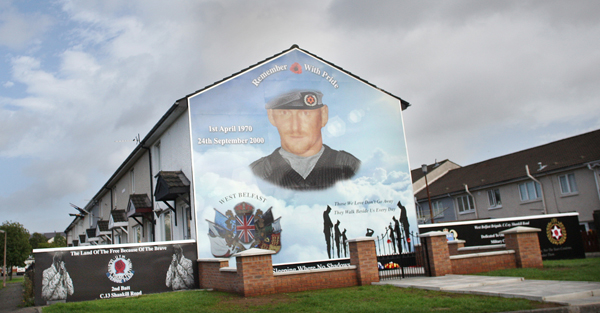 A tribute to UDA's Stephen McKeag in the Shankill

The niece of a Battle of Britain veteran murdered by the UDA says the poppy has been “debased” by its inclusion in a tribute to a sectarian killer.

And this week the Royal British Legion moved to distance itself from a new mural dedicated to notorious gunman Stephen McKeag on the Shankill.

McKeag was a ruthless sectarian killer linked to the murders of 12 innocent people, earning him the gruesome nickname ‘Top Gun’. He died in September 2000 from a drug overdose. While alive, he was a key member of Johnny Adair’s bloodthirsty ‘C Company’ UFF gang.

John Lovett, 72, became one of McKeag’s victims when he was killed along with two other men when a UDA gang burst into the James Murray bookmakers in Rosapenna Street in November 1992. He was shot three times and died later in hospital.

Bone man John was a WWII veteran who served with the RAF during the Battle of Britain before being shipped to India and Burma where he was captured by the Japanese and tortured in a prisoner of war camp. Speaking for the first time since his death, Maud Evans said she would remember her uncle as a “character” who would have done anything to help others.

“John had volunteered for the RAF and was on the south coast of England with them during the Battle of Britain. After that he was in India and then Burma and that’s where he was captured,” she said.

Maud said she’s not angry at the mural to Stephen McKeag, rather she feels that the poppy was being used inappropriately.

“I think the poppy has been debased and it’s not being used in an appropriate way,” she said. “It’s been sectarianised, but you can’t stop people buying them or using them as a symbol.”

Maud said she has fond memories of her uncle.

“You could have written a book about John. He was very good-natured and he would have done anybody a good turn. He liked a gamble and that’s why he was at the bookies. He didn’t drink and loved practical jokes.

“My mother always said John would have run from Belfast to Cork to get you a box of matches if he thought you needed them.”

John’s father Willie was a WWI veteran who was gassed and eventually died from shrapnel wounds.

A spokeswoman for the Legion distanced themselves from the mural.

“The poppy is a universal symbol of remembrance and hope, including hope for a positive future and peaceful world,” said the spokeswoman. “The Royal British Legion recognises the right of any group or individual to express their views within the law, however any attempt to use the poppy by sectarian, factional, or extremist groups is extremely inappropriate, and demonstrates a misunderstanding of what the poppy stands for.”