‘Quiet Man’ Ward excited ahead of Windsor clash with Collins 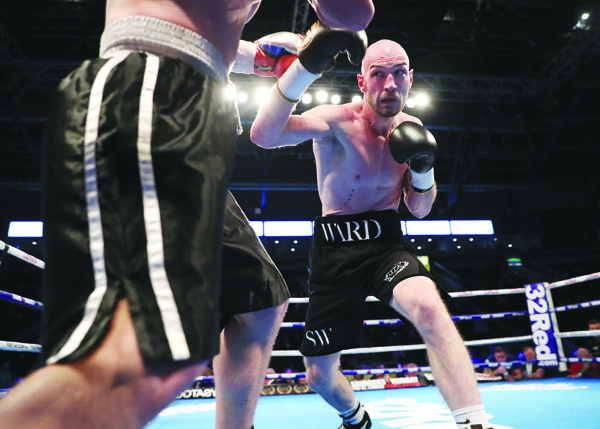 IT’S not just a dream coming true for Carl Frampton on Saturday night at Windsor Park, but Steven Ward is also beyond excited at the prospect of boxing at the stadium when he takes on Steve Collins Jnr for the BUI Celtic Nations light-heavyweight title.

‘Quiet Man’ Ward has enjoyed a steady start to life as a professional, winning all seven fights to date, but steps it up this weekend against Dubliner, Collins (12-1-1) who enjoyed two wins since his only career loss, to Paddy McDonagh for the Irish title last year.

This Saturday, he knows he is coming up against an opponent for the first time with ambitions of pushing on in his own career and he feels his preparations with trainer, Jamie Moore have gone well heading in.

“I haven’t seen too much of Steve,” said the 28 year-old North Belfast man who now resides in the south of the city.

“He’s a nice guy and like anyone, I’ll shake hands with them before and after. We are going in there to do a job, but I’ll just see what he’s like on the night. I feel as though I have had a great training camp, I’ve been injury-free after having a couple of niggles in previous camps.

“I have been getting great sparring with (David) Brophy who is similar as he is small, strong and stocky like Collins.

“That has brought me on, so it’s just about having a variety of things in the locker and adapting to the night.”

There was no hesitation when the fight was offered, as Ward knows this is an opportunity to step up and push on.

After a good amateur career, he believes he can move through the gears quicker as a pro and that all begins against Collins.

“It drives you knowing you are fighting someone who is coming to win and will want to put on a performance,” he said.

“Both of us have everything to gain from this fight, so it’s good to have something that gives you butterflies.

“Even when I was fighting guys who aren’t as good as Collins, I was still coming into camp and doing 12-week camps.

“I want to learn and see what they (gym-mates) were doing, lads like Rocky (Fielding), Martin (Murray), Tommy (Coyle), Frampton and Conrad.

“I have been used to doing the big stints so there’s nothing different. It’s just this time I knew my opponent early on and I can figure stuff out like tactics.”

He added: “ I don’t want to be hanging about.

“To be honest, I was just over the moon to be getting on the Windsor show and then I was offered Steve Collins Jnr for the BUI Celtic title and that was the icing on the cake.

“We jumped at that and I’m just thinking how it’s going to be if, all being well I get a good win and look good doing it.”