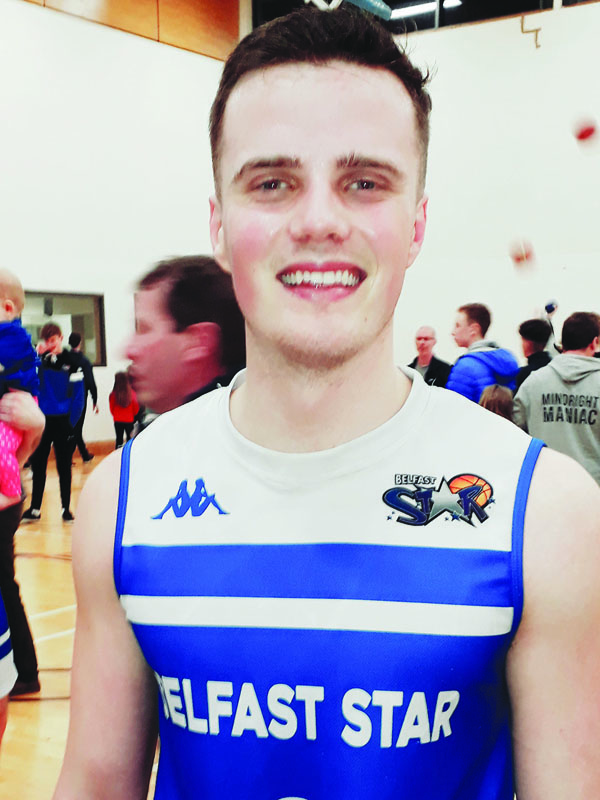 Aidan Quinn finished with an impressive 27-point tally against Killorglin

BELFAST Star got back to winning ways at the weekend, but now head to Dublin to face UCD Marian knowing that probably only a victory will keep their Super League title hopes alive.

Star currently trail league leaders Tralee by three points as the league goes into its final five games and they will be hoping that the Kerry side still have a slip in them – possibly against their local rivals Killorglin, the team that Star edged out 77-69 on Saturday night in La Salle.

Star got off to a superb start on their home court with in-form pair Aidan Quinn and Delaney Blaylock rapidly sending Adrian Fulton’s men to a 14-3 lead en route to a 23-11 margin at the end of the first.

Quinn was again dominant in the second, adding another 10 points to give him a 21-point haul in the first half and a Star lead of nine points, 44-35, going into the third.

Killorglin raised their game just after the break and a straight nine-point run inspired by veteran player-coach Colin O’Reilly unsettled the full house and left just one point between the sides until scores from Quinn, CJ Fulton and Swede David Jallow soothed home nerves a little, leaving Star ahead 58-53 at the close of the third.

So, with all to play for in the final quarter, up steps Delaney Blaylock to fire home a quick nine points – among them what has to be dunk of the season when he absolutely soared to slam a rebound home and send the home audience’s Tweeters straight to their phones.

Killorglin, however, still had another run in them and hit six unanswered points until crucial scores from CJ and Keelan Cairns saw Star wrap it up comfortably.

Speaking afterwards, head coach Adrian Fulton said: “I’m delighted the way we bounced back after a poor performance on the road against Moycullen. This was a real good, tough game.

“Killorglin are a super strong side with multiple threats. But Aidan Quinn was terrific for us, he really had the hot hand.

“Big Liam Pettigrew gave us great minutes off the bench and David Jallow had his best game of the season.

“Conor Quinn once again showed how big a miss he has been for us with some great play at both ends of the floor.”

And with a view to the Super League standings, he added: “Obviously, the league is very much in Tralee's hands now, but we’re on our own in second and just have to hang in there as best we can.”