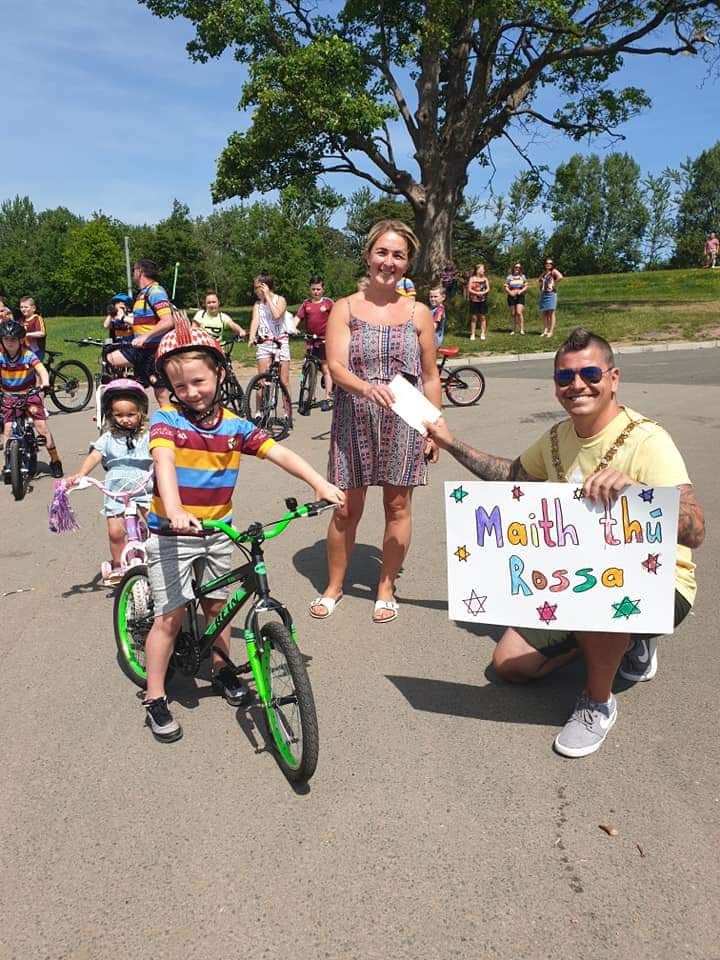 STEPPING IT UP A GEAR: Rossa and proud mum Caoimhe hand over his sponsorship earnings to outgoing Lord Mayor Danny Baker to go to NHS charities
PEDAL power was the driving force in the Falls Park on Sunday as six-year-old Rossa Doherty completed his month-long cycle to raise funds to purchase vital PPE for hard-pressed staff and volunteers at the NI Hospice.

The Bunscoil an tSléibhe Dhuibh pupil with the support of his family and friends cycled – no matter what the elements – throughout the month of May, raising £2,700. Rossa’s very proud mum Caoimhe told the Andersonstown News that her son asked her what he could do to help during the Coronavirus pandemic after seeing Body Coach Joe Wicks and Colonel Tom Moore do their bit.

Caoimhe said that the Falls Park is right beside the family home and she spoke of how dad Jim and little sister Connla as well as teammates from Gort na Móna GAC were on hand to cheer him on on Sunday.

“We are all so proud of him, he took it all in his stride,” she said. “There was a great turnout on Sunday to cheer him on and it was a great atmosphere.”

Asked what was next for her son and his fundraising efforts, Caoimhe laughed and said Rossa wants to complete the month of June “one handed on his scooter”.

As one of his last engagements as First Citizen of Belfast, Sinn Féin Councillor Danny Baker was there on Sunday to officially congratulate Rossa. He described the local boy and his efforts as “very special”.

“Rossa cycled around the Falls Park for four weeks, raising over £2,500 for the Hospice. Rossa is an amazing young man and this is what West Belfast is all about,” he said.