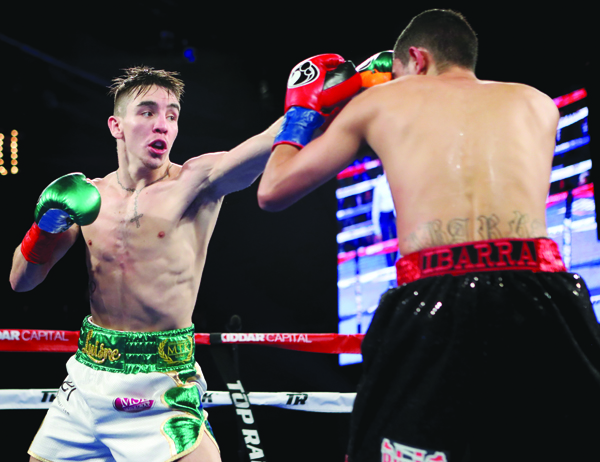 MICHAEL Conlan says he is relaxed and ready to build on his debut win over Tim Ibarra when he takes on Mexico’s Alfredo Chanez over six rounds at the UIC Pavilion in Chicago tomorrow night (Friday, approx 4am live on Box Nation, deferred coverage on RTE at 7.15pm on Saturday).

The Los Angeles-based 25 year-old enjoyed a memorable first outing in the pro ranks on St Patrick’s Day when he stopped Ibarra in their third round of their clash at the sold-out Theatre in Madison Square Garden.

This time the build-up has been much more relaxed with Conlan able to focus fully on the fight rather than the occasion and he believes this will tell on the night.

“There is a lot less pressure this time, so I’m able to just concentrate on the fight and enjoy myself,” said Conlan, speaking to the Belfast Media Group from the Windy City on Tuesday.

“I don’t have to worry about anything else, worry about the event because last time I had to worry about too many things. “This time I know there is a lot less pressure, so I have enjoyed it a lot more and I’’m just looking forward to producing a good performance now.”

The West Belfast man felt his performance was a little below par back in March given his eagerness to make a statement, but having had his first professional outing and sampled what life is like in the different environs of pro boxing, he expects to be a little more patient against his Tijuana rival.

“I did relax last time and enjoy myself, but my performance wasn’t relaxed because I was trying to impress too much,” he admitted. “This time I’m just focussing on being relaxed and perform, not rush anything. Place my shots, don’t just wing them, so I’m really looking forward to this.”

Trained by Manny Robles at the Rock Gym in LA, Conlan says he is adapting well to life in the United States’ West Coast both in and out of the gym and feels settled in his new home. Adapting to the slower pace of professional boxing over longer rounds takes time, but Conlan feels he has made great improvements from his first fight with top-class sparring against world champions and gym-mates, Oscar Valdez and Jessie Magdaleno as-well as Diego De La Hoya, cousin of the legendary, Oscar.

“With Manny and the guys in sparring, I feel like I’m improving all the time,” says Conlan. “That’s my main aim, to be one per cent better than what I was the day before. “Making the little improvements is my aim going to the gym every day. I feel as if I am learning something new every day, so I’m happy with how things are going. I feel like my style and Manny’s style are really starting to connect.”

His promoters, Top Rank have already shown great faith in the Falls Road man as he again tops the bill on Friday. Should all go according to play, he will return on the undercard of Manny Pacquiao v Jeff Horn in Brisbane, Australia on July 2 and Conlan is greatful for the opportunities he has been given so far and thankful for the support of the fans on both sides of the Atlantic.

“They have really shown faith in me and that’s great,” he agreed. “No-one has done what I’ve done and sold out Madison Square Garden for their debut. Even with it being on St Patrick’s Day and all that, who has had a first fight like that?

“It’s been great for them to do that. I am helping them and they are helping me. This show has been selling well already and this is only my second fight. I think there are something like 4,000 tickets sold and that’s amazing because I’m in America and relatively unknown.”

While perhaps unknown to the ‘casual’ sports fan in the States, Conlan is planning to change that as his career progresses and he intends to win some more fans this Friday by delivering a big performance against Chanez.

The Mexican sports a record of 4-4 with two of his wins by knockout while he has yet to be stopped. A win inside the distance would certainly make a statement and while Conlan knows the level of opposition in the gym is likely to be greater than what he will face on Friday, he knows he is coming up against an opponent who is out to make a name for himself. “He is going to come to win. Anyone I fight now is going to come to win,” he stressed.