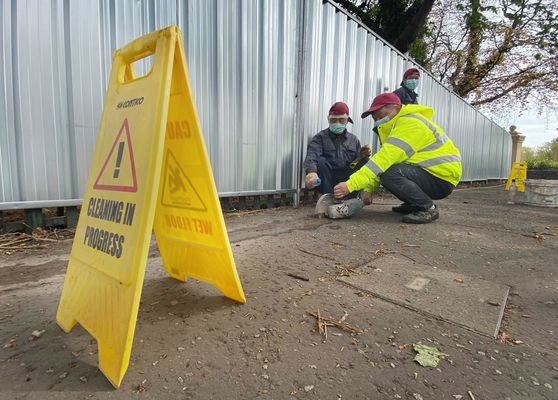 DON'T FENCE ME IN: Work continues on the security wall at the Chinese Consulate

SOUTH Belfast residents are pleading with the First and Deputy First Minister to intervene and demand a halt to the ongoing “unauthorized” wall being built outside the Chinese Consulate on Malone Road.

Martin McBurney, who lives in Adelaide Park and has been campaigning against the building work, is calling on  Arlene Foster and Michelle O’Neill to intervene.

Residents have argued that the work, including the erection of a large wall structure, is taking place within an important conservation area. Now Martin is calling for the Stormont leaders to intervene as a matter of “urgency” as every day that the works continue the more “harm” is done to community relations.

In June a High Court judge refused to order a halt to the building of the security wall.

The frustrated residents complain that the Consulate are ignoring their concerns and are continuing the work without engaging with them. This latest intervention comes at a time when Chinese relations with the West has soured with the US calling on the Chinese Consulate in Houston to close and tensions simmering with the UK government over Hong Kong.

“Ongoing unauthorised building work of a three metre wall, security pavilion and hut, new entrances and car ports at the Chinese Consulate is continuing without planning permission, and listed building consent,” Martin says in the letter to the Stormont leaders.

“The Chinese Consulate has shown little respect for their long term neighbours and our neighbourhood.

“The residents have been very patient and respectful of the Consulate. We understand they have security needs but they must appreciate that they are located within a residential area, occupy a beautiful Italianate BI Listed property, also with Listed Chapel, within the Adelaide Park Conservation Area, and in the setting of the Malone Conservation Area.

“The nature of the works are inappropriate to the Listed Buildings, the Conservation Areas and have damaged TPO trees. Fine detailing and landscaping are integral to the special quality of the area. The existing boundary hedge, sitting with the low boundary wall and between the listed pillars so in keeping with the character of the area has been removed and pillars damaged.

“A reinforced concrete wall has been built which is unnecessary in these times. The best security they could have would be their neighbours.”

Mr McBurney goes on to say that residents “feel totally powerless and have been left feeling totally violated” by the actions of the Consulate.

“It is very disturbing that the Chinese Consulate can come into a settled community and threaten our living environment with impunity. These are our homes and they have moved into the area causing harm and upset to the residents and the unique and special historic built environment and historic urban landscape.

“We made a reasonable request that they tell us what they are doing and that they engage conservation expertise/architect and re-submit a planning application that meets the needs of the conservation area.

“The Consul General rejected our request saying that the Chinese Authorities had instructed her to continue.”

“These works do not comply with Conservation Planning Policies and have caused harm to the mature TPO trees on the site. All done without permission from the planning office, without support of historic buildings, and the tree department and contrary to conservation planning polices.

“There have only been two days since February when there was no work on this site.

“When Belfast City Council threatened legal action in June the Consulate said they would halt the work in order to have discussions with the Council and the residents.

“The work did not halt and it continued over that weekend. I emailed the council photographs of these works at that time. In my view, this was just optics by the Consulate as the work has continued to this day.

“Currently the Chinese Consulate is continuing to create an unauthorised entrance onto Adelaide Park and has put up new large crude/standard gates.

“I am concerned that the Consulate will do the works on the footpath without planning permission and somehow get consent to amend the footpath from Department for Infrastructure(DFI). The same happened with the hoarding.

“The Consulate did not have planning permission to build the wall but DFI gave them consent to put up the hoarding. If it is possible, to stop or delay the entrance it may give us some leverage to mitigate the damage to the listed buildings and conservation areas.

“The Consulate may have diplomatic immunity but they should comply with UK planning laws and respect their neighbours and our heritage.

“I understand Belfast City Council have decided not to pursue an appeal to the court judgement but they cannot leave the residents in limbo.

“We feel totally powerless and we reach out to you to give us a voice and to support us in our campaign for the Chinese Consulate to respect their neighbours and our neighbourhood. This is our right and something that needs protected.”