Return of the ‘Mac Attack’ 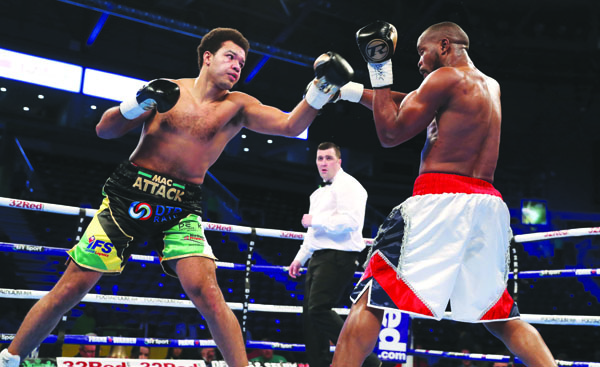 Tommy McCarthy has not boxed since his points win over Blaise Mendouo at the SSE Arena one year ago, but is hoping Saturday’s fight at the Shorts Sports and Recreation Club is the start of regular and meaningful action Photo by William Cherry/Presseye

A HUGELY frustrating 12 months will come to an end for Tommy McCarthy at the Shorts Sports and Recreation Club on Saturday night when he makes his first return to action on the ‘Back In Belfast’ fight card.

The 28 year-old Lenadoon cruiserweight will have been out of the ring just one day shy of a year exactly when he steps through the ropes for a six round contest (opponent TBC), but under new manager Mark Dunlop, the ‘Mac Attack’ is hoping to use this is an opportunity to blow off the cobwebs ahead of what he hopes to be a big 2019.

Last time out, he scored a points win over Blaise Mendouo just weeks after dismantling Peter Hegyes in one round following another year out of the ring.

Having again spent more time in the gym than under the lights it was time for a change and Dunlop, who guided James Tennyson to a recent world title opportunity, has been the man tasked with getting McCarthy’s career moving once again.

“This Saturday marks a year exactly so this is just a comeback fight to stay in the rankings and shake the cobwebs off,” explained McCarthy who is aiming to build on his 11-1 professional record to date.

“I’ve done loads of sparring this year and over the past 12 months, I had the best sparring anyone could wish for. Sparring and fighting is different, so I just need to be in the ring and to stay active. Mark Dunlop’s the man who keeps his fighters busy.

“One thing that stood out to me was earlier this year, Paul Hyland was due to fight (David Birmingham) and a lot of the fights were cancelled, but Mark kept the show on so Paul could have that fight. Nobody would do that, but I know Mark did and he can get me to where I want to be.”

It’s not that McCarthy has been tipping away in the gym stagnating, as he has been sparring some massive names such as former cruiserweight champion Mairis Briedis, Carlos Takam, Beibut Shumenov and Hughie Fury who have all been getting ready for massive fights.

His performances in those spars helped convince him that he has the talent to make it to the top and simply needs a consistent run to get himself back up the rankings.

“The sparring I have had is the stuff you get to gear up for a world title,” he agreed.

“It’s been a great experience and these sparring camps are the type that have helped me keep the faith in my own ability. Last year has been so frustrating I started to think if I should pack it in and that I’m maybe not as good as I thought.

“Then when I was going out there, I was boxing out of my skin. The coaches and boxers were telling me how good I was so that has given me the belief that I can do something and can make it.”

McCarthy had been on an upward trajectory following a win, live on Sky Sports against Jon Lewis Dickinson back in 2016.

That led to a British title eliminator against Matty Askin in Manchester, but things didn’t go to plan as he had to pick himself off the floor twice in the fourth round on his way to a points defeat despite a fine rally in the later stages.

That defeat two years ago effectively froze him out of the title picture with that two-fight burst last year all he has had since in terms of competitive action.

Therefore, it’s time to start again and beginning this Saturday, Tommy returns as he looks to get into title position.

“Maybe one or two warm-up fights and I’ll be back able to challenge again,” he predicts.

“The whole thing with Askin just derailed everything and I don’t think it needed to be as dramatic as it was and to have the effect it’s had on my career. I still have a high ranking on BoxRec and I know that doesn’t mean much, but it just goes to show that my talent is still recognised.

“The opposition I’ve had in my fights has been high quality and there aren’t many who have been moved the way I have, so I want to get up in those big fights. I’ve had the taste for it.

“When you fight live on Sky that’s great, but to come back down and fight (Askin) in Victoria Warehouse in front of nobody was a big downer for me. Going from top of the bill to being on at four o’clock in the day is crap, so I want to get back up to being a headliner again.”

Rest of the card
Elsewhere on the card, Luke Wilton also returns to action when he takes on Georgi Georgiev over six rounds at bantamweight.