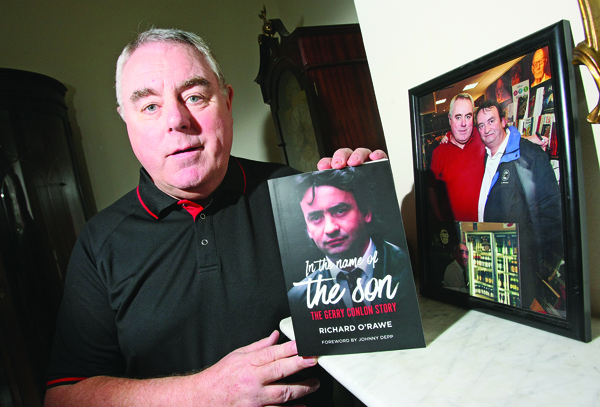 BIOGRAPHY: Richard O'Rawe with his newly published book 'In the Name of the Son,' about his friend Gerry Conlon

“I HAVE a quare story in me O’Rawe and I want you to write it,” recalls West Belfast author Ricky O’Rawe, regarding a conversation with life-long best friend and confidante Gerry Conlon. O’Rawe’s powerful and candid book, In The Name of the Son – The Gerry Conlon Story has been lauded by critics since its launch last week.

Speaking to the Andersonstown News from his Glen Road home Ricky spoke of how the book, which was three years in the making, was “so emotional to write, very difficult but I’m glad I wrote it”.

Gerry Conlon, who along with three friends was wrongly convicted of the IRA Guildford pub bombings in 1974, died three years ago.

“About eight months before Gerry died we were both in the town – we used to go out for breakfast every week, sometimes meet for a pint, or go to see a play. As we were walking up Royal Avenue, Gerry stopped at the cash machine, he told me he wanted me to write a book about him, about his life. He was very adamant that I was to do it and I said okay, sure we’ve plenty of time. Not that long after I got a call from him and he said he was in the hospital. I turned round and said ‘what are you doing in the hospital?’ Gerry said ‘I’m not good O’Rawe, it’s bad, look it’s bad, just get down and see me. When you get down bring down two fries’.

“So I did. He had a good dig at the food, Gerry was a good grubber. He told me, ‘I don’t think I’m going to do’. Ann his sister had already told me he had cancer throughout his body but that he didn’t know this until he went into hospital.

“We had a private conversation and then he said, ‘Will you do the f**king book? Promise me you’ll do it.’ On the way out the door he shouted ‘I love you’ and I said ‘I love you too’ and that was the last I seen him alive,” he said.

Richard spoke of how the two had grown up next door to each other in Peel Street, off the Falls Road.

“I went into the republican movement but Gerry wasn’t political, the Conlon family weren’t political, they just hadn’t got any politics. So Gerry went across the water and he was living in London getting a job here and there as you do.

“I was in the Crum for a charge when I heard the name Gerry Conlon about Guildford and I couldn’t believe it. Right from the first second I knew that Gerry Conlon had nothing to do with this. He wasn’t in the IRA, he wasn’t a republican and he would’ve told you that. He wasn’t in anyway political. I knew the IRA wouldn’t have taken Gerry either as he wasn’t IRA material and once I heard his name I knew he was innocent – you just know,” he said.

“Whenever he got out we were together – me, Gerry and Brendan ‘Darkie’ Hughes. We went to Fat Harry’s for a drink and at the time he wasn’t really living in Belfast when he got out.”

Ricky said that during this time Gerry was “a tornado” in pursuit of giving the Birmingham Six justice and he was back and forward to America.

“When you were reading about him it seemed like he was living this jet-set life but you don’t know the other side though.

“Because you have sort’ve been inoculated towards the whole prisoner experience because you have an ‘ism – a republicanism to back you up – you have comrades there who are going to lift you if you are down in prison, that strength of the belief.

“Gerry didn’t have any of that, Gerry just ended up in jail basically saying ‘what the f**k am I doing here?’ Little did I know how psychologically damaged Gerry was and he never particularly talked about it. He kept it to himself, it was as if it was his pain and it wasn’t to be shared.”

Ricky continued: “He carried the guilt about his father Giuseppe to his grave. When Gerry was arrested by the cops, he was beaten, he was naked in a cell, he wasn’t the first beaten into making a false confession, but he didn’t confess about his father, he just signed a bit of paper that the cops wrote out.

“I said to Gerry that the guilty party was the cops who beat you and the judiciary who framed you. This just wasn’t a miscarriage of justice that was an old fashioned frame up and I used to keep saying that to him and I was proved right.

“But he was immune to personal salvation. As far as he was concerned he was the guilty party. Paddy Hill of the Birmingham Six has the same sort of guilt. He ended up away from his family for 17 years and again I said to Paddy ‘it’s not your fault either’ but these guys, these poor craturs you can’t get through to them, well, to Gerry anyway.”

Asked what he hoped to achieve through the publication of the book Richard said: “I want natural justice.”

“The British government got away with an atrocity here. Not only did they put Gerry Conlon, Paul Hill, Carol Richardson and Paddy Armstrong in prison for 15 years and the Maguire Seven imprisoned, a swathe of innocent people away for all those years, but they also condemned the families outside. Sarah Conlon had to work in the Royal Victoria Hospital kitchens to save up the money to be able to go over and see her husband and son twice a year in prison. The Conlon family was devastated by all this.

“The British government thought by giving an apology that was it done with – it’s not done with. Kevin Winters [solicitor] and Ann Conlon [Gerry’s sister], it’s Ann who is driving this. She wants anyone who broke the law – and you are talking about the whole establishment here – in the Guildford Four, Maguire cases brought to book and she is just right. It was a frame-up, a disgraceful episode, it’s beyond words.

“As Gerry Conlon once said to me ‘justice doesn’t have a sell by date’.

“Gerry was just a great friend, along with his family. I along with Gareth Peirce [his solicitor] was called for when Gerry was in hospital, that shows you how close we were. The whole book was so emotional to write, very difficult but I’m glad I wrote it and I want justice for him. I want justice for the rest of them. I think they deserve it. I don’t think it’s right that the British can just turn round and say ‘go away and leave us alone’. It’s not going to happen, it’s not going to go away.”

In The Name Of The Son –The Gerry Conlon Story, by Richard O’Rawe is available in bookshops and online now priced at £15.99.