Rising star Alanna gives hope to those in distress 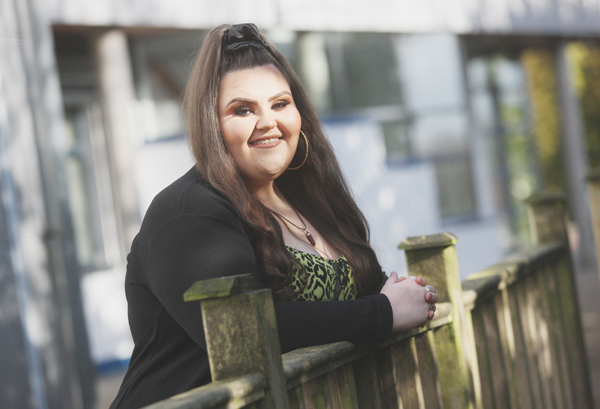 PERFORMANCE: Alanna Flynn will sing at the Spring Ball as well as release her new single and album

A SPRING Ball is set to take place at the Devenish Complex with all proceeds raised from the night going towards the vital work of mental health awareness charities.
‘Stand By Me’, the brainchild of local man Daniel McGinley, will take place on Friday, March 6 and will feature an array of vocal talent including the launch of ‘Hidden Hope’, the new album and single from rising Twinbrook talent Alanna Flynn.
A songwriter since age of 11, Alanna told the Andersonstown News how music has always been an important part of her life and how songwriting helped her through her own struggles with mental health.
“I have always wanted to make an album for charity and the reason why the proceeds raised from it and the single will go towards Suicide Awareness and Support Group is because I’ve struggled with my own mental health,” she told us. “I went through a really dark period of time, I know what’s it like to be in a dark place. Music has been my escape in a way and that has really helped me to where I am today.
“Music and songwriting really helped me, I always found it hard to open up, talk about my feelings and emotions. I found that writing it down was a way to get how I was feeling off my chest.”
Alanna said she hopes her music will go some way to helping people in distress amidst the suicide crisis in the city.
“I would never want anyone to feel like they don’t have someone to talk to. The suicide rates just keep going up and up every year. Mental health, struggles with mental health, is a sickness, it’s a sickness you can’t see but it’s there. Everybody’s mental health struggles are different. With the release of the song, the album, I hope when people hear it it gives them a bit of comfort, to hear that there is always hope”.
Alanna will be attending as well as performing on the night of the ball along with fellow artists Joleen Burns, Leah Hawkins and Second Nature.
“Invitations have gone out to MPs from across the city to attend and whoever shows up is showing their support for this cause.”
Alanna spoke of the pressures facing young people as they prepare to leave school for the next chapter of their lives.
“For your entire life you are being looked after by your mummy and daddy and then, all of a sudden, it’s like you need to know what you want to do with your life. A lot of pressure is put on you, you’re made to do your UCAS form in school, there were people who didn’t want to go to uni when I was at school. I got accepted to go to Liverpool for Performing Arts but when it came to it I didn’t want to go, as much as I would’ve enjoyed the experience I just knew it wasn’t for me. Young people look to drugs, to alcohol, to feel better as they don’t have all the answers at that stage in their life.”
She continued: “I do think we need more resources in our mental health services. This Ball is a way to help those charities that are helping others. It will be a positive night and a chance to hear that there are people that you can depend on. There will be people speaking about their own experiences but ultimately it will be an uplifting night. A big ‘ball’ of happiness for everyone on the night.
“I’d like to thank Supervalu in the Dairy Farm and 4ver Photos along with other businesses who helped get the album made and for their support and I’m looking forward to people hearing it.”
• The Stand By Me Spring Ball will take place on Friday, March 6. Tickets are priced at £50 which includes a three-course meal and champagne reception. For those not wanting to partake in the meal, £20 is payable at the door. Tickets are available from the Devenish reception or by contacting Danielmcginley70@gmail.com.
Alanna’s Hidden Hope will be available on iTunes, single priced at £1.99.
Proceeds raised on the night will go towards Suicide Awareness and Support Group and PIPS Charity.