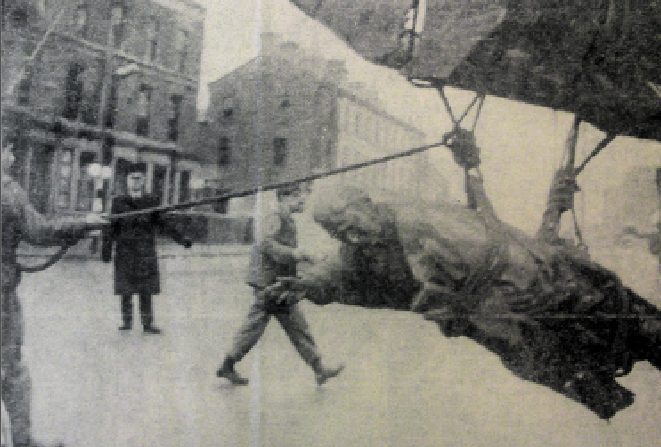 In the early hours of Sunday, March 1, 1970, Sean Kelly from the Upper Newtownards Road received a phone call from a taxi driver friend asking for his help to change a wheel. He was astonished by what he saw. It was, literally, the beginning of the end – the removal of the evidence of the existence of one of Belfast’s notorious hell-raising clergymen.

A  man of God's word to some, a preacher of hate to others, because of his volume and power, the 19th-century Presbyterian minister was known as 'Roaring' Hugh Hanna. Hugh Hanna was born in Dromara in 1826. He originally worked in commerce but took a teacher training programme and began teaching in Townsend Street in 1843. Eight years later he was licensed to preach by the Presbytery of Belfast and embarked on a career which was to see him become one of the most controversial men in Belfast in the 19th century.

He began his work with lapsed Christians in St Anne’s Buildings off Donegall Street. His style of preaching attracted many adherents and soon he established a congregation in Berry Street which grew rapidly. Hanna was no ordinary preacher. He used a mix of melodrama, anti-Popery, and he brushed with authority when it suited. He took part in outdoor preaching on the quays in association with Rev Canon McIlwaine of St George’s, High Street and others. He said he was trying to reach “the non-church-going crowds”. He knew that there would be opposition to this and when he and his fellow open-air preachers were attacked he sought – and readily gained – the support of the men of the shipyard. The certainty of riot and counter-riot helped swell the crowds and he developed his skills in whipping them into a frenzy. He then turned to holding revival meetings in his Berry Street church. Meetings were held every night for six weeks throughout the summer in 1859, attracting massive crowds.

At these meetings lay converts appeared. On one occasion two lay converts from Connor were introduced to the congregation. Rev Hanna told them “God owned them.” One woman fell down in the pew as if she had been smitten with an invisible but restless energy. She cried out for mercy. The congregation were greatly impressed and the promise of even more converts at future meetings ensured full houses, with people reluctant to depart at the end.

He next organised a mammoth outdoor mission in Botanic Gardens in August 1859 when people came in their hundreds of thousands from all over the North. The trains were crowded and the rail termini congested. Although several ministers took part, ‘Roaring Hanna’, as he was now known, was the star of the show.

Within ten years he convinced the Presbyterian Synod to allow him to build a new church at Carlisle Circus. St Enoch’s was completed and opened in 1872 at a cost of £10,000. He knew how to mix religion and loyalism and he organised a Sabbath school outing annually. All the Sunday school pupils were brought by train to places such as Portrush or Bangor. The paraded to and from the railway station accompanied by as many Orange bands as could be mustered. Each year the parade was followed by several days rioting in and around Carrick Hill. It was through these activities that Carlisle Circus became one of the main starting points for Orange parades in the city.

The letters HH stood high on the building almost invisible to the passer-by, giving an indicator of the boosted ego of Hanna. He was famous for his anti-Papal lectures and sermons. He was an ardent Conservative opposed to Irish Home Rule, addressing meetings not only in Ireland, but in England and Scotland. He was awarded an honorary doctorate and made a military chaplain, enabling him to minister to regiments such as the Black Watch.

His oratorical style and his strict sectarian outlook meant that even within the Presbyterian Church he was not universally appreciated. As a contributor to sectarian division and disturbance in Belfast, Hanna achieved his greatest fame or notoriety. Like many evangelical ministers, he was a regular open-air preacher. Such preaching was primarily evangelistic but was occasionally perceived as anti-Catholic. In summer 1857, sectarian tensions in Belfast were so explosive that the magistrates asked the Church of Ireland clergy of the Belfast Parochial Mission to abandon a proposed series of open-air addresses. Hanna, encouraged by Dr Henry Cooke, regarded this as a denial of liberty to preach the Gospel and insisted on preaching. Riots followed and the commission of inquiry into the origins and character of the riots specified provocative open-air preaching as a major cause of the violence. Again in 1886, when tensions over the first Home Rule Bill erupted into violence, Hanna's pulpit attacks on Gladstone's government and his allegations that Roman Catholic policemen from other parts of Ireland had been brought to Belfast to crush resistance to Home Rule were regarded as having contributed to the explosive situation.

An admirer, writing a few years after Hanna’s sudden death, said: “Preacher, lecturer and educationalist, as he has variously been described, Dr Hanna had few compeers. His political leanings were strongly Conservative. The records of the General Assembly  contain no minute regarding him, but his memory is perpetuated not only in the fine pile of buildings at St Enoch’s and the bronze statue erected in Carlisle Circus...”

As Sean Kelly and his friend began to change the wheel of the taxi in Carlisle Circus they observed three youths approach the statue of Hugh Hanna at 3.20am. One of them was hoisted onto the plinth and placed a plastic bag between the legs of the statue. The youth dropped back to the ground and all three walked up the Antrim Road. Just then two British army Land Rovers entered Carlisle Circus. The taxi man hailed them and told them what he had seen. One of the soldiers had a look and told them he thought it was a bag of sand. One of the Land Rovers left to contact Army GHQ and the others remained some 30 yards from the statue. Some time later two men passed close to the statue and just moments afterwards  the bomb exploded, hurling the three soldiers into the air. The explosion was heard all over the city and the figure of Roaring Hanna ended up on the roadway. Just hours later an Orange parade passed the empty plinth. The statue was “taken into care” by Council workmen and eventually repaired. There were several suggestions that it be restored, but in 1995 it is said that police advised against this course of action.

Claimed to be the largest Presbyterian church in Ireland, St Enoch’s had a magnificent theatre-like interior with two tiers of galleries around three sides, and four great roof lights above. St Enoch’s was tragically destroyed in a malicious fire in 1985. It lay unrepaired for some time before being demolished. The demolition contractor, Ted McCormick, told me that the black stone used in the building had originally been white but was discoloured by pollution. The site is now occupied by the Hopelink Centre. Where Hanna’s statue stood, there is now a small monument.

Hugh Hanna’s religious and political activities continued to divide opinion. A biographer of 1890 describes “a mind that combined strong Protestant convictions after the Scottish pattern with a spirit of British patriotism.” Ian Paisley wrote that “Dr Hanna was in the great evangelical succession of Ulster Protestant protagonists.” For another twentieth century author, Hanna was simply “notorious”.

On 26 September 1857 Punch lampooned Hanna in a series of verses, one of which ran:

To one who boasts an inward call,