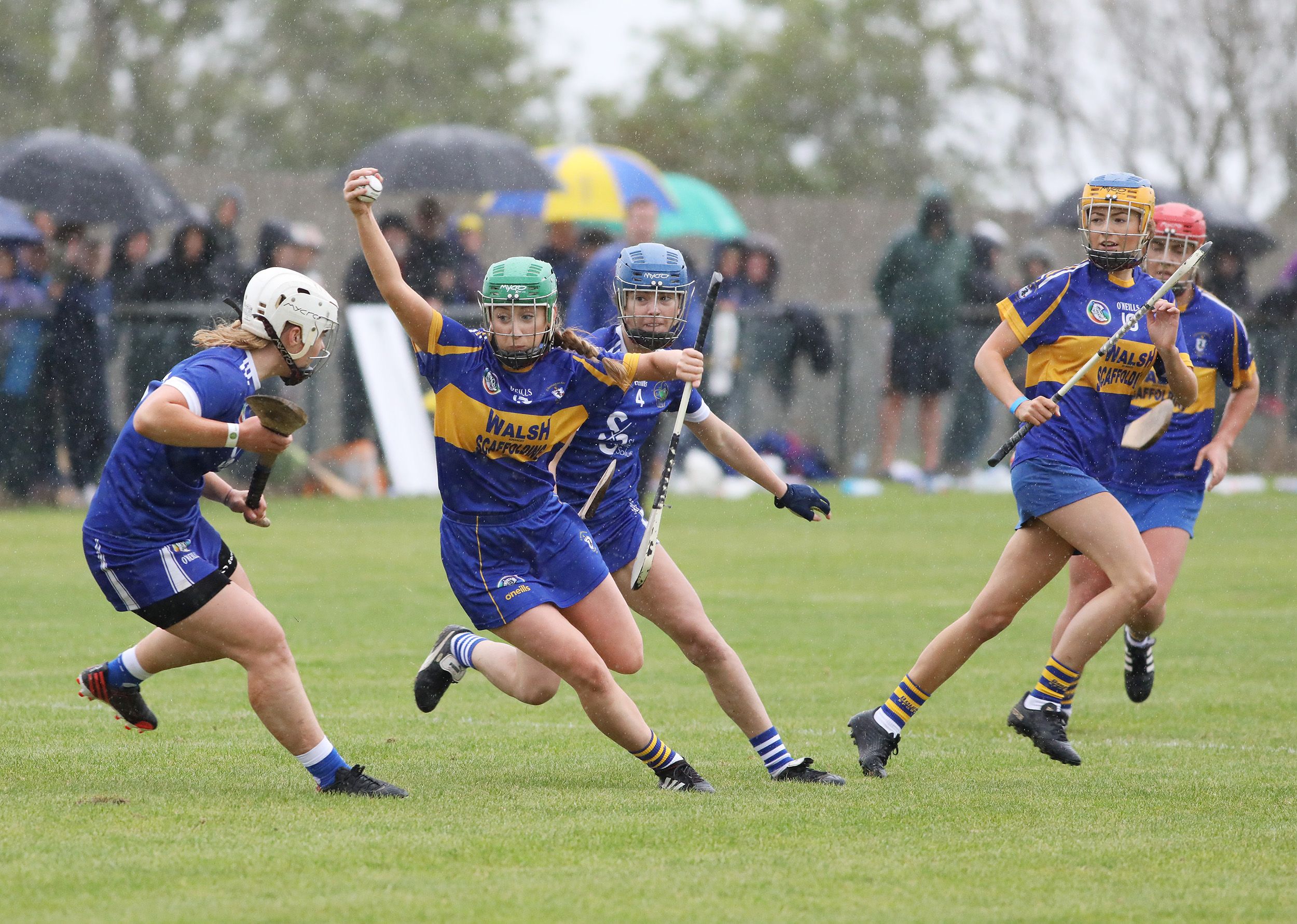 ROSSA and Tír na nÓg must do it all again to decide the winners of this year's Antrim Intermediate Camogie Championship as they played out a low-scoring draw at a wet Hightown on Saturday.

This was a hard-fought encounter between two evenly matched sides who were never more than one point adrift at any stage of the game.

Indeed, the Randalstown outfit trailed just once in the game, but any time they nudged ahead, Rossa found a response to get back on terms and in the end, a second day was probably a fair outcome for both.

Aine Devlin was the only Tír na nÓg scorer with five of those coming from frees, whilst Rossa had a better spread but were unable to make the most of their second half dominance to hit a winning tally.

Emily Falloon was in fine form for Tír na nÓg and was always threatening, but credit to Rossa's defence that held firm and shut the door anytime the Randalstown outfit looked like they might break through.

For the city side, Eimear Byrne was outstanding, as was Muirín Quinn who anchored the defence superbly and the Rossa side will take a lot from this game where they seemed to grow stronger as the game progressed.

It took just seconds for Tír na nÓg to take the lead as they broke forward from the throw-in with Devlin gaining possession and pointing.

They made the better start with the wind in their favour, but Rossa battled well and began to settle with Natalie McGuinness levelling matters from a free.

This would set the tone for the game with the sides going score-for-score with Devlin and McGuinness trading frees, but Tír na nÓg found themselves with the first goal opportunity on 10 minutes when Falloon made a superb catch on the left of goal and found herself in, but seemed in two minds whether to pass or shoot and in the end, the ball across goal was swept clear by Rossa.

Another exchange of frees from Devlin and McGuinness preceded the water break as the rain grew heavier and the same pair were at it again from placed balls after the restart before Rossa got their first from play as they worked the ball upfield superbly to create an opening and Sarah Armstrong was on hand to drill the ball between the posts.

This gave Rossa the lead for the first time in the game approaching half-time but Tír na nÓg hit back in stoppage time with Devlin firing in a short that clipped the top of the crossbar and went over to leave the sides level at 0-5 by the break.

The teams continued to battle it out after the restart but the scores dried up in contrast to the conditions as they both adapted to the wet contains that made life difficult.

Tír na nÓg were back in the lead seven minutes in when Devlin pointed a free and after McGuinness was off-target with a few of her own, Mairiosa McGourty assumed responsibility and tied the game yet again as the sides were now locked at 0-6 entering the final quarter.

It was very much up for grabs at this point with both going in search of scores and Rossa came close to what would have been a decisive goal on 52 minutes when a high ball was batted away by Tír na nÓg goalkeeper Aimee McAtamney and dropped to McGourty who pulled on it only to see the ball roll across the face of goal and outside the right post.

There was a sense that Rossa were the more likely to win it, but they couldn't fid the scores and it looked like they would be made to pay on 57 minutes when Devlin converted another free to put the Randalstown girls back in front.

Rossa were now desperately looking to get back on terms and they didn't panic, continued to try to work the ball into the scoring zone and this would pay off as a 45 that was tailing right was kept in by Sarah Armstrong with the sliotar worked to McGourty who hit the equaliser that would see the game finish even and both teams needing to do it all over again.