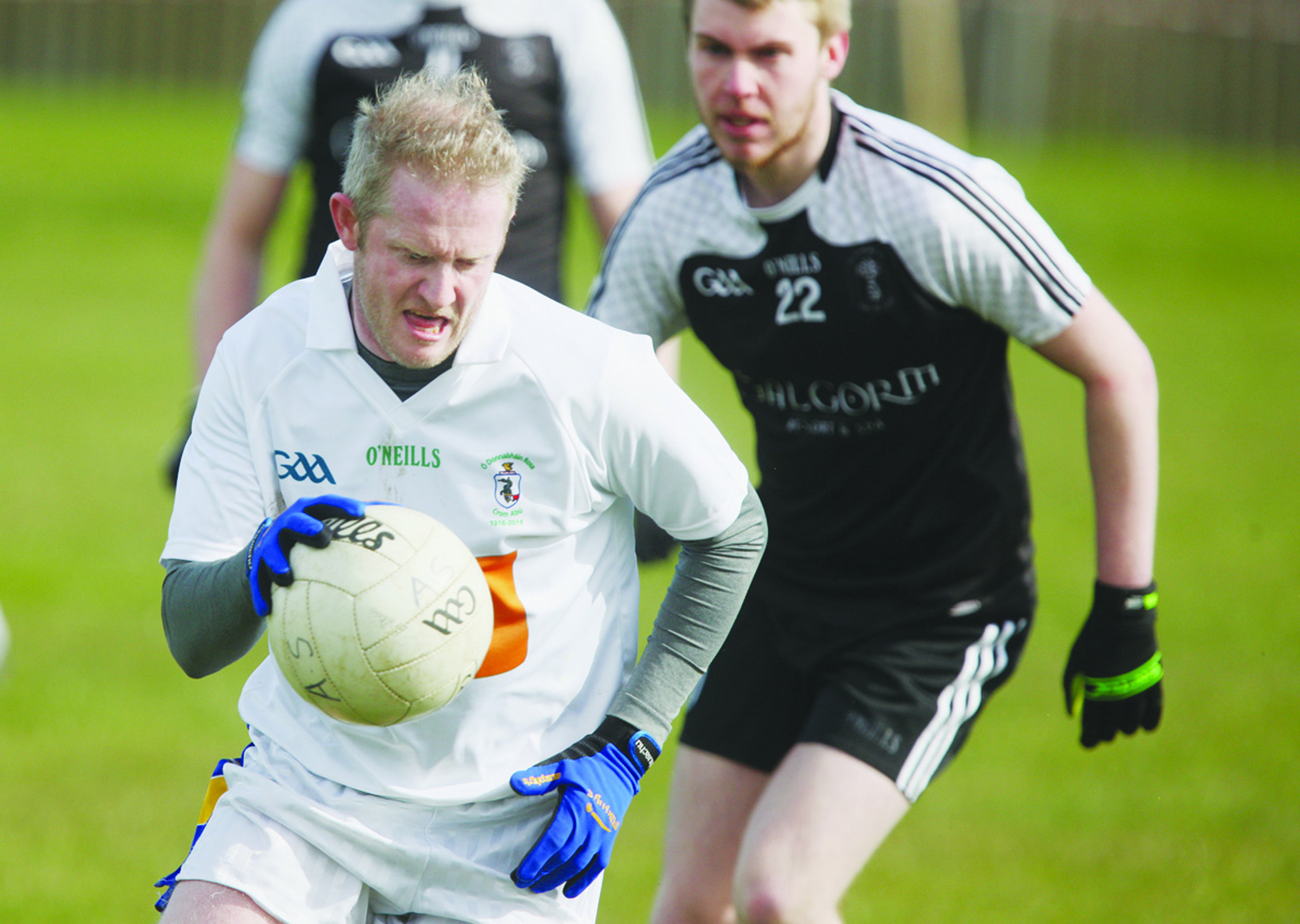 ROSSA manager, Paul Close is hopeful his side’s hectic season won’t catch up with them when they take on St Brigid’s in the Antrim Senior Football Championship preliminary round clash at Lámh Dhearg on Sunday evening (7pm).

The West Belfast club have 17 players who feature in both codes so have had a busy couple of months with the games in hurling and football coming thick and fast. Having secured their top flight status as they qualified for the A section of the league post-split, Rossa have found themselves without a win in five games but given the demands placed on their players, it has been a case of getting through games of late as they prepare for Championship season that is now upon us.

“The only thing that is killing us a bit is that was have probably played double the amount of matches as anyone else,” said the player-manager. “There are 17 of our squad who play hurling so for the 14 or 15 football league games that St Brigid’s have played, we have played 28 because we have been playing Wednesday-Sunday relentlessly.

“That means players pick up knocks and injuries that are hard to shake, but the lads have been grinding it out. “The other thing is the intensity of our training isn’t what it could be as on a Tuesday you are getting ready for a game on Wednesday and on a Friday you are still recovering from the previous game and getting ready for another one on Sunday.

“What we did was to have a good pre-season to get a good base to build on. Thankfully the majority of our squad is under 26 so they would be fit as fiddles anyway and a lot would do their own work in the gym.”

Rossa will be without four key players for this week however. Conor McClelland suffered a broken nose and cheekbone in a hurling game against St John’s a fortnight ago while Chris McGuinness has pulled a hamstring.

Eoghan O’Neill will only return from honeymoon at the end of the week so won’t be in contention while Richard Gowdy is out of the country at a soccer trial.

“If we turn up and play to our potential then we know we can beat St Brigid’s, but on paper is one thing and they will have been totally focussed on playing football and Championship,” Close accepted.

“We are only turning our hand to Championship this week because of the number of fixtures we have so we know it will be a hard game and extremely tight. I would only think there will be a couple of points in it either way.

“We feel we are quite solid at the back, but because we haven’t had the opportunity to do much shooting, that can let us down. Our decision making, because we are such a young team can be quite wayward at times, but we will be hoping we can do a job.”

These sides have met already this season when playing out a 2-10 to 2-10 draw in the league back in May, so another close contest could be in store. Rossa have some fine players in their ranks with county star Michael Armstrong central to their hopes while Colm Fleming and the pace of Deaghlan Murphy can cause any defence headaches.

With the right preparation, Close feels his side – who came within an ace of reaching last year’s final – can compete with most teams in the county and is hopeful that if they perform this week then they will have a quarter-final to look forward to.

“We had a good, strong team out against St Gall’s a couple of weeks ago and because we had no hurling the Sunday before, we could have football training on Sunday and again on Tuesday before playing them on the Wednesday,” he explained. “They only beat us by two points and we had a man sent off, so after that, we started thinking we aren’t too far away and if we put in the effort for a few weeks, we can see how we go against St Brigid’s so we aren’t looking beyond that.

“We’ll take this week as it comes. If we play to our potential, we have a good chance of winning but we know it’s not going to be easy.”

For St Brigid’s manager, Eunan Conway, this weekend is something of a distraction with his side locked in a relegation battle in section 1B of the league so staying in the top flight is their main focus, not Championship progress.

Having won their last two fixtures including a one-point victory over Portglenone on Sunday, the Musgrave Park outfit have given themselves a fighting chance of staying up with two games remaining, so this weekend’s Championship clash is taking a back seat according to Conway.

“We are more concerned about relegation than a Championship run if truth be told,” he said. “We are struggling to pick up league points, so Championship hasn’t been on our radar or agenda and it probably won’t be until Thursday or Friday when we get together.

“It’s as low-key as that because the priority is to see if we can stay in Division One. “It’s the complete antithesis of anything you would understand about Gaelic football, but we are trying to stay in Division One and a Championship match is actually a distraction rather than a bonus or something to look forward to. Our priority has to be getting League points, so this isn’t something we are eagerly anticipating.

“Having said that, it’s the next match on our radar and we just have to regroup and see where we are so we can focus on Sunday, but it certainly hasn’t been the focus of attention for the last few weeks.”

As with many clubs in summer, holidays and travel will mean several key players are missing for St Brigid’s with Ben Sinnot – who was training with Antrim earlier this year – away. Mark Reynolds misses out with a hip injury, while Brian McMahon is out with a knee injury but Conway believes this gives others the chance to come in and show what they can do although he feels his side a some way off challenging at senior level.

“Jack (Dowling) and Ronan McGrady are guys who were on the county panel this year, so we have those,” he added. “Ryan Daly – who was on the county panel – is coming back and played ten minutes on Sunday. He is recovering from a broken hand so he wouldn’t be up to pace to play a full game. Ryan will be a miss as he has a cool head and he is steady hands.

“We haven’t much of a Championship tradition of late, so it will be a big ask for them to perform against a team who were very unlucky not to get to a county final last year. Anything we do get out of this will be a bonus.”

South Antrim hurling final Rossa’s South Antrim hurlers are also in Championship action when they take on rivals, St John’s in the McGuigan Cup final at Rossa Park (12.15pm). Rossa were champions two years ago, but lost in last year’s decider so will be hoping to regain the title against a side they defeated by four points in the league this year.

“That was a close, exciting game,” said manager Raymond McDonnell. “This year being our centenary we were hoping to go undefeated and win the McGuigan Cup so we are halfway there.”