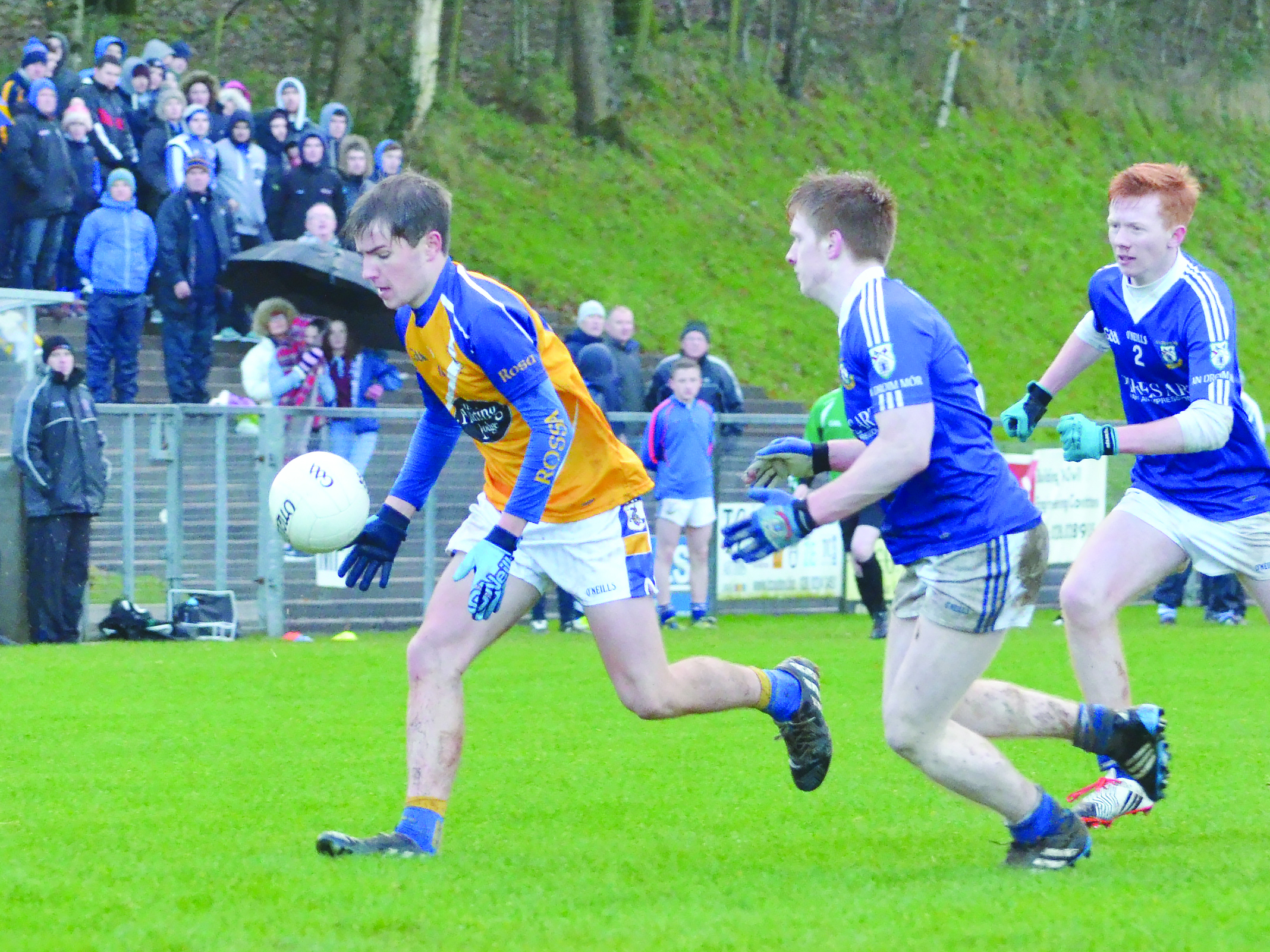 O’Donovan Rossa U16s will bid to recapture the prestigious Paul McGirr title when they face Clann Eireann at Dromore on Sunday (2pm).

A plethora of sporting fixtures bit the dust last weekend due to heavy rain across Ulster.

However, despite the deluge of rain, the hard working grounds staff at Gardrum Park ensured that both U16 semi-finals went ahead as scheduled. Rossa’s game against hosts, Dromore was subject to a pitch inspection but the game was given the green light.

Yet, the tough underfoot conditions may have suited a small, nibble Rossa side according to joint-manager Hugh McGettigan.

“It was great work by the grounds people down there. When we arrived, there must have been 15 people out working on the pitch,” said McGettigan.

“They had played a match on Saturday – O’Donovan Rossa from Magherafelt against Clann Eireann.

“It was played in terrible conditions and it didn’t really stop running so they had a pitch inspection to make sure it was on.

“It was hard conditions for both teams. We got a couple of early goals against them.

“We were a smaller, lighter team. In those conditions, it probably suited us better and maybe we adapted to the conditions better.

“They had a couple of big midfielders who will probably be gracing Clones in a couple of years time - they will be running about like greyhounds. In the quagmire of Dromore they couldn’t really get their legs moving.”

While Rossa have scored impressive victories over Southern Gaels (Cavan) and Dromore (Tyrone), McGettigan insists the wins haven’t been as easy as the scoreline suggests.

“It was a tough 60 minutes last weekend. I’d say the boys were tired during the week,” added the Rossa boss.

“We haven’t done much training over the past couple of weeks because the matches are coming thick and fast.

“When we played Southern Gaels of Cavan, it was a heavy day again.

“It looked easy on the scoreboard but try telling our lads that – some of them were sleeping on the bus on the way home.”

Rossa advanced to their second Paul McGirr final in four years with a comprehensive victory over Tyrone champions Dromore GFC last Sunday. The conditions even called for a change of jerseys for the visitors as their white jerseys had become indecipherable from the navy blue of the Dromore kit.

From the throw-in, man of the match Eoghann McMenamin was on a one man mission to make sure that Rossa progressed to the final. He gave a majestic performance in midfield throughout the whole of the 60 minutes.

Rossa’s defence provided the platform for their free-scoring forwards to pick Dromore off at will. Matty McIvor was tasked with a man-marking job on Dromore’s danger man, Oran Sludden and he held the St Dympna’s captain scoreless.

The Shaw Road side dominated possession from early on and, even against a strong wind, they took an early lead with a fine goal from Dominic McEnhill and a point from centre half-back Michael McGreevy.

After a period of scrappy play, Dromore had a five minute spell of possession which enabled them hit three points which was to be their only scores of the first half.

Dromore were wasteful in possession and shot some poor wides but, just as the half-time whistle loomed, Rossa’s Tiarnan Murphy gathered the ball from the kick-out before off-loading to Dara Matthews. The Rossa attacker ran 60 yards and, with the Dromore defence closing in, riffled a bullet of a shot past the Dromore ’keeper Ross Hunter.

The Belfast side were full value for their 2-4 to 0-3 half-time lead.

Rossa emerged from the dressing rooms with their yellow kit but their performance mirrored their first-half exploits.

A well-taken goal from McEnhill stretched their lead further as the game slipped away from the home team. With their pride at stake, the Tyrone champions threw everything at Rossa.

However, they found Michael McGreevy and Jack Morris in stubborn form at the heart of the Rossa defence.

Dromore did plunder 0-3 for their endeavours but, having weathered the storm, Rossa regrouped and hit their opponents on the counter-attack.

Lorcan Fitzsimons and McEnhill set-up Matthews for his second goal of the game and Michael Close tagged on another couple of points to put the game firmly beyond the reach of Dromore.

With time running out, McEnhill completed his hat-trick to leave 16 points between the sides at the end of a tough, gruelling but sporting contest.

Speaking after the game, joint-manager Dominic McEnhill Snr was delighted with the team’s performance but still feels there is more to come from the side.

“Sunday will another great day in our club’s history and I would encourage as many Antrim and Rossa supporters to make the trip this Sunday to cheer on these young Gaels,” said McEnhill.

“I feel it would be just reward for this group of young players to finish off the season with an Ulster title and it would be another shot in the arm for Rossa and Antrim football.”

Rossa’s opponents on Sunday, Clann Eireann, defeated their namesakes from Magherafelt in last Saturday’s first semi-final by the narrowest of margins – 1-8 to 1-7.

Hugh McGettigan insists that Rossa have utmost respect for their final opponents having played them at various grades in recent years.

“We have played Clann Eireann right the way through from U11. They would be one of the big clubs in Armagh over the last number of years and we have played them in friendlies,” said McGettigan.

“We know how good they are – they are a really talented bunch.

“They have nine or 10 lads on the Armagh development squad and they beat a highly-rated Bredagh team by 12 points in the first round.”

While both the Antrim and Armagh champions will be eyeing success in West Tyrone on Sunday, McGettigan was keen to stress the importance of supporting the charity behind the tournament – the Spirit of Paul McGirr Trust.

The charity was set-up in memory of the Tyrone minor footballer who tragically lost his life in Healy Park while playing for the Red Hands in an Ulster Minor Football Championship match against Armagh in 1997.

“The tournament centres around the charity – the Spirit of Paul McGirr Trust,” added McGettigan.

“It is a great cause and they do great work out in Zambia. The gate receipts go to the charity so are a happy to support it. It puts things into perspective.

“It is great to get to the final and everything, but it is more important to be playing in the competition and supporting a great cause.”