Rossa punter left gutted after one team does him out of a £246,000 windfall 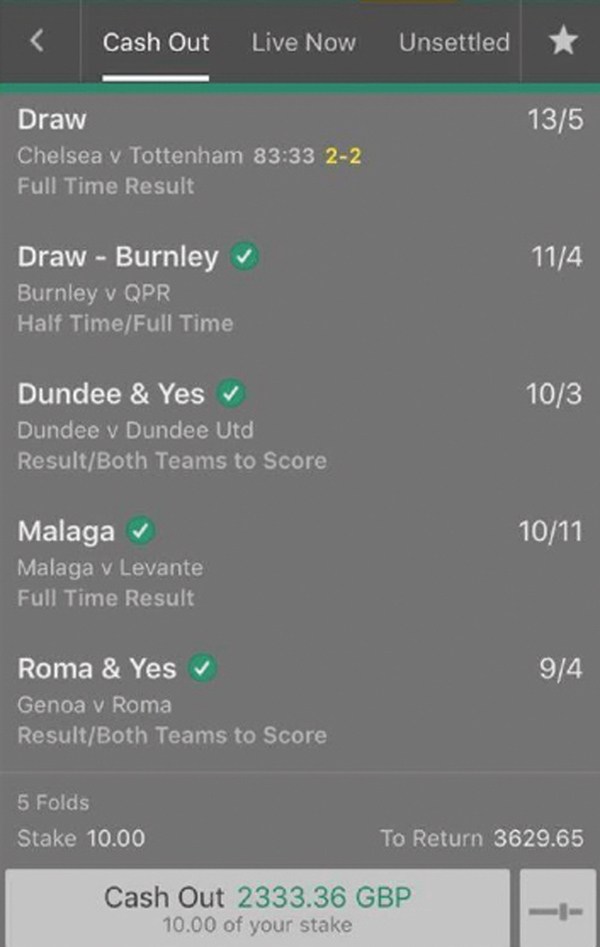 MANCHESTER United killed our quad last Sunday in our quest to end the season on a high, but it wasn’t to be as  they were held to 1-1 draw by newly crowned champions Leicester who at 5000-1 captured the title on Monday night.

Spare a thought for the poor 50p punter who cashed-out his bet 24 hours after placing it on Leicester in August for 45p - the bet would have run him £2,500.

We could have covered this page with quite a few bets this week and we start with a unlucky story with local Rossa punter, Peter McCormack who was left gobsmacked on Monday after Nancy beat him out of £246,000 after failing to beat Valenciennes.

Peter placed a £1 - yes a £1 - bet as he tried to bring the PG motto of bet small, win big to another level with result-rush 10-timer and a flurry of late goals gave him a sweat of a lifetime.

Nancy were even money to win at lowly Valciennes and after they went 1-0 down, Peter thought a comeback was on the cards but it wasn’t to be and when Dundee scored that injury-time winner at Dens Park our poor punter was a broken man (view the bet online now on the PG Twitter/Facebook pages).

It wasn’t all bad news as a local punter cashed out for £3,100 on Monday night after late goals revitalised his bet with Malaga, Roma and Dundee all scoring late on to give our punter a cracking sweat on the Chelsea v Spurs game.

He was waiting on a draw and when Chelsea equalised the cash-out value rocketed right up to £2,333.36. If it were my bet, I’d have cashed out right away but this guy’s played on until he got over three grand and then cashed-out as it hit the 89th minute.

He played it well and hopefully he will spend it wisely.

We have now reached squeaky bum time in many divisions and make sure you get league tables in front of you before picking your weekend bets.

Some teams already are on the beach while some are either playing for play-offs, automatic promotion or to win their respective leagues.

We start with the weekend quad and it’s simple - all the teams we have put up need to win. Newcastle (4/6) are fighting for their Premier League lives, but have hit form at the right time and should bank all three points at relegated Aston Villa.

Into League One and there’s a lot to work out still with one automatic promotion place still up for grabs. Burton (3/4) should grab it with a win at relegated Doncaster even though they only need a point, while their nearest challengers Walsall (3/4) should bank all three points at Port Vale to keep the pressure on.

Gillingham (11/10) have an outside chance of making the play-offs and they can win at home to Millwall who will no doubt rest some players ahead of the play-off games next week.

On to the weekend Goalrush and we have pin-pointed ‘dead rubber’ games where teams are basically playing for nothing so let’s hope that system works out for us.