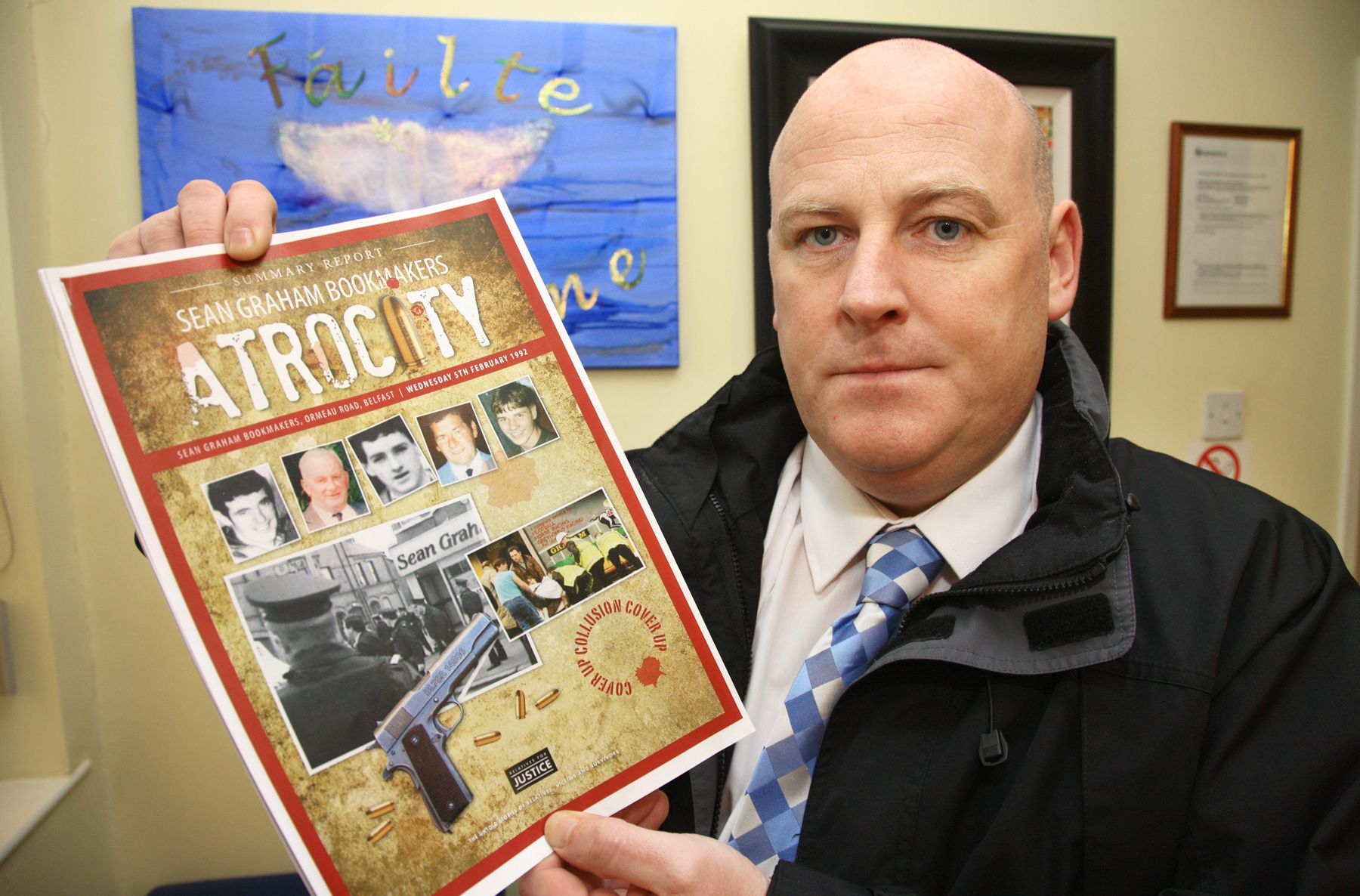 ARRESTED: Mark Sykes is the lynchpin of the campaign for justice for victims of the bookies massacre

I RARELY miss the Ormeau Road anniversary. A small, intimate event, in its shared intimacy it enriches as memory, support and friendship are reclaimed.

Those families, of all generations, step out from their terraced homes to gather for the rosary and the placing of flowers for less than 20 minutes every year.

Billy McManus comes, often in work clothes. This chatty, middle-aged man becomes the kid who was helping the injured on the day, not realising his dad was inside on the floor, dead. He has in recent years become one of the spokespersons. He speaks with the violence of the traumatised, and the caring of the harmed.

The PSNI is an institution not worthy of them. And last Friday, after seeing the PSNI assault and desecrate our grieving brothers and sisters, our young generation’s brightest and best closed the last door on any prospect of it being different.

Mark Sykes, who carries bullets in his body from the seven gunshots he received that day, joins Gerard Rice and John Gormley being busy. He looks out for his wife and children to make sure they are okay, as he carries the little microphone, or the tarpaulin if it is raining. He the lynchpin for all of the families. He is the calm head and the moral compass. He drives the campaign for truth and justice from the front. Every single piece of research and every document uncovered is a result of the hours he spends with disclosure and files.

So, on Friday, the socially distanced smaller memorial which none of us from outside could attend, was expected to be done and dusted in a few short minutes. On Facebook I kept scrolling past a scene of police and civilians arguing, thinking these were old videos from years gone by when the Ormeau Road was treated with contempt and law and order were tools of oppression. And then I realised. An armed, uniformed character, wearing a Covid mask was speaking into his radio “I am arresting Mark Sykes, it is Sykes I am arresting.”

From that moment I realised that the multiple warnings have come to pass. Our attempts to build a peaceful better police service have been crashed on the rocks of the reputation of the RUC.

Policing was meant to be new, but the RUC have destroyed that vision. Repeatedly over the course of the past 10 years there have been warnings of “roll back” in policing and criminal justice.

And most of all that legacy was destroying the PSNI. And now our wounded and bereaved are paying the price of cover-up.

These Ormeau Road families have endured three scandals and three apologies from PSNI Chief Constables. What they have not had is the truth about what the state did in murdering their families.

For the exact same reasons none of us would join the RUC.

It is an institution not worthy of them. And last Friday, after seeing the PSNI assault and desecrate our grieving brothers and sisters, our young generation’s brightest and best closed the last door on any prospect of it being different.

As long as the PSNI holds and defends the secrets of the RUC and tell the lies of the RUC the pernicious cancer that it destroying the PSNI from the inside out will go untreated. And anyone not seeing that is part of the problem.