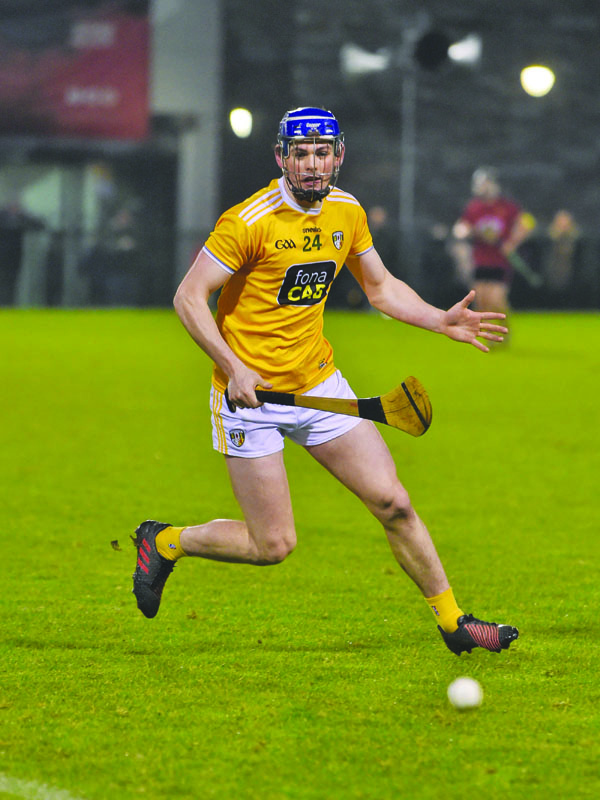 FRESH from their Conor McGurk Cup final triumph over Down on Saturday, Antrim’s hurlers will be hoping to claim a second trophy in as many weeks when they take on Offaly in the final of Leinster’s Kehoe Cup in Navan on Sunday.

The Saffrons’ win over Down at the weekend doubled up as a semi-final of this competition with both counties involved in the Ulster and Leinster pre-season competitions and it was Antrim who maintained their perfect start to the new campaign with a 12-point victory.

It has been a good start for new manager Darren Gleeson who has been able to welcome back a number of players who haven’t been involved with the county team for a number of seasons including the St John’s quintet of Ciaran and Conor Johnston, Michael Bradley and Domhnall Nugent, while Niall McKenna (Sarsfield’s) and Rossa’s Gerard Walsh have also returned with all playing their part in Saturday’s win over the Ardsmen.

The fact Antrim have been fighting on two fronts ahead of their National Hurling League 2A opener away to Wicklow on January 26 has afforded them the opportunity to run their eye over a number of players and already, competition for places looks fierce.

Ciaran Clarke and team captain Conor McCann are two regulars who didn’t feature on Saturday along with the injured Dunloy trio of Keelan Molloy, Eoin O’Neill and Conal Cunning, while James McNaughton came off the bench to set-up Alex Delargy’s second half goal.

That points to a huge battle for a place on the starting 15 and while there may be changes to the team from last weekend, the Saffrons appear to be in a good place with the extra game in the Kehoe Cup doing absolutely no harm in terms of another competitive outing to give players an opportunity to stake their claim.

“We've given a lot of people game time and it's tough to pick the team at the minute,” said selector Johnny Campbell.

“Hopefully we'll have a fit panel down the line and that means there will be headaches for us, but that's only a good thing for Antrim hurling.
“You always want to test yourself against the so-called better teams and Offaly is a team around our own level.

“We'll probably go out with a different 15 next week and see where that takes us. We'll find out a bit about them and they will find out about us as well, but we'll be looking at it as another piece of silverware to win. You can't buy that winning momentum so we'll be going there looking for the win.”

Offaly booked their place in Sunday’s final with an 8-18 to 3-18 win against Meath in the other semi-final on Saturday in Birr.

Oisin Kelly scored four goals and a point with Liam Langton scoring 2-4 as Michael Fennelly’s side showed their attacking prowess, but also some vulnerability in defence and this will be an aspect the former Kilkenny All-Ireland winning captain will look to address.

The Faithful County have been in freefall for a number of years that came to a head in 2019 with their relegation in the League to Division 2A, but worse was to follow as they suffered relegation to the Christy Ring Cup having been dumped out of the MacCarthy the previous year.

Antrim were one of the teams to inflict defeat on Offaly in hurling second tier championship when scoring a 3-23 to 4-18 win in a thriller in Tullamore.

The job for Fennelly is to steady the ship and help the Leinster outfit begin to climb back up the ladder, so a win on Sunday will offer a shot in the arm to his players who have had more bad days than good in recent times.

They will host Antrim in the league on February 16, which will naturally be a much more important game for both teams, but this weekend will allow both to perhaps lay down a marker and score a psychological advantage ahead of what is a huge season for both.

Antrim will be keen to finish their pre-season tournaments as winners of both with a 100 per cent record and maintain the winning momentum that has been established since Tipperary’s Darren Gleeson took the reins.

“It's been a good start with a new management team coming in,” added Campbell.

“That's (Conor McGurk Cup) a brilliant competition and it's worked well for us. “We've had a chance to look at a lot of players early in the year, gave a lot of boys game time and there are boys in the dressing room there who didn't get on and they're probably disappointed.

“We're still building here. The league starts on January 26, but we've found out a lot about the players gearing towards then.”