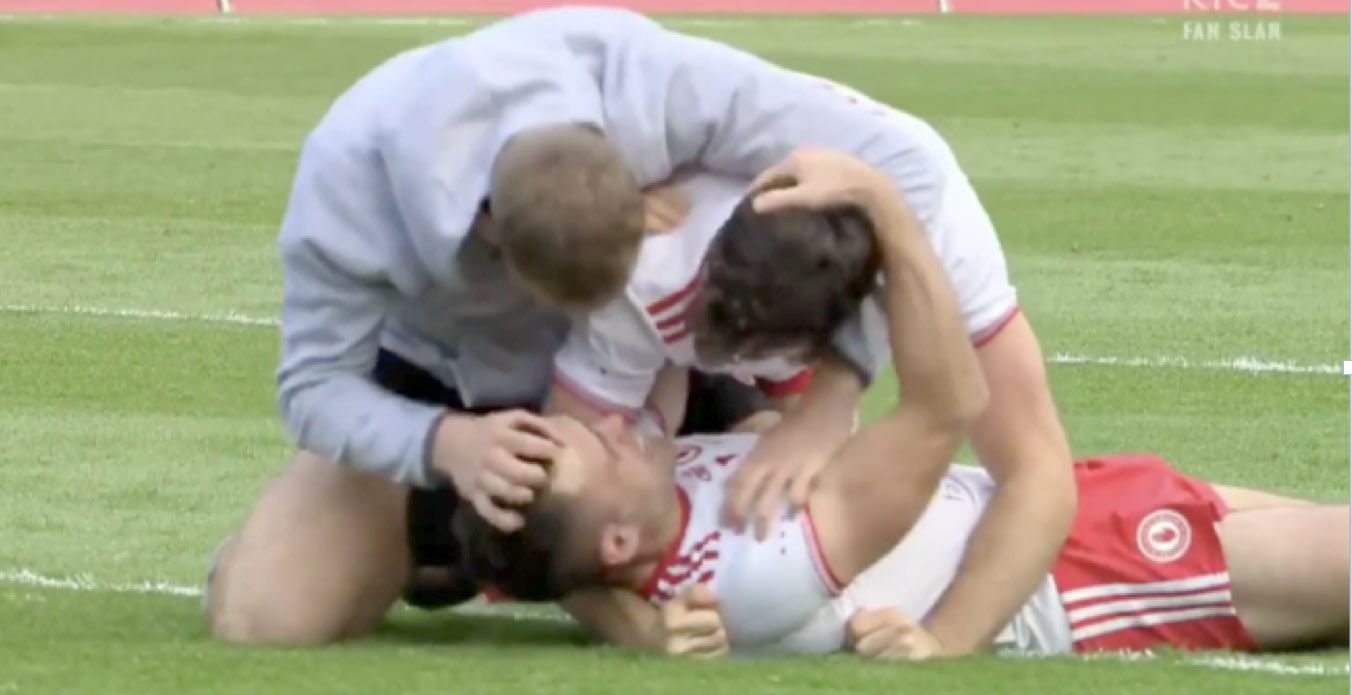 JOY UNCONFINED: Ulster celebrated along with Tyrone as the Red Hand overcame Mayo at Croker

MARTIN McGuinness had a great saying. Well, he had lots of great sayings. This one has to do with hindsight. “Hindsight,” Martin would say, “is a great man to have at a meeting.”

I thought of this as I was watching the All Ireland Football Final as Tyrone swept Mayo to one side to bring Sam Maguire back to the Lamh Dearg county. In the run into the game I thought there was little to choose between the teams. I might not have made Mayo favourites, although like most Gaels I would not begrudge them a win given that they have been nearly there so often. But now with the benefit of hindsight it is clear to me that Tyrone should have been the favourites.

They are, after all, the Ulster Champions. I am not being parochial here. Being the provincial champions in any of our provinces is no mean feat and a great achievement for the teams involved, but coming out of Ulster is a much tougher challenge than coming out of Connaught. So Mayo’s woes have little to do with a curse. It has all to do with meeting a team which was tried and tested in the playing fields of Ulster and well prepared to create and take every chance which came their way in Croke Park.

I have a great grá for Mayo. I have many friends there and in the USA where Mayo people are the backbone of Irish America. I have hiked, walked, camped, listened to music and made politics in Mayo for many years. And I have supported their footballers, especially when Ulster teams were uninvolved.

So too with Tyrone. It also is one of our historic, unbroken, proud Irish counties. It too has kept the faith and I have many friends there also and in the USA where Tyrone exiles have played and continue to play a historic leadership role in the cause of Ireland. So I am delighted that they succeeded.

Mayo will be back. Both teams are to be commended for giving us such a supremely entertaining sporting spectacle. It is amazing. Just like the GAA.  It is a spectacular national and international phenomenon. I attended my first All Ireland in 1960 when the footballers of County Down brought Sam across the border after beating Kerry. I was eleven. My Uncle Paddy brought me.  With the benefit of hindsight it is obvious that that win didn’t just happen. It was organised.

So too with last Saturday’s Final. Fergal Logan, Brian Dooher and their backroom teams built on Mickey Harte’s work and organised their players into a cohesive band of Gaelic brothers, athletic footballing wizards. Winners.  And they have these  in plenty including super subs. They may not have the national profile of other Gaelic giants, footballers, hurlers, camógs,  but have no doubt, these young Tyrone Gaels are as worthy of  national recognition as the greats of Dublin, Cork, Limerick, Kilkenny and Kerry.

Every county loves to win an All Ireland but there is a special feeling for those of us who live in the disputed counties of the North. Wrenched out of a 32-county state. Partitioned against our will from our neighbours in other counties. But the GAA has never been partitioned. Sam Maguire coming home to Tyrone or other Northern counties is a vindication of that and proof, if proof is needed, that we northern Gaels are an essential and welcome part of the Gaeldom. Without us the Gaeldom would be incomplete. Diminished. False. That is the greatness also of Tyrone’s win.

Have no doubt that there are young boys and girls on playing fields across Ireland, including the playing fields of Antrim, with the potential to achieve that greatness also. They are out on pitches across Belfast city and up and across the county from Ballycastle to Glenavy. They are out every evening and  weekend mornings learning their skills and developing their team work.  Some are natural sports people. You can spot them. Even at the age of seven.

Our County Board is doing well in their efforts to provide this. As are all our local clubs. But they need all of us to get behind them.  So support your local  club. Be part of the Gaeldom. Play your part.

Tyrone deserve to be All Ireland winners. Well done, Tyrone Gaels. Thank you for bringing Sam home to Ulster – and Tyrone.

• Antrim Camogs won the Intermediate Final. They out-played, out-ran, out-blocked and out-pucked Kilkenny’s finest. Well done to all the players – the full panel – and the management and backroom team. It was an exciting game. The Antrim women were tenacious and determined. Lovely hurling. Na mná abú. Go raibh míle maith agaibh.

• The failure of the BBC to give proper coverage to the All Ireland Finals is a disgrace. Barely a mention on news programmes and no dedicated sports coverage that I can see. It is not good enough. Public service broadcasting needs to provide fair play for Gaels.


ACCORDING to media reports there was great elation among Palestinians when the news broke that six political prisoners had succeeded in tunnelling their way to freedom from the high security Gilboa prison in northern Israel.  The six were Zakaria Zubeidi; brothers Muhammad and Mahmoud al-Arida; Eham Kamamji,;Yacoub Kadiri; and Munadil Nafayat. Photographs after the escape show a hole in the floor of their communal shower cubicle and an exit hole outside the wall of the prison in full view of an observation tower.

Palestinian people demonstrated in solidarity with the escapees and with Palestinian prisoners. Currently, there are approximately 4,750 Palestinians being held in dozens of prison facilities across Israel. These include 42 females, 200 children, and 550 administrative detainees (internees).


Al Jazeera quoted one activist, Muhammad Khabeisa, who had land stolen by an Israeli.  He said: “The prisoners in Palestinian jails are longing for freedom. They want to live their lives. They are not ordinary criminals, but patriots fighting for freedom…  The Israelis have put Palestinians in prison with the occupation of their land. When the Palestinians take up arms, the world calls us terrorists and when we lay down our arms and resist peacefully, the Israelis kill us.”

Evidence of this can be found in the statistics of deaths of children in the first nine months of this year. Twelve children have been killed in the Israeli-occupied West Bank and another 67 were killed in Gaza in May.

Every political prisoner dreams of escaping. Most never do. But with luck and careful planning there are occasional successes and these provide a morale boost for prisoners, their families and supporters. The fact that most escape attempts fail or that escaped prisoners are often recaptured doesn’t detract from the sense of confidence and self-esteem that the attempt can generate.

That is why the Palestinian escape was applauded by so many in Ireland.

THE Moore Street Preservation Trust is appealing for your help to protect and preserve “the most important historic site in modern Irish history.” (National Museum of Ireland.)
Regular readers will know that Moore Street is where the last meeting of the leaders of the 1916 Rising took place. The 1916 Rising heritage of the area is under threat from a proposed development by London-based developer Hammerson.

The Moore Street Preservation Trust is led by relatives of the signatories of the 1916 Proclamation of the Irish Republic. It has developed an alternative masterplan from a team of leading architects, planners and consultants. Key elements of it have already been published and it has secured widespread praise and support. However to complete it the Moore Street Preservation Trust last week made an urgent appeal for financial support.

I have made my donation. I would urge all of those who believe that it is important that we preserve and protect the Moore Street site and its links to 1916 to join me. It’s very simple. Any size of a donation will be gratefully accepted. So if you want to save the last meeting place of the leaders of the 1916 Rising all you need is your debit or credit card: https://pay-payzone.easypaymentsplus.com/fund.../campaign/26