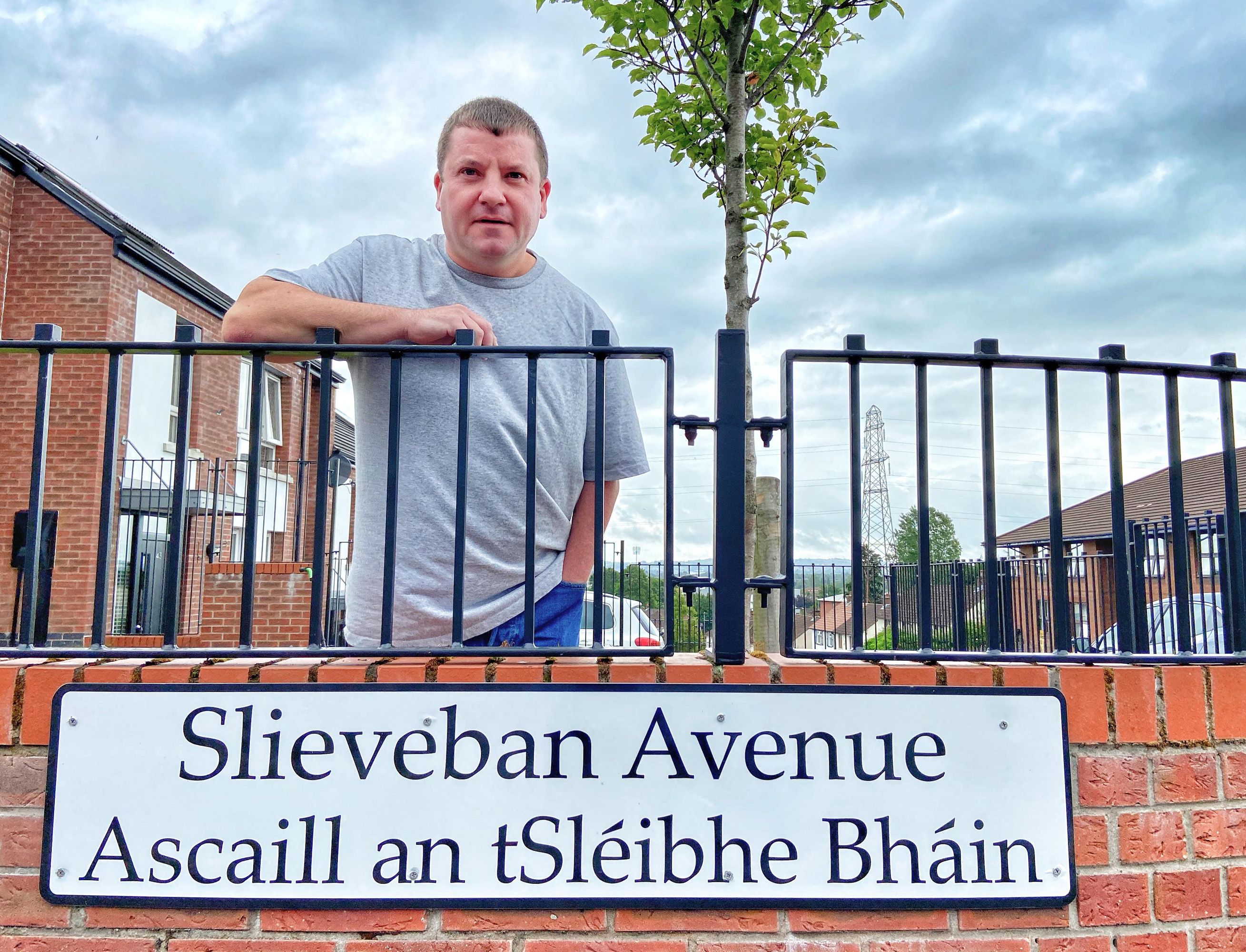 SF CLLR CIARÁN BEATTIE: In 1985 the Anglo-Irish Agreement promised an end to the ban on Irish street names. 35 years later, the strict regulations governing a name change make it almost impossible to have Irish street signs erected in Belfast.

Efforts to relax Belfast City Council’s dual language street sign policy have stalled amidst a row between Sinn Féin and the Alliance Party.
Both parties had proposals for the erection of bilingual signage rejected at the August 21 meeting of the Strategic Policy and Resources committee.
A Sinn Féin proposal to allow all streets in the city to have bilingual signs, with each street having the opportunity to opt out, was voted down by the DUP, Alliance and Greens.
Councillor Ciarán Beattie said Sinn Féin and Conradh na Gaeilge had “issues” with the legal position given by the city solicitor, John Walsh.
A report from Mr Walsh recommended a minimum response threshold in respect of the survey requirement, to be worked out by councillors. The report states that any decision to erect dual language street signs without the minimum threshold would be “legally vulnerable to challenge.
During Friday’s meeting, Cllr Beattie put forward an amended motion which he said would deal with legal advice and be “fair to all citizens.”

Unfortunately, no-one else backed our compromise proposals today which would have resulted in one of the most progressive dual signage policies in NI.

DUP said no to any change and SF want all streets to have bilingual signage unless people actively vote against it. pic.twitter.com/nGaTiAkDTw

It proposed that “Belfast City Council will install bilingual signage in all of its streets, subject to the occupants in each street (who are on the electoral register) being contacted by means of a letter survey, and if the threshold of 33 percent is returned, and 50 percent plus one are in opposition to the plans, then the signage will not be installed.”
He said it would “allow people to opt out” and “covers it in a very legal and sound way.”
Alliance Councillor Michael Long said the Sinn Féin proposal “had no trigger mechanism at all”. He presented a proposal that allows for the process to begin after 10 per cent of residents signed a petition.
The Alliance motion further proposed that at least 50 per cent of the people plus one in the street must be in favour of erecting a bilingual street sign.
Cllr Long said this was “a substantial reduction” from current policy and would “make Belfast much more progressive than the majority of councils in Northern Ireland.”
He also called for a consultation process looking at policy for dual street signs.
“I want to see more visibility of the Irish language but I want to bring along as many people as possible on this,” he added.
The Alliance proposal was voted down by all other parties on the committee.
Current council policy requires 33 per cent of the eligible electorate in a Belfast street to sign a petition to begin the process.
A letter is then sent to everyone in that street on the electoral register asking for consent to bilingual signage.
The policy requires a two-thirds majority for a bilingual street sign to be erected, whereas non-returned letters and a ‘Don’t Care’ response are considered as votes against the proposal.
The DUP’s Brian Kingston said that the “current policy is measured, and it works”.
“We see particularly in the People and Communities committee, that virtually every month there are requests that come in, and are approved,” he added.
‘For those who portray this as some sort of denial, the system is there, and it is an optional extra that residents can request.”
Addressing Cllr Long, Cllr Beattie said: “I don’t know how you see this as a compromise. What you have done is get an agreement with the DUP on how you would move this forward. This is an equality issue. The DUP have a position on that, we respect it, and that’s OK.
‘But the DUP also have a position on gay marriage. Had you sat and done a deal last year with the DUP on gay marriage we wouldn’t have had marriage rights this year. This is exactly the same – these are rights being denied to Irish speakers in this city.”
Cllr Long responded: “Apparently I am agreeing with the DUP who have just voted to say they don’t support any change. That would tend to suggest my proposal is a compromise, because it is between the two positions, one of Sinn Féin, and one of the DUP. I would have thought that was the essence of compromise.”