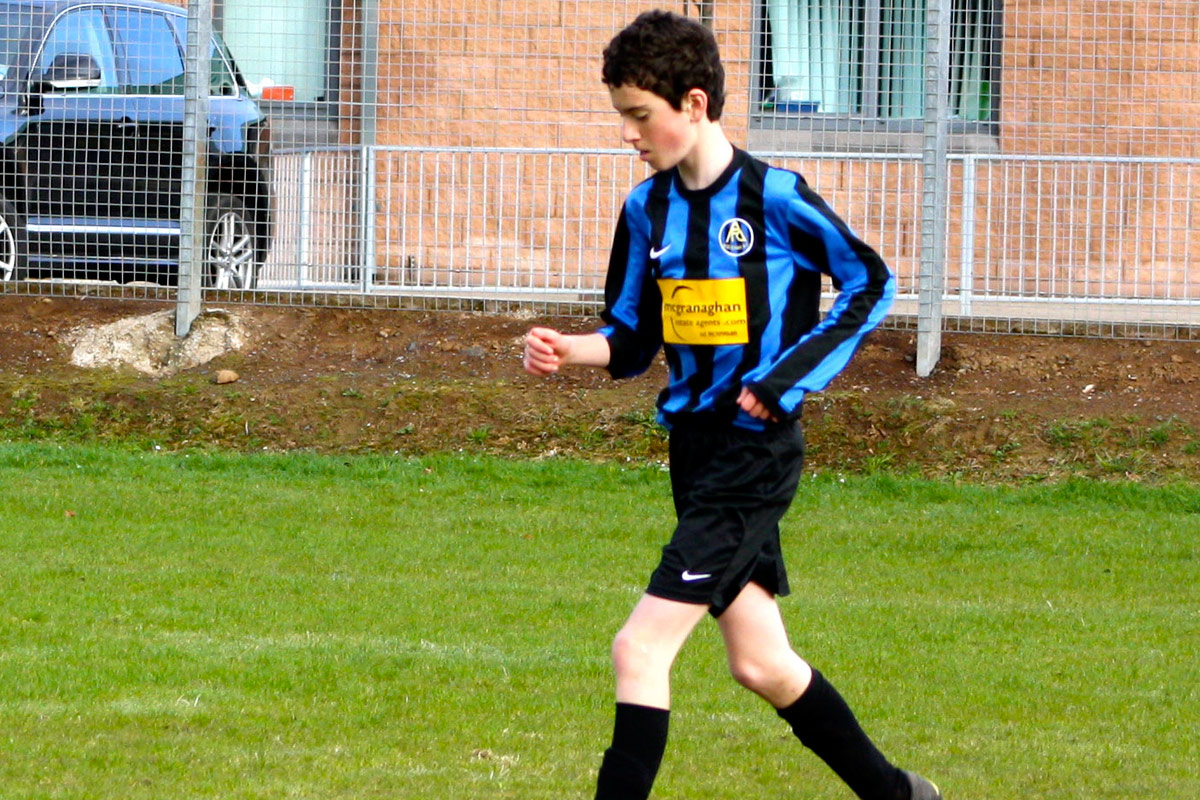 The scoreline which has been on everyone’s lips recently, following events in Manchester last Sunday, was replicated at Black’s Road six days later in a surprisingly one-sided encounter between two teams locked together on points before kick off.

After last week’s tremendous derby victory over Rosario, the Blue ’n’ Blacks approached this one brimming with confidence and nobody was as imperious as winger Paddy O’Boyle who started the game like the proverbial man possessed. By the tenth minute he had helped himself to a brace of lovely goals in a superb opening spell for Aquinas.

The first owed much to the vision and artistry of Dan Rainey, whose inch perfect 50-yard pass was flicked on by Tom Maguire for O’Boyle to dink over the keeper in style.

The second was an opportunist finish after a blistering Matt Hughes drive was parried into his path.

The goals garnished what was a delightful opening half hour from Aquinas who worked neat triangles all over the pitch in an exhibition of football, which Shankill simply had no answer to.

The Aquinas full-backs, Peter Morgan and Thomas Cafolla, saw a lot of the ball in the attacking third, with Morgan particularly outstanding on the right with some silky passing and clever movement.

With such rhythm and flow to their game, further goals seemed inevitable as the half wore on, and so it proved.

Tom Maguire’s reputation as a goal machine is fully merited and a quick fire double, to rival O’Boyle’s, around the half hour proved the point.

The first was a beautiful chip from an O’Boyle assist, closely followed by an assured volley from a trademark Matt Carson corner.

Just on the half-time whistle the only Aquinas defensive lapse of the day led to a Shankill penalty, with keeper Kevin McGovern given no chance, spoiling an otherwise fine match for the immaculate Aquinas stopper.

The second half understandably lacked the zest and drama of the first but it did provide Caolan Lynch and Niall McCourt with the chance to once again demonstrate their value to the team at centre back as they shored things up at one end, allowing Aquinas to continue to dominate at the other.

The two Conors combined for the fifth on the hour mark, Toner pouncing on a Flynn flick-on to fire home on the back of tenacious work from Joe Cunnane.

The pick of the bunch though was kept until last when Hugh O’Connor bombed forward on the right and found Hughes whose delicious cross was plum on the forehead of captain Carson who duly nodded home to round off another fine display from the young Blue ‘n’ Blacks.