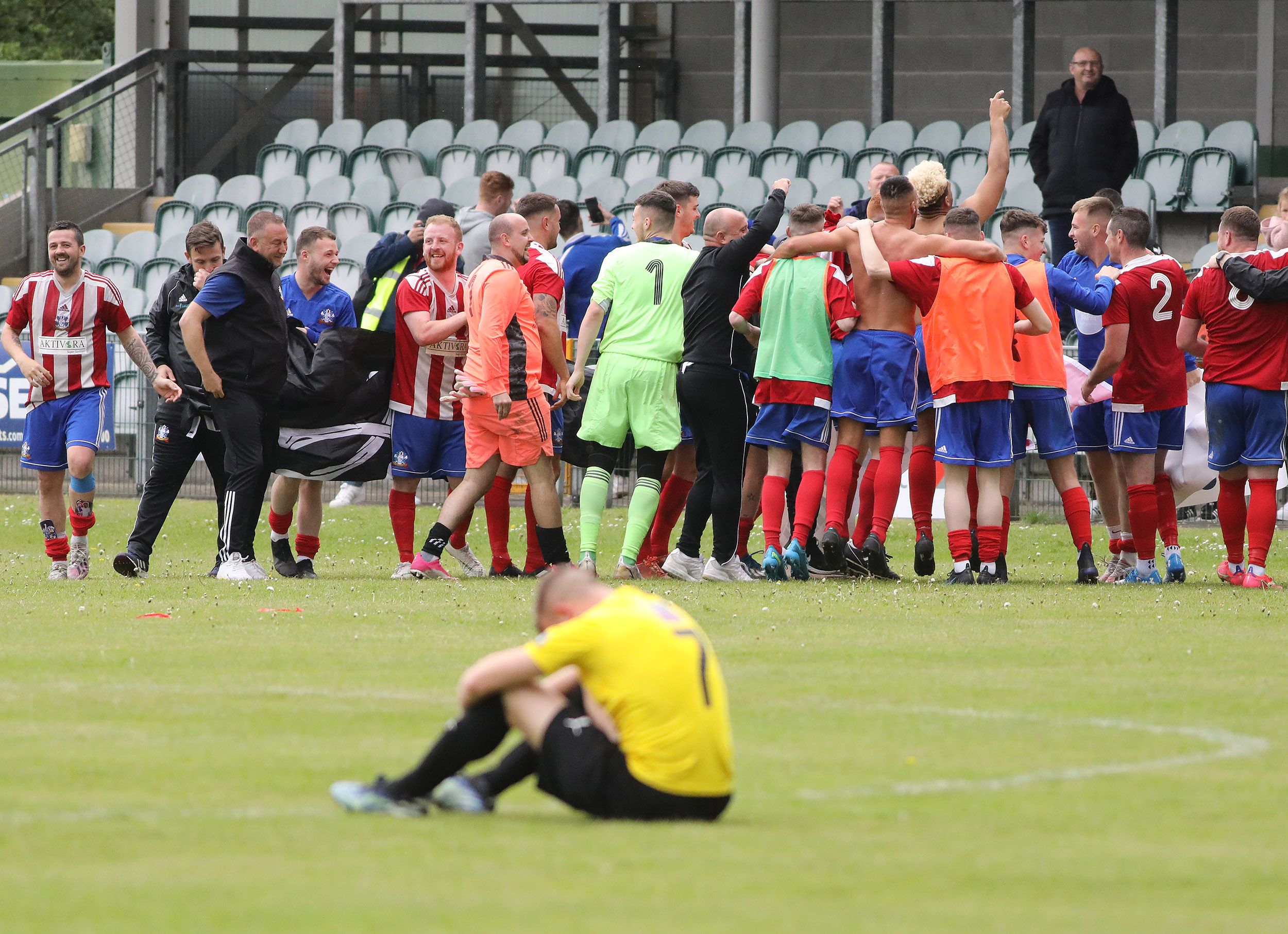 The agony and the ecstasy: A despondent Ciaran Hyland can't hide his emotions as Ballymacash Rangers' players celebrate their playoff win Jim Corr

Shouts of ‘we’re going up!’ thronged Donegal Celtic Park today as Ballymacash Rangers drew 2-2 against St James Swifts, meaning the Lisburn side will get promoted after securing a 3-0 victory over Swifts in the first leg, meaning the final score was 5-2 on aggregate in the NIFL Premier Intermediate promotion playoffs.

West Belfast’s Swifts were far better quality than in the previous leg when manager Barry Johnson said the team would have to work hard to get ahead of Ballymacash’s aggregate lead. Today’s game saw the West Belfast men make several chances for themselves work, and the side dominated on possession, and kept constant pressure on ‘The Cash’.

The game got off to a good start, with big crowds from both teams cheering on their side to get ahead.

Swifts took up the tempo first when at 11 minutes Francis Nolan went for goal, but it was saved by the Cash’s ‘keeper Ryan Walsh. Walsh came away badly from the save however and lay on the ground for a few minutes with an apparent injury before resuming play.

The West Belfast men again went for the goal two minutes later when John Savage shot at the goal, but the attempt was lacking power and easily swept up by Ryan Walsh.

The Cash hit back over the next couple of minutes with Chris Ferguson attempting to blast the ball with serious power towards the Swifts’ ‘keeper Conan Russell, but his chance was thwarted by Swifts defender Aaron Martin, who deflected the shot with his body. At 14 minutes, keeping on the attack, Chris Ferguson crossed the ball to Michael Moore who took the chance at goal, but the shot went narrowly wide.

It was here that Swifts really began to dominate the half, maintaining possession and probing the Lisburn side’s defence for any sign of weakness. Ciaran Hyland and John Savage both kept Lisburn’s defence on high alert, with help from Joshua Diver and Aaron Martin who routinely got the ball to their forward men to press their attacks.

John Savage was awarded a yellow card at 27 minutes for a foul on Ballymacash, but it didn’t seem to slow down their attacks, with Aaron Martin taking an impressive run and trying a shot himself, but the shot wasn’t powerful enough to trouble ‘keeper Ryan Walsh.

Just after half an hour in Swifts got their first goal of the game, when Ciaran Hyland demonstrated great skill and dodged the keeper, allowing him to calmly chip the ball into the back of the net to the thunderous applause of the home crowd.

At 35 minutes The Cash made their first substitute when ‘keeper Ryan Walsh, who still looked to be injured from earlier on was replaced by another goalkeeper, Rhys Lawson who stayed for the remainder.

The end of the first half remained heated with Ballymacash trying three times at goal, once with a chip from Mark Drysdale who found no teammates there to answer, and at 41 minutes when Chris Ferguson attempted a good free kick from about 30 yards out, which would have went in if it was just a bit lower. Ballymacash man Dylan Davidson also managed to take Swifts’ defence by surprise when he made a play up the left wing to deliver a great shot, but it went narrowly wide.

At the close of the half Swifts tried again for glory when captain Sean Pat Donnelly delivered a lovely long cross to John Savage who went for the header, but Rhys Lawson was waiting for him and saved.

The second half got off with Swifts again putting the pressure on, when Ciaran Hyland took another chance at goal, with it going just over the bars.

Ballymacash attempted a good run when Michael Moore took a good chance at the goal, but he was ruled offside. However, Swifts continued their momentum and at 54 minutes Ciaran Hyland went for another header but it went narrowly to the right of the net.

At 54 minutes Ballymacash made another substitution, with Dylan Davidson coming off and Guillaume Keke coming on. Swifts themselves then made a substitution of their own, with Mark McDonald coming off for Daniel Wilson.

At the hour mark The Cash put dents in the hopes of the West Belfast men when Michael Moore scored a header from a corner, equalising the score at 1-1.

Swifts fought back a moment later when Michael Feerick outwitted Cash’s defence and took a shot, but it wasn’t enough and was saved by Rhys Lawson.

Three minutes after their first goal The Cash scored again with a goal from Justin Armstrong, which flattened the hopes of the West Belfast men as the Ballymacash supporters began cheering ‘We’re Going Up!’

The energy from Swifts which had dominated the game until then began to sag noticeably, but not for long, and Swifts made another substitution at 71 minutes with Francis Nolan coming off and Joseph McCall coming on.

Play resumed to an even tempo for the next 10 minutes, but Swifts managed to get something of their fighting spirit back when at 81 minutes John Savage equalised the scores from a cross, putting the score up to 2-2.

However, there was little hope now of Swifts going up, but they still fought on until the closing minute, with the closing minutes trying to put pressure on the Lisburn men, which led to Michael Moore being given a yellow card for a foul.

The game ended 92 minutes in after Guillaume Keke attempted a header crossed in from the corner, but it went wide, and the referee called time, bringing the total score on aggregate up to 5-2 and ensuring that Ballymacash Rangers will be promoted to the NIFL Premier Intermediate League. 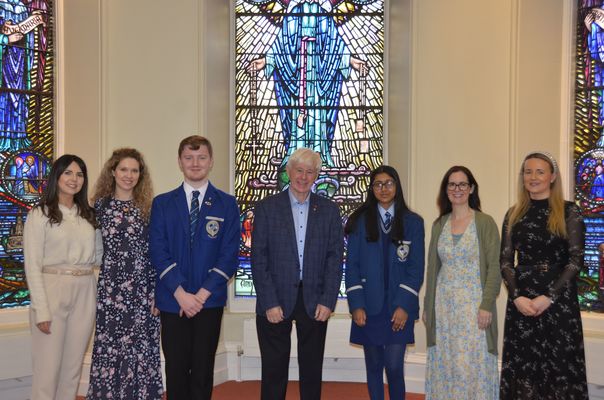 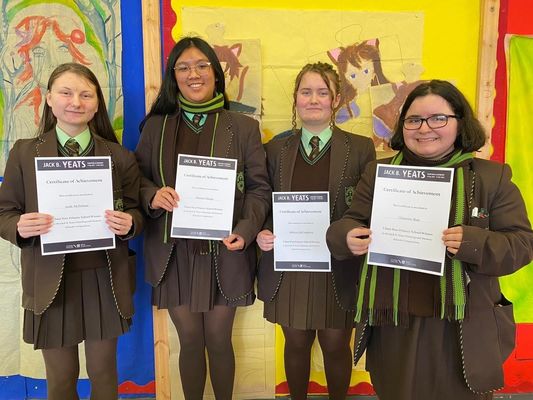 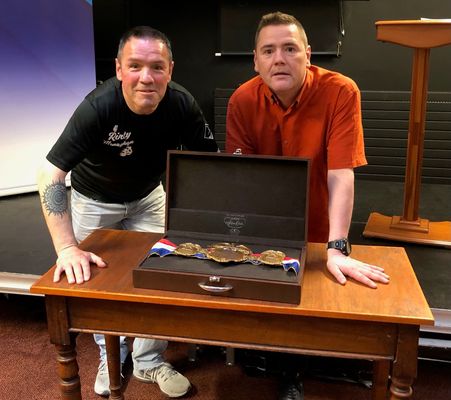