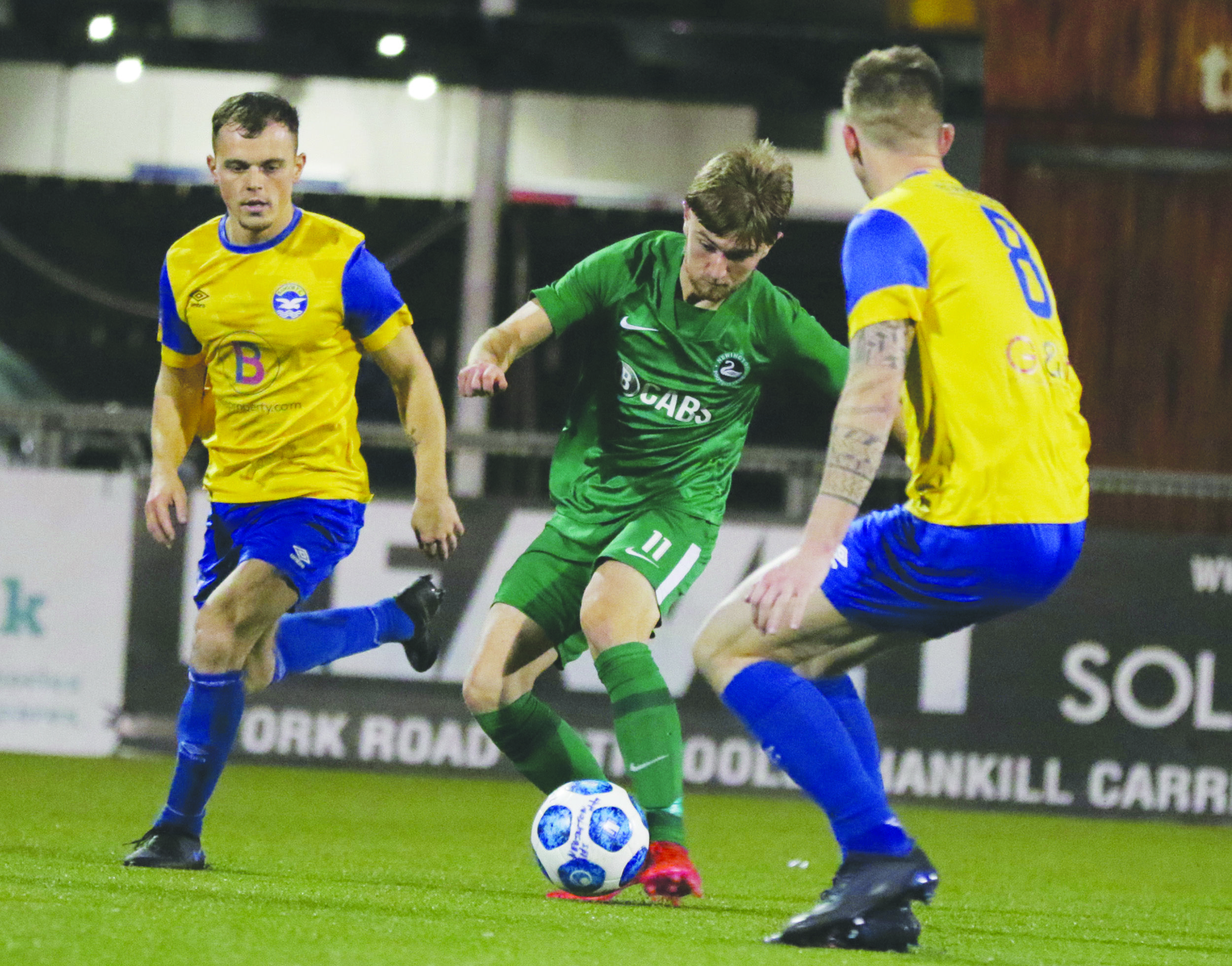 Newington's Aodhán Gillen, pictured in action against Bangor on Tuesday night, bagged a late brace in the 2-0 win over Richhill in Saturday's Intermediate Cup second round tie at the Richhill Recreational Centre

NEWINGTON progressed to the third round of the Intermediate Cup as two late goals from substitute Aodhán Gillen gave them a 2-0 win over a battling Richhill side on Saturday afternoon.

It was a workmanlike performance from Newington, who were perhaps feeling the exertions from Tuesday night’s extra-time win over Bangor in the Steel and Sons Cup semi-final at Seaview.

Gillen also scored the opening goal in the remarkable 5-3 win over the Seasiders.

Manager Paul Hamilton made a wrath of changes with only Jack Reilly, Mark Gorman, Aodhfionn Casey, Conal Burns and Patrick Downey retaining their place in the starting 11.

Richhill play in the Mid-Ulster Intermediate ‘A’ league, but they demonstrated right from the off that they wouldn’t be overawed by the occasion.

Indeed, they fired an early warning shot to Newington when midfielder James Nesbit struck a well-hit volley off the post after just two minutes.

The visitors struggled to impose themselves in the early stages of the game and Richhill ought to have found the net on 22 minutes.

A fantastic cross from Joshua McCarten was headed towards goal by Nesbitt, but Newington goalkeeper Nathan Kerr made a stunning save at full stretch.

That seemed to provide the wake-up call Newington needed and they began to find their feet.

When Daniel White was bundled over on the edge of the box, referee Paul Kelsey allowed play to continue and the ball fell kindly for Daire Rooney who unleashed a low drive from the right-hand side of the box.

Richhill ’keeper Aaron White was beaten, but the ball hit the far post and the hosts survived.

Moments later, however, Newington were awarded a penalty for handball against Cameron Faulkner.

The defender was a tad unfortunate as it was more ball to hand, but Kelsey pointed to the spot.Patrick Pierce stepped up to take the penalty, but blasted his effort well wide of the left-hand post.

At the other end, Kerr was again called into action to prevent Aaron Black scoring while Newington had a goal ruled out on the stroke of half-time when Conal Burns was adjudged to have been offside when tapping in from an excellent delivery by Gorman.

Newington were more direct in the second half and restricted Richhill to shots from distance, but the hosts still managed to hold out for 80 minutes.

The North Belfast side had claims for a second penalty waved away by the referee 55 minutes after White was pulled back in the box before centre-back Reilly tested Wright from distance shortly after the hour-mark.

Richhill’s best chance of the second half came on 69 minutes when David Ross played a dangerous ball across the face of goal. With Black lurking at the back post, Gorman made a timely clearance.

With Gillen introduced after Rooney fell heavily midway through the second half, Newington also introduced Robbie McVarnock and Sean O’Reilly for the final 20 minutes.

The fresh legs gave Newington fresh impetus and they’d the hosts penned in for much of the final quarter.

The opening goal when it came was a moment of genuine quality from Gillen as he left two Richhill defenders trialling in his wake before unleashing a great shot which gave Wright no chance as the visitors broke the deadlock on 80 minutes.

The goal was made possible following an excellent defensive tackle from the impressive Casey and Newington put the game beyond doubt with their second goal in the final minute of normal time.

This time Jack Reilly was the provider and Gillen turned the ball home from close range to make it 2-0.

Richhill should have claimed a consolation goal in stoppage time, but McCarten dragged his shot wide of the target with only Kerr to beat.

Newington now progress to the third round of the Intermediate Cup as their fine run in cup competitions this season continues.