Soccer: St James’ Swifts have it all to do in second leg against ‘The Cash’ 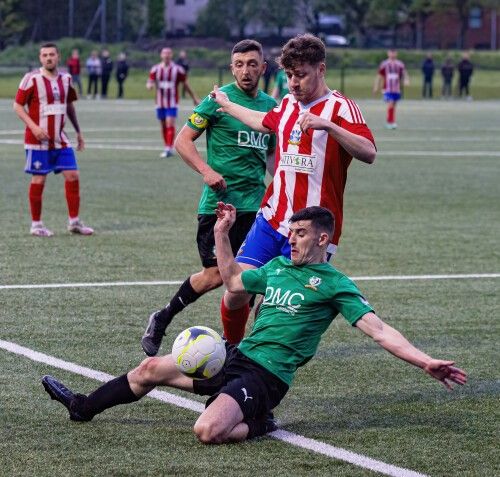 ST JAMES’ SWIFTS have it all to do in Saturday’s second leg of the NIFL Premier Intermediate promotion playoff at Donegal Celtic Park (2pm kick-off) as Ballymacash Rangers hold a 3-0 advantage from Tuesday’s first leg.

The Lisburn side were full value for that victory and the manner of defeat will leave the West Belfast side knowing they have a mountain to climb if they are to turn this playoff around.

On Tuesday, they couldn’t live with the pace and intensity of ‘The Cash’ with Justin Armstrong netting a brace in a man-of-the-match performance, and Swifts’ manager Barry Johnston had no complaints after the game.

“They were just better all over the park,” he admitted.

“It was just one of those things, a big game and they handled the occasion better. I’ve been there before where I’ve let myself down in big games, but it’s important we get the heads back together, try to score early and put them under pressure but they are firm favourites. That’s a tough one to take.”

A massive game in store for the Swift’s as we look to overturn a 3-0 deficit.

A home tie can see us get a massive support behind the team so let’s get up and get behind the lads.

Info for both sets of fans: pic.twitter.com/VusknnWOjN

Johnston admitted he may have got his selection wrong on Tuesday and was quick to take the blame, yet despite his team faring better in the second period, accepts they still didn’t look to be on to at any stage.

He has challenged his players to bounce back and give a better account of themselves on Saturday, but accepts it is a long way back if they are to turn the tables and get a result that would see them promoted into the NIFL.

“I hold my hands up and I’ve spoken to the players,” he continued.

“Maybe I was a bit too loyal to some, but that’s on me and I’ll never blame the players.

“Certainly, we gave a better account of ourselves in the second half and created a few chances, but none of them were clear cut.

“If we’re at home with a big crowd behind us and we score early, it put a wee bit of pressure on them, but you can see what Lee’s (Forsythe - Rangers’ manager) done there so credit to him - they were good.

“I’ll be expecting a reaction from our boys on Saturday because they can’t be any worse than they were tonight.”