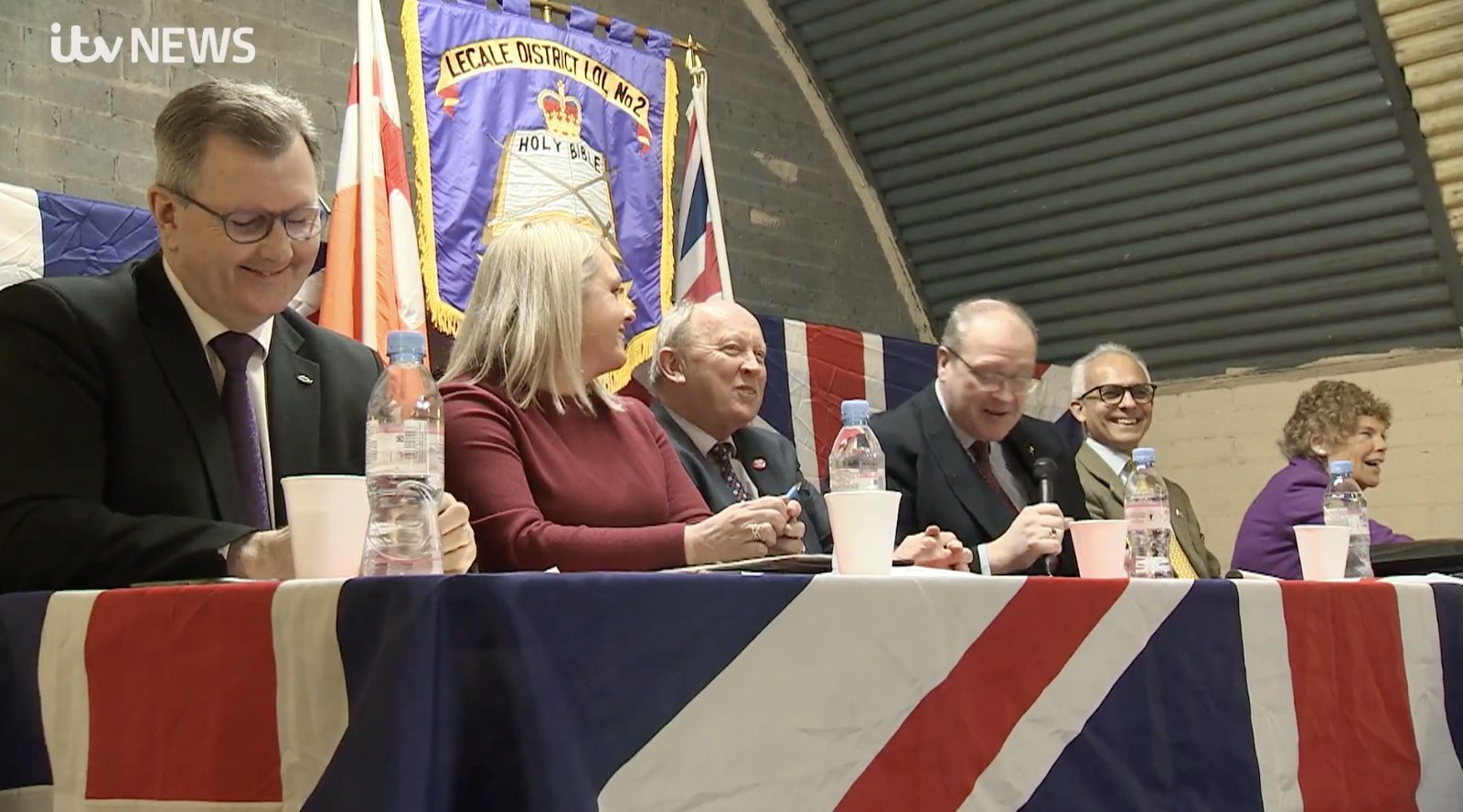 ALL SMILES: Jeffrey Donaldson at an anti-Protocol meeting in Crossgar

JEFFREY Donaldson’s had a bad few days. What’s that you say? He’s had a bad year? Harsh, very harsh.

True, he hasn’t exactly been pulling up trees since he emerged triumphant but with smoking hair and blackened face from the skip fire that was last year’s DUP leadership contests.

And he’s led the DUP up a political cul-de-sac from which the only escape is via an exit marked ‘Protocol Climbdown’. But the latter end of last week was a particularly trying one for the Laird of Lagan Valley.

The arrival of Rishi Sunak in Downing Street has greatly discomfited loyal Ulster. The former Chancellor has identified “economic stability” as his overriding priority and the already paper-thin possibility of the UK entering into a trade war with the EU – the world’s largest trading bloc – over the Protocol has vanished in a puff of bonfire smoke.

The recent apology to the Irish Government – ‘sell-oot’ in Ulster-Scots – by Brexit hard man (now NIO Minister) Steve Baker had already sent the DUP to DefCon 5. And so unionists have been ramping up their criticisms of the Protocol in an effort to win back waning sympathy and on Radio Ulster’s Good Morning Ulster Jeffrey laid out a Protocol injustice so upsetting, so unacceptable and so inhumane that justice cried out to be done.

“The truth is,” he said, his little windpipe quivering with raw emotion, “that the Protocol is harming our ability to access medicines and equipment. That meant that for three weeks in a cardiac unit in one of our large acute hospitals in Belfast people who were waiting on life-changing heart surgery had to wait three weeks because the equipment had to be sourced from another country because we couldn’t get it from our own country because of the Protocol.

Now these problems are real and they need to be dealt with.” And across the land a collective gasp of shock and horror was heard and people stopped eating their Weetabix or brushing their teeth to ponder the foul and grave wrong that was being perpetrated on the sick and the needy by the iniquitous Protocol©.

It wasn’t long, however, before the DUP leader’s claim was being challenged. “There is no substance to Sir Jeffrey’s claim. There have been no delays.

The Trust has not had to outsource supplies of equipment and business is running normally.” But what union-despising miscreant was throwing about such a claim. Who was daring to suggest that Jeffrey’s heartbreaking tale of pain and suffering might be anything other than right on the money? Michelle O’Neill? The GAA? Naomi Long? Conradh na Gaeilge? Colum Eastwood? Féile an Phobail? Colin Harvey? The Wolfe Tones?

Actually, the quote defusing Jeffrey’s Protocol bombshell came from the Belfast Trust, the body responsible for sourcing the very medical equipment about which Jeffrey raged so passionately.

So, heart patients weren’t left mid-operation with their ribcages wide open waiting on a widget from Wolverhampton. Myocardial infarction victims weren’t left breathless and blue because Brussels held up their stents from Stourbridge.

Everything was fine – ticking over quite nicely, you might even say. But he’s a trooper is our Jeff, and by the weekend he’d picked himself up and dusted himself off for an interview on Sunday in which he remarked: “We never backed the Protocol. We made clear it would harm Northern Ireland, it would create instability.”

Once again, Jeff had barely had his fluffy little mike removed before he was being reminded that it’s not that long ago since he was not only comfortable with the inquitous Protocol©, but was waxing lyrical about it.

“Well in the end customs checks doesn’t mean that you change the constitutional status of a part of the United Kingdom, that’s not going to happen,” he said on Spotlight in May 2020.

“Already we’re seeing the political parties and business leaders coming together to see how we actually exploit the opportunities that may arise from this situation not only to ensure that we have full access to the UK market but we’ve also got access to the EU market.”

Now Squinter doesn’t know what Jeff thinks backing the Protocol looks like, but expressing optimism about its potential and bigging up its dual-access benefits sounds pretty much like it to Squinter. He isn’t the only one in his party to have flip-flopped from believing the Protocol to be the best thing since cable-ties for lamppost flegs.

In January 2021 First Minister Arlene Foster told Andrew Marr: “I could stand here and bemoan the fact that we have left the European Union with a Protocol, I wish that that wasn’t the case, or I can now look for opportunities as we move out of the EU. We’re out of the customs union, we’re out of the Common Agricultural Policy, the Common Fisheries Policy.

Jeffrey shouldn’t feel too bad about the flip-flop. In fact, maybe the experience will serve him well. Because when he inevitably settles for something considerably less than the dynamiting of the Protocol he’s going to be saying he never really wanted rid of it anyway. He’ll be flip-flopping on his flip-flop, for flip’s sake.

And to put the tin hat on the week, the DUP leader found himself in the middle of really rather odd spat – if indeed that’s what it was – with another diminutive unionist icon: Rumpole of the Failey, My Cousin Binny, the Donaghadee Dynamo himself –Jamie Bryson. Asked on Good Morning Ulster if he considered the Loyalist Leprechaun an adviser or a friend, Jeff said he didn’t consider him anything other than a blogger with whom he shares opposition to the Protocol.

“I think I’ve had two meetings with Jamie Bryson in the last year.” Not for the first time in that stormy few days, Jeffrey encountered a certain degree of blowback. “I think Sir Jeffrey was probably caught on the hop,”

Jamie told his co-host on the Nolan Show. “He would keep me up to date on what’s happening in Westminster and I would express views to him.” Asked how often the pair were in touch he said: “I would say on a weekly basis would be a fair analysis.”

Jeff may argue – with some justification, let it be said – that having a natter by phone or by text or on WhatsApp doesn’t qualify as a meeting, so his claim to have met loyal Ulster’s leading – and only – taxi dispatcher paralegal only twice is likely an accurate one, if only partially so.

THE Loyalist Communities Council is not a happy bunch of bunnies. The umbrella group representing the still-active narco-killers of the UDA and UVF sent a letter to the waiting world last week expressing their fury about… well… about everything, really.

In the letter, they say they’re not happy about Irish Government ministers visiting loyal Ulster and added that any effort to impose joint authority would have “dire consequences”. The letter sparked an outbreak of almost unprecedented navel-gazing from a local media not known for thoughtful reflection.

“What does this mean?” the LCC was asked. “What would ‘dire consequences’ look like?” bemused commentators wondered. “What direction are loyalist paramilitaries taking?”

Now Squinter doesn’t profess to be an expert on the inner workings of the UDA and the UVF, but when two groups who spent 40 years killing innocent Catholics speak of “dire consequences”, we can be fairly sure that they’re not talking about sending a stern letter to the papers.

It's unlikely that said dire consequences will involve sending a petition to Downing Street. And Squinter can’t in all honesty see the Turkey teeth brigadiers taking a break from pushing gear to hold a candlelight vigil outside Stormont.

Next week: What does Vladimir Putin mean by invasion, do you think?

We’re all feeling your pain, Bono

GERRY Adams says he doesn’t hate Bono, and if that’s so then he would appear to be in a social media minority, because to be perfectly honest the perpetually pleased with himself U2 frontman isn’t everybody’s cup of Barry’s.

Gerry was responding to media reports that the Sunglassed One had provoked his enmity by his ceaseless calling out of the IRA and Sinn Féin – most triumphantly at a concert in the US where he passionately berated an audience member for carrying a Sinn Féin flag that was actually a San Francisco 49ers flag.

And he said that Bono’s claim that he and his wife had been targeted by the IRA was “news to me”, which seemed a bit unfair to Squinter and lacking the kind of empathy due to a man who has suffered so much for his principles.

For not only were he and his wife targeted by the IRA, Bono says a “famous gangland leader” – had plotted to kidnap his family. And who can forget the time that fellow rock god Bon Jovi said in a podcast interview that Bono had told him that when he was a child in Dublin he had been chased through the streets of Finglas by Orangemen?

That kind of trauma calls for – nay, demands – our pity and our support, Gerry, not our scepticism. So over the years Bono’s variously been in the sights of the Orangies, the General and the Bon Jovis – sorry, the Provies.

There’s gotta be a song in that somewhere. Unfortunately.