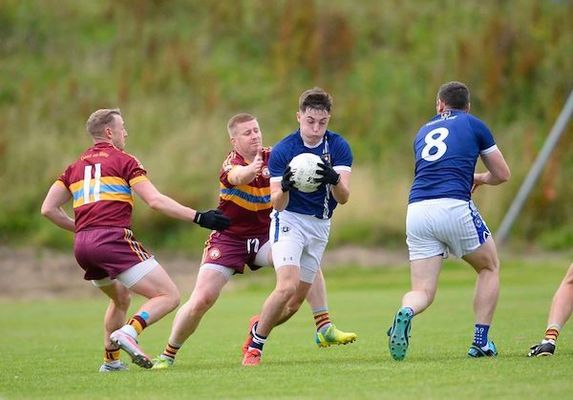 A DEVASTATING first half display from St Gall’s paved the way for a facile 10-point victory at Gort na Móna on Wednesday evening as Paddy Murray’s men got their Championship campaign off to the best possible start.

CJ McGourty was the top scorer with 0-7, including two from play and he was assisted in attack by the impressive Niall Burns with the youngster hitting 1-2. Sean Burke’s powerful showing at midfield ensured it was largely one-way traffic in the first half and the home side were forced to live off scraps.

Time and time again, Gort na Móna were turned back by a hungry and well-drilled St Gall’s rearguard.

Tougher tests will come down the road, but the former county kingpins had eight different players on the scoresheet while the Gorts bagged a late penalty from Padraig McHugh which was little more than a consolation.

Indeed, the dual star was one of the few Gort na Móna players who took the fight to St Gall’s, but the full forward was starved off possession.

In the opening half, Gort na Móna managed just two points while a ruthless St Gall’s side had the game all but wrapped up at the interval with a tally of 1-11.

Inside the first five minutes, McGourty scored two points, one from play before a great bit of quick thinking created his side’s goal.

Having scored his first from a mark, McGourty called a second one following a delightful ball from Mark Kelly. Spotting Burns inside, McGourty’s pass put the full-forward through on goal and he made no mistake to beat Thomas McCaffrey will a low shot to put St Gall’s 1-2 to no score ahead.

Aidan McDonagh opened Gort na Móna’s account after 10 minutes, but it was instantly met with a reply at the other end via the boot of Kevin Niblock.

Back-to-back McGourty frees moved St Gall’s further ahead before Burns scored his first point from play while a raiding Sean Burke finished off a solo run with a fine score.

It seemed all too easy for St Gall’s at this stage and further scores from McGourty (two) and skipper Eoghan McCabe had them out of sight at 1-10 to 0-1.

Things could have been worse for Niall Ward’s men had McGourty’s effort at goal been an inch or two lower, but the St Gall’s ace crashed his shot off the crossbar minutes before the break.

McHugh doubled his side’s tally before McGourty converted his sixth point of the half as the first half drew to a close with St Gall’s 1-11 to 0-2 ahead.

Having picked up a dead leg in the first half, Niblock was replaced by Terry O’Neill for the second half and St Gall’s didn’t have things all their own way after the break as the hosts managed to outscore their opponents.

Substitute Niall Melaney landed a good point from play minutes after the restart while Darren Boyd converted a free following a foul on McHugh.

A great score from a tight angle from wing-back John McCaffrey got St Gall’s up and running again before a hat-trick of McGourty frees had his side up by 14 midway through the second half.

Substitutes Michael Pollock and O’Neill added points after the water break to complete the scoring for the visitors.

A late 1-3 salvo proved too little, too late for Gort na Móna as Hugh converted a free before dispatching a penalty past Chris Kerr following a foul on Tiarnan Keenan.

McHugh and McDonagh tagged on points in injury-time to trim to deficit back to 10 by the full-time whistle.

St Gall’s host Naomh Éanna on Sunday knowing another win over the Glengormley side would put them in control of Group Four. On Wednesday night’s evidence, they could be hard to stop.