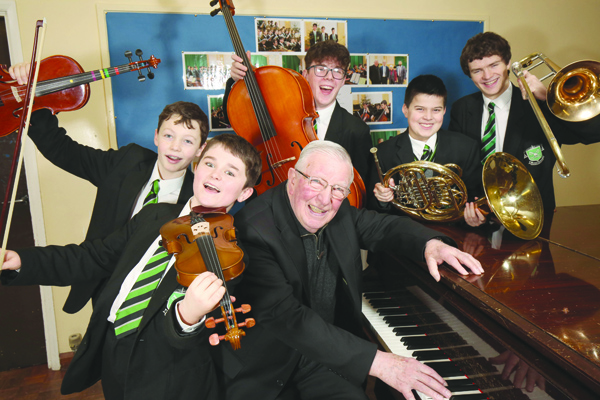 PAST pupils and teachers will return to St Malachy’s College tomorrow night (Thursday) to perform in the school’s first inaugural Alumni Recital.
The debut event aims to raise funds to purchase new instruments and equipment for the Music Department and to assist with the development of its infrastructure.
The Alumni Recital Series will be a celebration of musical achievements of pupils who have gone on to build successful music careers and will help to inspire the next generation of musicians within the College.
Current College Principal Paul McBride is a former Head of Music at the St Malachy’s and conducts Ireland’s longest-established youth orchestra, the City of Belfast Youth Orchestra.
Other famous musical ex-pupils include violinist Michael D’Arcy, conductor Kevin Mallon, musical theatre director Peter McCarthy, flautist Gary Arbuthnot and musician and composer Neil Martin. One of the most well-known performers on the night will be former Head of Music, Fr Kevin McMullan, who oversaw expansion of the Music Department.
He started the College’s first orchestra and many students under his tutelage went on to pursue national and international careers in the music industry.
Fr McMullan, who is performing in the College on the evening for the first time in over twenty years, will be joined by a host of talented ex-pupils, some of whom he taught, and some more recent alumni.
Speaking ahead of the event, Principal McBride said: “Music has played a central part in the life of St Malachy’s College for many decades and Fr Kevin McMullan played a critical part in establishing what has become a strong and vibrant tradition.
“As one of the many pupils that Fr McMullan taught and inspired, I know the passion he has for music, and how it can help students in many other areas of their life.
“The professional success of so many musicians from St Malachy’s demonstrates the success he had as a teacher. We are delighted that he and other former pupils will be joining us at the College’s first Alumni Recital which takes place on the 22nd of February.”
Tickets for the concert (£15 adult £5 student) are available from the College reception (02890 748285) or at the door on the night.