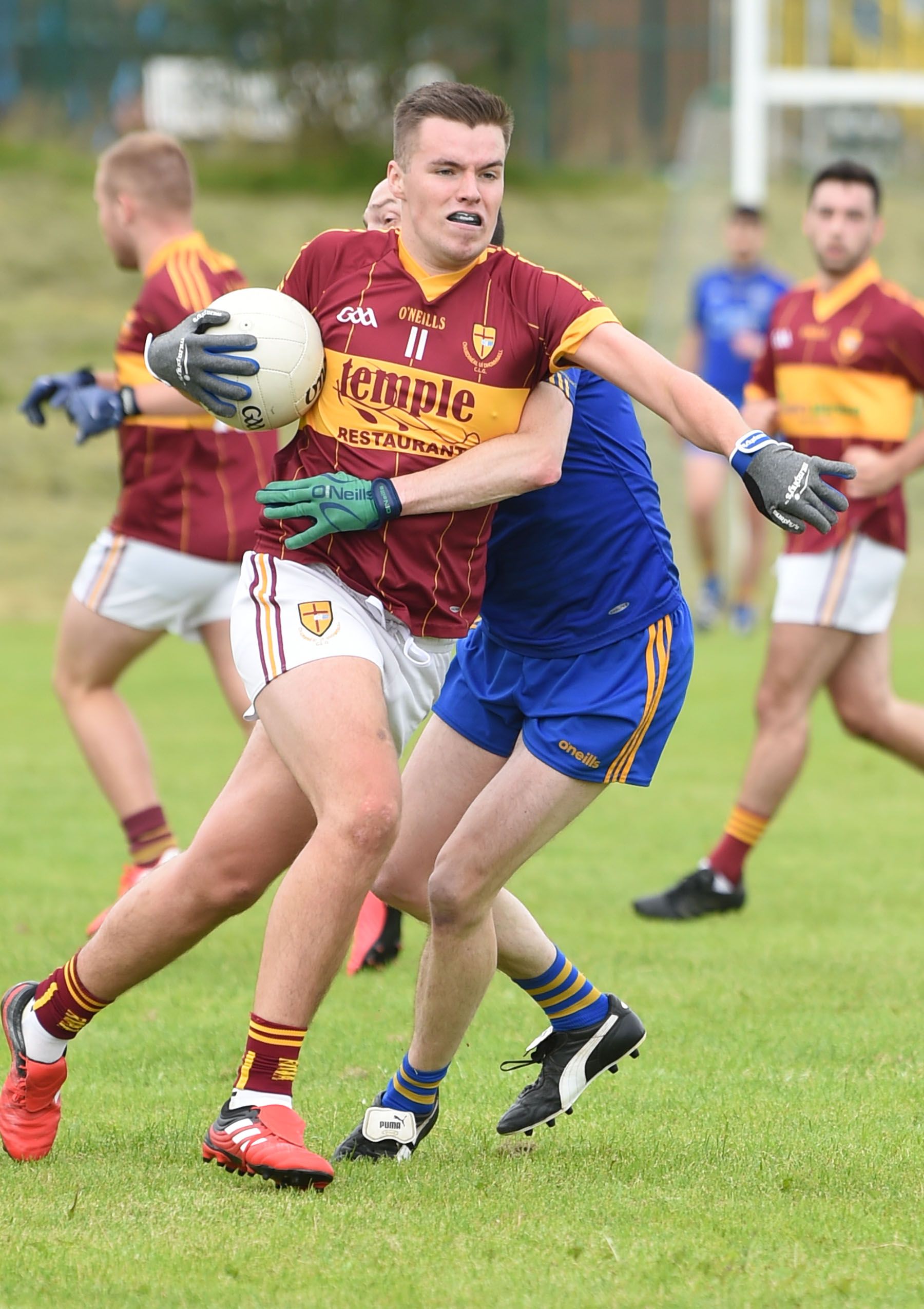 John Rafferty goes on the attack for O'Donnell's

Antrim Senior Football Division Three
O'Donnell's 0-7
St Patrick's, Lisburn 1-20
IT was a successful return for St Patrick's, Lisburn at McRory Park on Sunday as they swept aside O'Donnell's with 16 points to spare.
Both teams were to play the majority of the game with 14 players as Sean Og McVeigh (O'Donnell's) and Michael Fegan (Lisburn) were shown red for an off-the-ball incident midway through the first half, but by this time the pattern had been set with Fegan finding the net on 15 minutes that decisively swung the pendulum in favour of the visitors.
As it was, the entire starting front six and both midfielders were to register for St Patrick's as they cruised home in an impressive display against an O'Donnell's team that showed the odd glimpse of what they can do, but their moments were few and far between.
Francis McMeel was to reel off eight points in this game and he got the visitors off and running from a free a minute in, but Cailean Walsh responded in kind at the other end before putting his side into the lead from play shortly after.
McMeel hit back with two of his own - both from play - before Aaron Thmpson chipped in from a free for Lisburn as they nudged two ahead on 12 minutes.
O'Donnell's hit back with Patrick Meenan finding his range to leave one in it, but a sweeping move by the visitors on 15 minutes saw Fegan take a pass on the overlap and his rasping shot flew high into the net.
It was from a kick-out that the goalscorer and McVeigh tangled, prompting referee Martin Quinn to dismiss both, but by then Thompson and McMell had added points to leave it 1-6 to 0-3.
There was a sense of inevitability by this stage as the Lisburn lads had asserted themselves and a pair of McMell frees either side of a Chris Morgan score helped them into a 1-9 to 0-3 lead at the half.
McMeel picked up where he left off after the restart, scoring from play and a free before Conall Donegan - a half-time sub for the hosts - burst through to score.
Cailean Walsh added a free, but O'Donnell's needed much more to get back into this game and that spark wasn't to come as Lisburn began to pull clear.
A pair of scores from Chris Morgan proceeded both teams emptying their bench with Dominic Devine then getting in on the act with a good score to leave it 1-14 to 0-5 entering the final quarter.
Following the brief stoppage for water, Conor Dixon took over the free-taking role and split the posts for St Patrick's and whilst O'Donnell's goalkeeper Conor Walsh converted a long free, Josh McMullan burst through to reply at the other end.
Donegan hit his second of the day for O'Donnell's with five to play, but this was to be their last score as Lisburn finished strong  as Ben McMullan, Dixon (free), Mark Torbitt and Shane McEvoy raised white to seal an impressive victory  and register the first victory for Cormac McKenna's charges in their third outing and first in over four months of this 2020 league campaign.