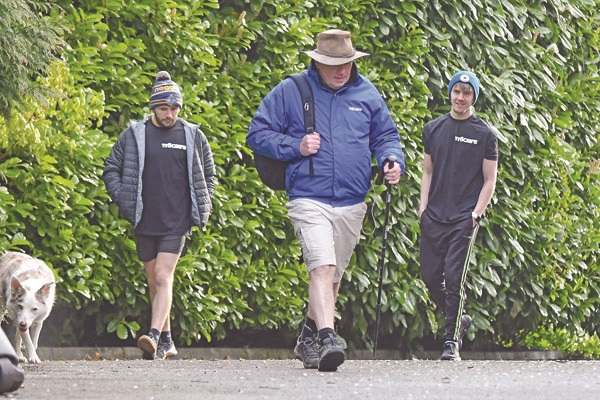 Dr Martin McMullan on his ‘Camino’ trek at home

A RETIRED GP from Lisburn has completed a gruelling 120km walk and raised £40,000 for charity on the week of his 58th birthday.

Dr Martin McMullan, who is a committee member of St Patrick’s GAC, Lisburn, emulated the famous Camino walk from Logrono to Burgos without ever leaving his driveway.

Having started out with a target of raising £500 for Trócaire, Martin has now raised an astonishing £40,000 for the charity with donations still pouring in.

A former GP in West Belfast, Dr McMullan retired in 2014, two years after being diagnosed with Myeloma – a rare form of blood cancer.

As Martin is highly vulnerable, he has been living in his garden shed during the Covid-19 pandemic, sheltering from his wife and three children who are living at home.

His sons Ben, Jack and Josh McMullan were key members of the St Patrick’s, Lisburn side that won the Antrim Junior football title last year with a narrow win over Ardoyne in the decider at Glenavy.

Plans to walk the ‘Irish Camino’ around the Boyne Valley this summer have been affected by the pandemic, so Martin decided to walk the Camino Francais in his driveway while raising funds for charity.

Dr McMullan began his trek last Thursday and did the Camino as it were the real thing - only stopping would he would have reached a village.

Walking over 20 kilometres each day, Martin completed his six-day trek on Tuesday on the day of his 58th birthday.

Martin, who is originally from Omagh, Co Tyrone had well-wishers from all across Ireland, including several high-profile GAA stars.

“The management committee, coaches, players, supporters and families of St Patricks, Lisburn would like to congratulate the outstanding fundraising efforts of Martin McMullan , our club health and well-being officer, on completing his virtual Camino trek,” he said.

“His endeavours have raised the profile of our club but more significantly , he raised the need for urgent funds for Trócaire, during the Covid-19 pandemic.

“We would like to thank everyone who contributed financially and those who provided morale support online and in person, over his six-day trek.

“We would like to extend our thanks to the wider GAA community from all over Ireland for the wonderful support messages and donations. Martin and his family espouse the very ethos of the GAA community.

“We are very proud of his achievements and look forward to celebrating with him at an appropriate time.”

In a statement, Trócaire CEO said: “This is an absolutely amazing undertaking by Martin.

“We are so lucky to have supporters that like him who go the extra mile, in this case quite literally, to support our work in the developing world.

“Our programmes overseas need your support more than ever. The Coronavirus is now present in all the countries we work in, including some of the poorest countries in the world.

“We have seen how this virus has stretched Europe to its limits. Can you imagine the devastation it could cause in countries with no resources to fight it?

“The people your donations support overseas are among the poorest people in the world. They live in communities with no hospitals, no ventilators and no way to keep themselves safe.

“Our focus in the weeks and months ahead is to do what we can to protect them. We must stop the Coronavirus from infecting the poorest people in the world.”

She added: “Here at home we have taken difficult but necessary steps to keep people safe. As a community, we have rallied together. We must also rally together as a global community to protect the most vulnerable.

“Trócaire will do just that in the difficult days that lie ahead. We are proud and grateful for Martin's support and the support of many others like him who stand in solidarity with the communities we work with overseas.”

On Wednesday morning, donations to Martin’s ‘Just Giving’ page had reached £33,500 with over £6,000 more pledged in ‘Gift Aid’ while cash donations will bring his fund-raising tally over the £40,000 mark.