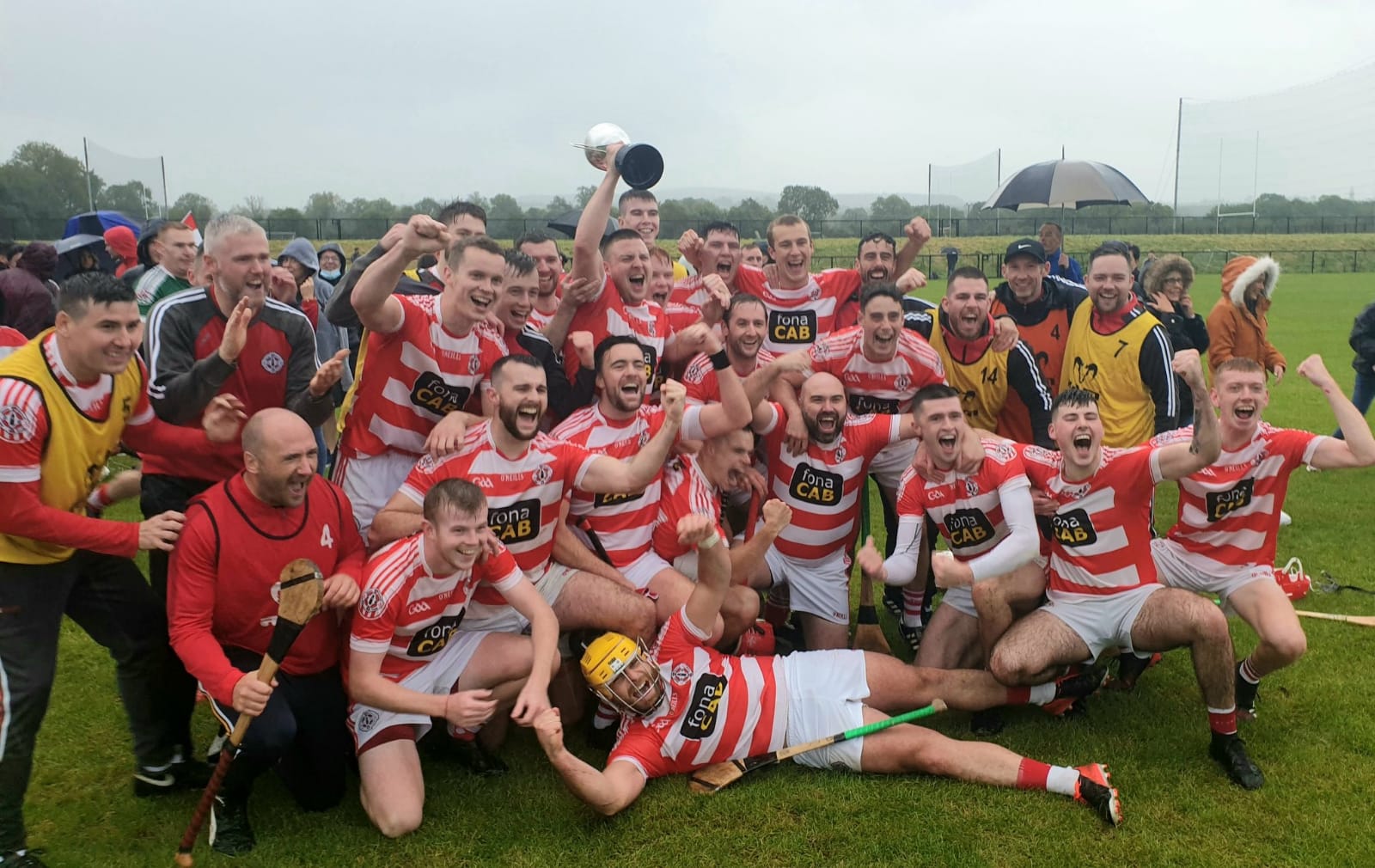 A DOMINANT second-half showing saw St Paul’s lift the Junior Hurling Championship title at the expense of Rasharkin at a wet and windy Dunsilly on Saturday afternoon.

The sides went in level at 1-5 apiece following a tense, low-scoring first half with Caolan Crossan’s goal for St Paul’s coming just six minutes after Donagh Quigg had found the net for Rasharkin.

Yet, St Paul’s, who were beaten by Gort na Móna in last year’s final, bossed the second half – outscoring St Mary’s 2-7 to 0-3 with Mark Munce and Colm McLarnon scoring their second half goals.

Having edged out 2018 winners Cushendun in their semi-final clash a week earlier, St Paul’s were fancied to claim the 2020 junior crown and they got off to a strong start, leading 0-3 to 0-1 after five minutes.

A free from Conor McKeever in the first minute momentarily had St Mary’s ahead, but St Paul’s hit back with points from McLarnon (two) and Stephen Rooney (free).

A foul on midfielder Emmet McFerran held to Rasharkin’s only goal of the game on nine minutes when McFerran’s delivery wasn’t dealt with by St Paul’s goalkeeper Joe Gillan and Quigg was on hand to strike into the net to put Rasharkin 1-1 to 0-3 ahead.

A fine point from play from Rooney brought the sides level on 13 minutes, but the Antrim ace saw a shot on goal saved moments later.

After James Farrell was fouled on the edge of the 13-metre line, Rooney opted to shot for goal rather than take a point, but his effort was brilliantly stopped by Rasharkin full-back Daniel Doherty.

However, St Paul’s wouldn’t have to wait long for their first goal. A free from McKeever had Rasharkin 1-2 to 0-4 ahead at the front water break, but it was to be the last time his side would lead.

On the restart an excellent goal from Crossan moved St Paul’s 1-4 to 1-2 ahead, yet the West Belfast side then proceeded to miss a hat-trick of chances to put further distance between themselves and St Mary’s.

Rasharkin took full advantage with points with back-to-back points from McKeever before Crossan restored his side’s lead with a free on 26 minutes.

With two minutes left of normal time in the first half, McKeever levelled the game once more, yet an advantage would have left the Rasharkin attacker with a chance of a goal.

As the rain became heavier at the start of the second half, the sides exchanges the first two scores with Caolan Ó Duibhfinn briedly putting St Paul’s ahead before McFerran split the posts at the other end.

The key spell in the game came when St Paul’s hit 2-2 without replay in a crucial 10-minute spell which started with Crossan’s free to move his side 1-7 to 1-6 ahead.

With his father Anto watching on, a superb point from midfielder Conal Finnegan moved St Paul’s two ahead before they bagged their second goal.

Rasharkin goalkeeper Aidan Darragh made a stunning save to deny Ó Duibhfinn from close range, but he could do nothing to prevent substitute Munce from following up with the rebound.

The Shaws Road side could have sealed the game on 50 minutes when full-forward James Farrell earned his side a penalty. Yet, for the second successive game, Rooney opted to go for a point from a penalty to put St Paul’s 2-9 to 1-6 in front.

Quigg slotted over a much-needed score for St Mary’s with a fine strike, but it would prove to be futile as, less than 60 seconds later, St Paul’s had their third goal.

A delivery from Finnegan skidded along the wet playing surface, evading the Rasharkin defence. McLarnon was on hand to retrieve possession and dart along the end line before firing a shot across the face of Darragh’s goal and into the corner of the net from a ridiculously tight angle.

As Ronan McKenna rang the changes in the closing stages, his men kept their foot firmly on the throttle with further points from Ó Duibhfinn, Rooney (free) and the lively McLarnon as the crossed the line with 10 points to spare to clinch the 2020 Antrim Junior Hurling Championship in impressive style.