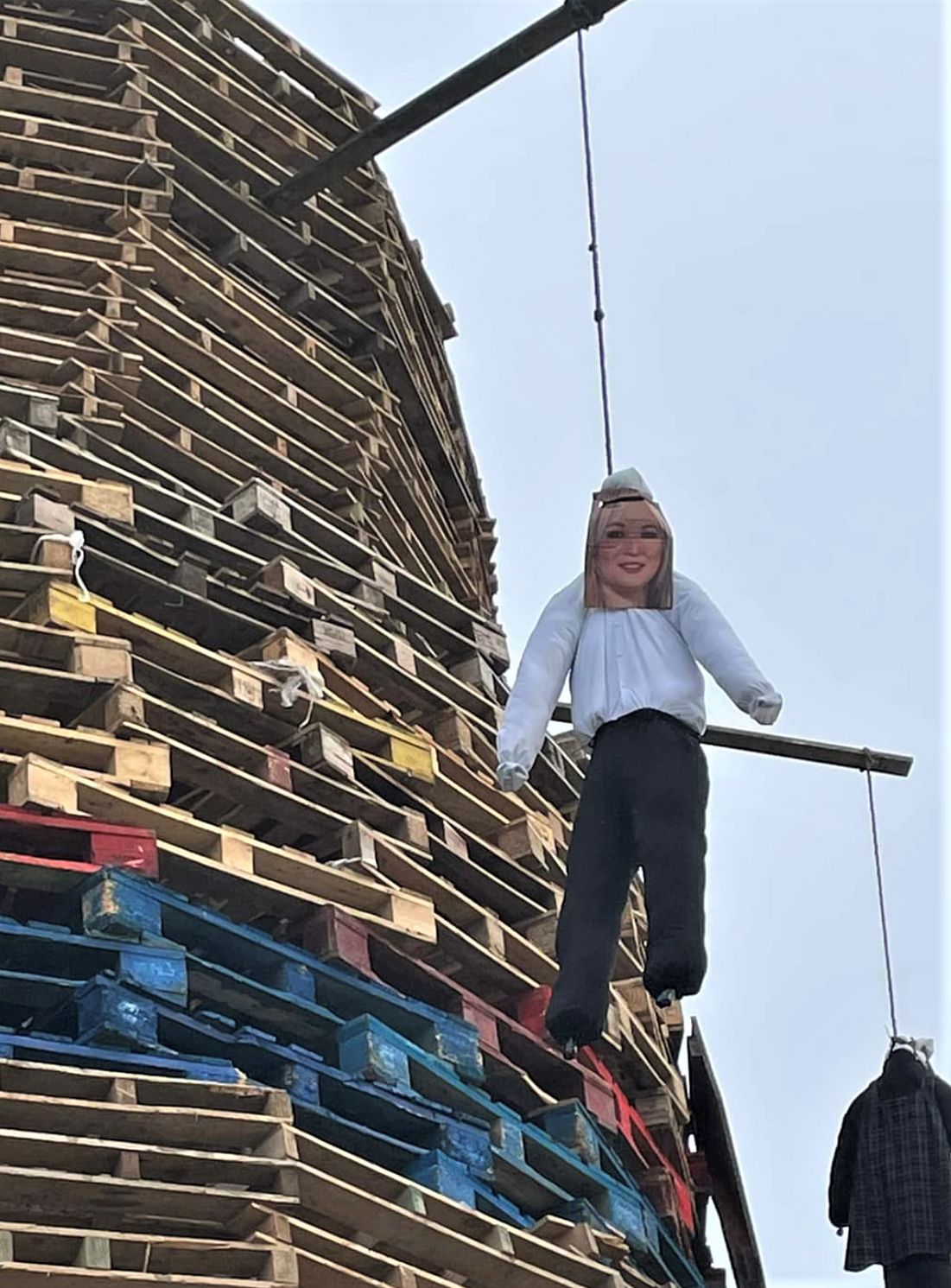 SICKENING: An effigy of Michelle O’Neill hangs from a bonfire in Carrick

CONTROVERSY, sectarian threats and violence have long been associated with the 11th of July bonfires and the marching season. ‘Kick the Pope’ bands and sectarian hate music and songs are a regular feature of many loyal order parades.

This year yet again election posters of Sinn Féin, the SDLP and Alliance representatives competed with each other for space on bonfires. Effigies of Mary Lou McDonald, Michelle O’Neill and Naoimi Long were hung from makeshift gallows. Sectarian, misogynistic and abusive slogans were nailed to bonfires. Among them ‘KAT’ – Kill all Taigs;  ‘All Taigs are Targets.’

This year also a young man in Larne fell to his death as the bonfire builders competed with each other over who could build the biggest and the highest.

This aspect of what unionism euphemistically describes as ‘culture’ can be traced back at least 200 years. The Orange Order was established to defend British interests and British domination in Ireland. Andrew Boyd’s seminal book – ‘Holy War in Belfast’ – and Michael Farrell’s ‘The Orange State’ are among those which record the use of sectarianism by the British state and the unionist political elite to maintain their supremacy in the 19th and 20th centuries.

Sectarian riots and pogroms were a familiar pattern in Belfast during this period. Effigies also played their part. Lundy, or rather an effigy of him, is burned every year in Derry as part of the Lundy’s Day parade to mark the 1688 Siege of Derry. Lundy was the Governor of Derry who offered to surrender but was thwarted when the apprentice boys locked the city gates.

One of the worst examples of prolonged sectarian violence occurred in August 1864 when loyalists burned an effigy of Daniel O’Connell on the Boyne Bridge between Durham Street and Sandy Row and then attacked the Catholic Pound area in the Falls area. In the days of violence across Belfast that followed 11 died and hundreds were injured. Over 800 families were forced to flee their homes and 247 dwellings were destroyed.

Despite the sectarianism that surrounds the July bonfires there are those in the media and within political unionism who insist it’s not threatening but part of the cultural tradition of unionism.

If similar effigies and slogans against people of colour or Muslims or Jews were to appear in any other state within the European Union or in the USA or indeed in Britain they would immediately be labelled as hate crime and action taken to remove them and to hold those responsible legally accountable. Not here.

Instead we have the PSNI and Prosecution Service failing to stand up to this behaviour. No action taken to remove the offending material. No action taken to dismantle bonfires that carry this material. And little prospect of charges for hate crime being taken in the time ahead. I have personal experience of this. In the past I have made complaints about sectarian threats made against me.

I understand the frustration that many now feel following another July bonfire period. It is unacceptable. Let the Twelfth be celebrated. The Orange tradition is part of what we are. But the unacceptable excesses around the bonfires, the sectarian chants or songs, and some of the locations and size of the bonfires cannot be tolerated.

If we are to build a better future there can be no place for sectarianism – no matter who is responsible. The Good Friday Agreement clearly states that citizens have the right to ‘freedom from sectarian harassment’. We have to make this core principle a reality by enshrining into law an effective legal definition of sectarianism with legal sanctions and robust incitement to hatred provisions. Those who use effigies and slogans and posters as symbols of hate must know without a doubt that they will be prosecuted. And if anyone wants to build a bonfire there should be rules and regulations governing where and when and how high.

In the new Ireland there will be a place for the Orange. Marches and bonfires will be part of that. But there can be no tolerance of sectarianism and hate, from wherever it comes.

Comforting benchmark of a strong community


I LIKE to spend as much time as I can outdoors. Now in case I give the wrong impression let me make it clear that I am not all the time walking or hiking. I do that sometimes, but mostly I just sit. That’s why I like benches.

I have one I inherited from our old neighbour Billy McCulloch. Truth to tell, I inherited only the metal ends. The wooden stays had long ago given up. Billy was a great wee man. A lover of poetry. The lads in the Mens’ Shed in Cooley fixed his bench for me.  I celebrate Billy’s friendship by sitting on his bench and raising a glass to his memory. Then I read aloud a poem. One of Seamus Heaney’s or Patrick Kavanagh’s. So that bench to me will always be Wee Billy’s bench.

The late, great Desi Ferguson made me a magnificent bench. Des was a mighty worker with wood as well as a great footballer and a lovely hurler. And a great friend.  His bench is mighty. He made me other pieces of wooden furniture. Martin McGuinness also benefited from Des’s generosity and his woodworking skills. Des’s bench will last longer than me. It outlasted Des. And Martin. It is constructed from old hard wood and it is shaped to allow the sitter maximum comfort. The arms also are constructed to allow you to set a glass or a plate beside you. They widen out. Handy. I think of Des often but feel especially close to him when I am seated in the bench he made especially for me.  Go raibh maith agat, Des.

I think there should be benches in all our public spaces.  In the Falls Park some benches are dedicated to local people. That’s a nice idea. There are good benches in the City Cemetery also. But only at the front. Why not at the back?  And why not outside it?  There are none at all in Milltown, I note. Why not?

Decades ago when our community set out to reclaim our public spaces some people understandably were concerned that these revamped areas would be overrun by anti-social elements. Others felt that we could not let this determine how we live. That was my view also. We needed strategies and resources to address anti-social behaviour and many good people do this in multiple ways. From Féile to numerous youth initiatives, our local schools, multiple sporting groups, a brilliant community and voluntary sector. We are blessed with good people.

And in the meantime our civic space increases from the new walkways on the mountain, to Colin Glen, the Bog Meadows,  the Springfield Dam, the wonderful Dunville and Falls Parks,  new greenways, Casement and the upcoming development of that part of the district. The revamped Saint Comgall’s. The front of Coláiste Feirste.  Our mountain trails would benefit greatly from a few strategically placed discreet benches. Not all of us can hunker down in the heather. The views are magnificent. Imagine sitting there in comfort above it all. On a nice bench. Looking over to Scotland and Strangford. Or Lough Neagh.

It’s also great to see the many coffee shops and other wee eateries with their pavement tables and chairs being well used in this good weather. Though I note a number of shabby derelict shops in marked contrast to our new prize-winning architecture.  But I’m sure that these too will be sorted out in the time ahead.

In the meantime let’s dot our streetscapes with benches. A community bench is a very democratic civic essential. It encourages people to get out in the knowledge that they will have a place to sit if the notion or the need takes them. It becomes a focal point for pedestrians to take a wee rest and watch the world go by or have a yarn with other citizens. Bí i do shui agus lig do scith.

For example, the bottom of the Whiterock Road where it joins the Falls is perfect for a bench. And up above Connolly House at The Busy Bee? Surely space for a few benches? And throughout our neighbourhoods. Little civic spaces. Wee community gardens. Community benches.