Threat against West Belfast teen after he floors UDA man 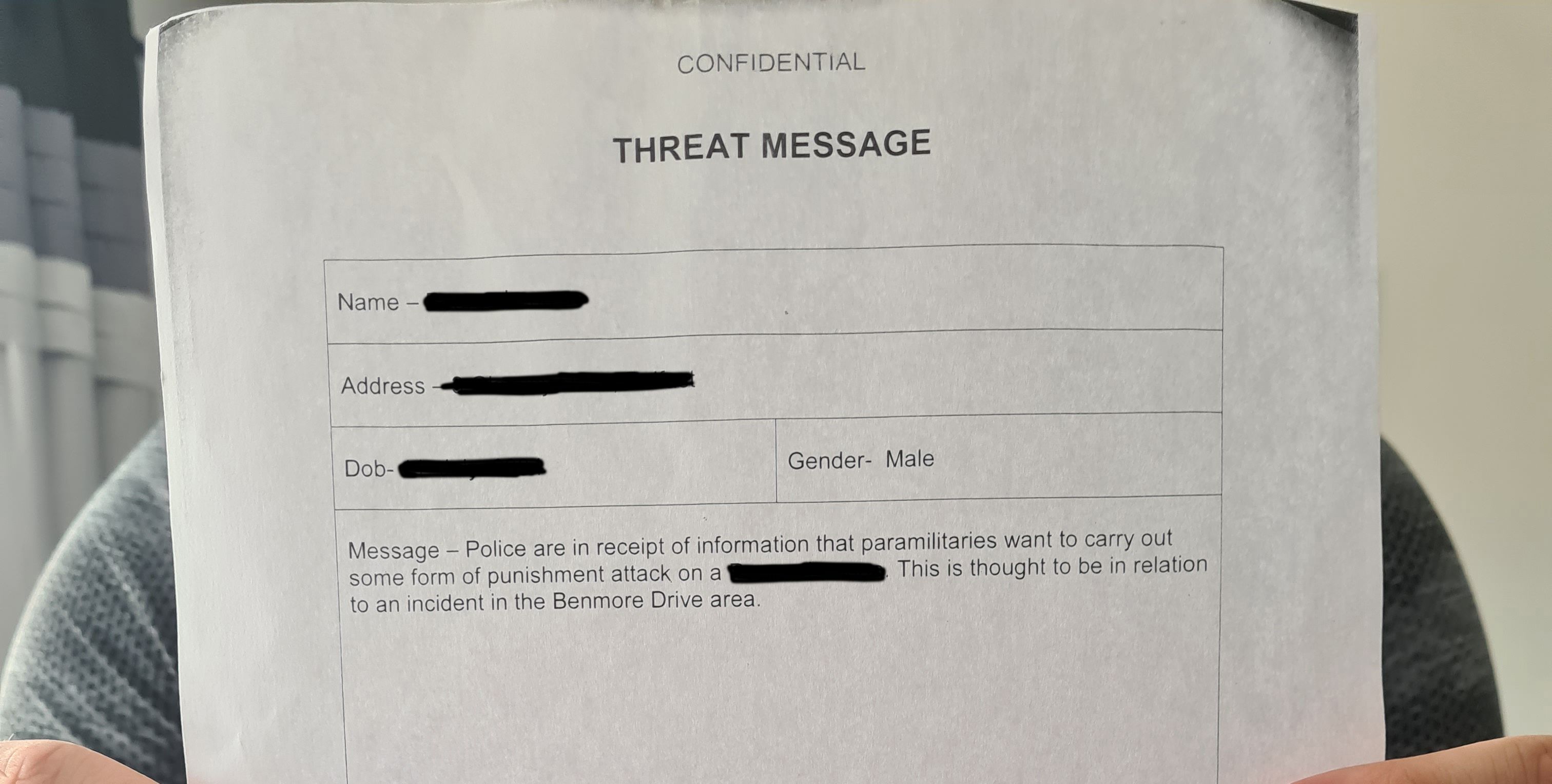 WARNING: Police delivered this message to the family of the 16-year-old following the incident in Finaghy

A WEST Belfast teenager has been warned of a threat from loyalist paramilitaries after he was forced to defend himself during a violent altercation in the Finaghy area.

The Twinbrook 16-year-old was punched in the face by a grown man during an attack in Benmore Drive off Finaghy Road South last Friday evening.

Despite being hit, the schoolboy bravely fought back and managed to knock his attacker to the ground.

On Sunday, the PSNI visited his home to deliver a threat message after receiving information that “paramilitaries want to carry out some form of punishment attack” on him in the wake of the incident.

In a further attack in the same street, which police believed is linked, a woman was battered in her home by a gang of men claiming to be the UDA. The threat was delivered just hours after this attack.

Recounting his ordeal, the teen said: “There was a scooter lying in the street and one of my friends started driving it. They drove it about 10 yards down the street when this wee lad, who was about First Year, said that’s my scooter, so we gave him it back and thought nothing of it.

“We got into my friend’s garden and this white Seat Leon pulled up – two men jumped out and started shouting and screaming. They started threatening us saying ‘We’re going to break your legs.’

“I told him to f**k off and then he walked into the garden and hit me a dig. Straight away I started hitting him back. His friend tried to hit me when I had my back turned, but my friend restrained him.

The man that hit me then fell to the floor, got up, stumbled out the garden, and got a cloth for his face. Then he said ‘You better get out of this estate, you don’t know who you’re messing with.’”

During the attack, the group of teenagers were subjected to a barrage of sectarian abuse including being called “Fenian c**ts.” The second assailant also bit the teen who restrained him and attempted to gouge his eye.

After this incident, on Sunday evening a gang claiming to be from the UDA visited the house where the attack took place and assaulted the female occupier.

Witness reports say the woman was savagely beaten after refusing to hand over the group of West Belfast teens who were attacked two days earlier.

It is understood that the victim has since fled the area.

Speaking to the Andersonstown News, the mother of the under-threat teen branded the ordeal as “disgusting”.

“For a child who has Protestant friends and wouldn’t have thought about anything like this, look what they’ve done,” she said.

I can’t even believe that this still goes on. It’s just disgusting to me – really unbelievable.
I’ve told him he can’t go back near the estate, which is terrible because he has friends there, but he knows he can’t go back.

“He’s afraid to go out now – he really is afraid.

“I’m just thankful that he was able to handle himself because I don’t know what would’ve happened.”

A PSNI spokesperson said: “Police received a report of an assault in the Benmore Drive area of Belfast on Sunday evening (September 6th).

“Officers were made aware of a possible link between this incident and an altercation occurring in the Benmore Drive area which is reported to have taken place on Friday evening, September 4th. Enquiries are continuing.

“A 40-year-old man was arrested on suspicion of assault and released pending a report to the Public Prosecution Service.”

Police said that while they do not discuss the security of individuals, “no inference should be drawn from this”.

“However, if we receive information that a person’s life may be at risk we will inform them accordingly,” a spokesperson added.

“We never ignore anything which may put an individual at risk,” added the spokes-person.