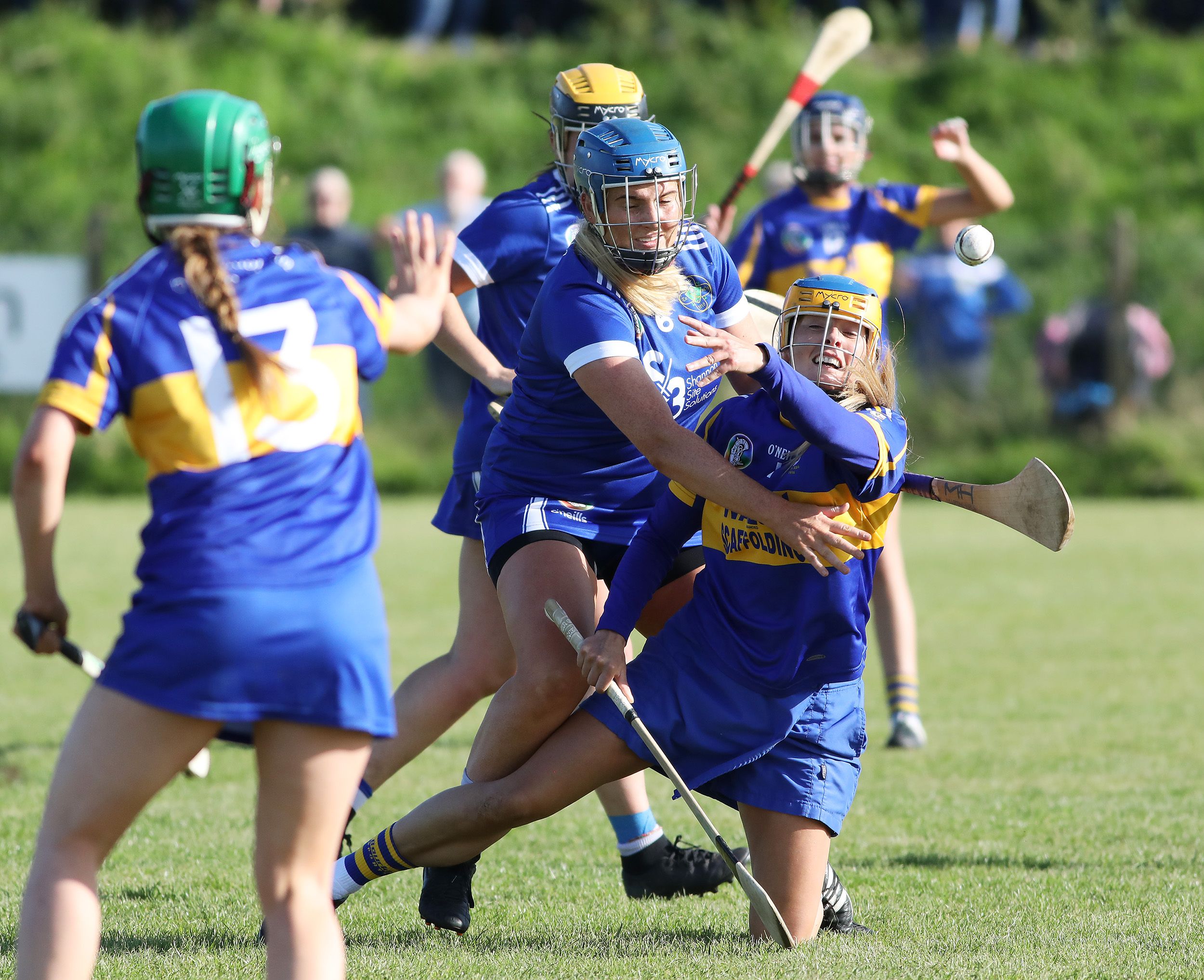 GOALS at the perfect moments ensured Tír na nÓg claimed the Antrim Intermediate Camogie title against Rossa at the second time of asking on Saturday.

The sun in Ballymena was in stark contrast to the wet conditions from the previous week's drawn encounter and this resulted in a much more open game that seemed to be going the way of Rossa before two key moments turned this game on its head.

Múirín Quinn was forced off with an injury midway through the opening period and this was to be as severe blow to the Rossa defence and then they were hit with a rather fortuitous goals from the ever-impressive Emily Falloon that spurred the Randalstown outfit on.

The sides were level early in the second period, but Tír na nÓg again struck for goals at key stages that were to keep Rossa at arm's length as they went onto claim victory.

Falloon was a constant thorn in the side of Rossa as she played in a deep role and was central to most off what Tír na nÓg did, whilst Aine Devlin was again excellent from placed balls.

Despite making a dream start with two early goals, Rossa just couldn't get enough going in attack thereafter as the Tír na nÓg defence shut down the avenues and won the battles from any rucks that developed.

This game was a much better affair than seven days previous, but some things didn't change with Devlin - who was her side's only scorer in the drawn game - on target early from a free.

However, Rossa quickly settled and after a couple of missed opportunities, they struck for the game's first goal on five minutes when Orlaith McCall's long free was fumbled by Tír na nÓg goalkeeper Aimee McAtamney and Riona Matthews pounced to prod home.

They were in for a second goal five minutes later when a fine move saw Sarah Armstrong avail of an advantage to find Matthews who was provider as the pop-pass to Eimear Byrne was the wing-forward fire to the net.

Michaela Press made a good save at the other end from Carla O'Neill but Rossa added to their tally with Natalie McGuinness converting a free to move them 2-1 to 0-1 ahead at the water break.

Múirín Quinn was forced off after trying to play through an injury and this seemed to unsettle the Rossa defence as Tír na nÓg stepped up a gear and began to take charge.

Devlin got them motoring from a free and another from play before they hit their first goal on 25 minutes as Falloon's long shot for a point dipped and evaded Press with the ball going into the net.

The scores began to flow for the Randalstown side with Devlin (free), Falloon, Caitlin McGaughey and Michaela Hegarty finding their range but Rossa did have the final say of the half from a McGuinness free to leave them just 1-7 to 2-2 behind at the break despite being outplayed in the second quarter.

The Belfast girls began the second half well with a pair of McGuinness frees levelling the game and she tied the game once more when pointing on the run after Devlin had nudged Tír na nÓg  back in front.

However, Tír na nÓg again took charge with Devlin putting them back into the lead from a free and on 43 minutes they surged further clear when Caitlin McGaughey's ball in was claimed by Carla O'Neill who found Falloon and she made no mistake with the finish to the net.

They almost struck for goal straight after but Bronagh Orchin cleared off the line from Hegarty who did hit a point moments later as Tír na nÓg led 2-10 to 2-5 at the water break.

They were now in the driving seat and gave Rossa a mountain to climb on 50 minutes when Press was pickpocketed by Niamh Martin in her own penalty area with the ball being fired to the net.

A Hegarty point followed as Tír na nÓg looked to have put the game to bed, but credit to Rossa who refused to give up and after Orlaith McCall landed a long free, they grabbed a lifeline when McGuinness found the net from a close-in free to leave just five in it with as many minutes of normal time remaining.

However, they just couldn't create the opportunity for another major that really would have set up a grandstand finish as Tír na nÓg's defence held firm and cleared any danger.

They put the icing the cake four minutes into stoppage time when Devlin finished what she had started with her long free dipping and finding the net to seal their victory and statues as Antrim Intermediate Camogie champions for 2020.