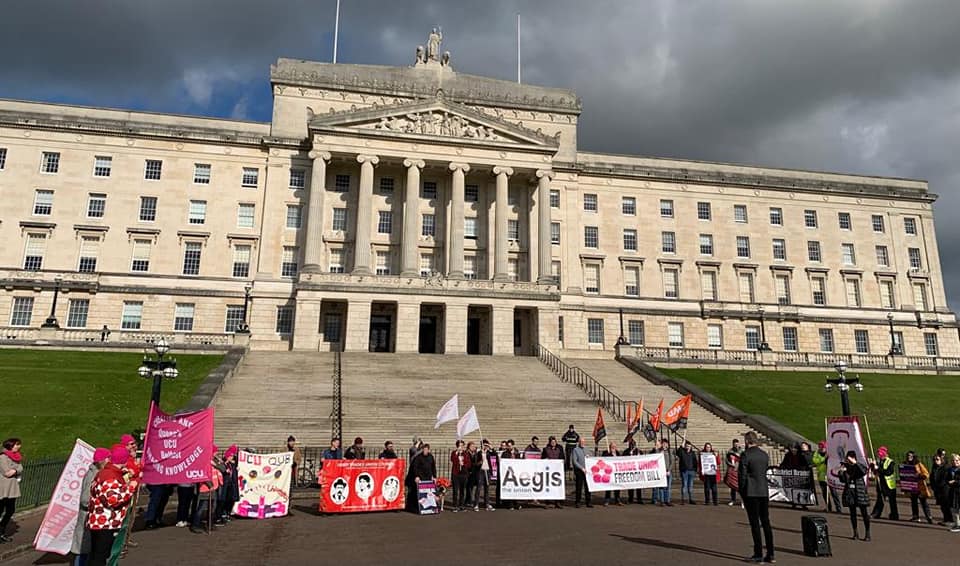 SOLIDARITY: Trade unions rally in support of the People Before Profit Bill

PROPOSALS to repeal anti-trade union legislation have been rejected by the Assembly.

MLAs voted by 43 to 38 to reject the bill by People Before Profit's Gerry Carroll, who said it would "remedy" laws which stem "back to Margaret Thatcher and her attacks on striking workers."

The People Before Profit proposals were supported by Sinn Féin and the SDLP, but were defeated by votes from the DUP, UUP and Alliance Party. The Green Party abstained from the vote.

The Trade Union and Labour Relations (Amendment) Bill would have allowed unions to show "solidarity action" with workers in other sectors or workplaces.

It would have reduce the required notice period before a union can take industrial action from seven days to two, and lowered the minimum number of employees needed for an employer to consider a request for industrial action by a trade union from 21 to five.

The raft of reforms, which aimed to make it easier for workers to strike, would also have removed the requirement for a postal ballot process before taking industrial action, allowing for a ballot to be conducted digitally or in-person.

Ahead of the vote, several trade unions attended a rally outside Stormont in support of the Bill.

Moving the Trade Union Freedom Bill this week in Stormont.

It wasn't passed *this* time. But hopefully we'll be back again with more bills for workers rights.

There is power in a union✊✊ pic.twitter.com/1x6L5Bwvx5

Striking members of the University and College Union (UCU) at Queen's, as well as members of NIPSA, GMB, the National Union of Journalists (NUJ), Aegis, the Allied and Bakers Union and the Derry Trades Union Council, urged MLAs to vote for the Bill.

Speaking during the debate, West Belfast MLA Gerry Carroll said his Bill would "reverse the trend of decades of attacks" on trade unions.

"There is an onus on the assembly to hear the appeal of workers that has been left shamefully untouched for over 20 years," he added. "This decade should be one in which workers' rights are protected."

"I am concerned that the only reason for reducing the notice period would be to cause maximum disruption at a time we can least afford it," he said.

"Disgracefully, parties that present themselves as 'liberal' couldn't stomach voting against Thatcher's anti-union laws which haven't been touched from when they were installed here. People should remember where their MLAs stood on this issue and how they voted.

"Despite tonight's disappointing result, we will still raised the banner of workers' rights at every opportunity and I'll be back on picket lines with striking workers in the morning."