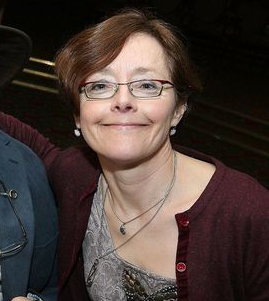 Mourners lined the Falls Road from Coláiste Feirste to An Chultúrlann this afternoon for the funeral of Aoife Ní Riain, who died suddenly last week.

Originally from Dublin, Aoife moved to Andersonstown in the 1980s with her then partner Gearóid Ó Cairealláin.

She became an integral part of the the West Belfast community and was amongst those visionaries who contributed to the foundation of the North’s first Irish medium post-primary school, Meánscoil Feirste.

Aoife was also instrumental in the creation of Ireland’s first Irish language daily newspaper, Lá, which was published by a small band of Irish language activists.

A talented concertina player, Aoife was well known on the local trad scene, featuring in sessions around the city and beyond. Her keen ear for music and love of the Irish language also saw her become a regular presenter on Raidió Fáilte.

She spent many years working as a librarian at Belfast Central Library where, in addition to her own research work, she helped encourage the regeneration of the city’s wider Northside area.

Aoife was also a proud mother of sons Ainle, Cairbre, and Naoise Ó Cairealláin who all became leading lights in their own fields.

Having previously found success as a strength and conditioning coach with Cork’s intercounty footballers, Ainle has founded his own training facility, ACLAÍ, in Cork city.

Cairbre is a former Arsenal FC coach who is now the strength and conditioning coach for Tipperary’s All-Ireland-winning hurlers.

Speaking ahead of today’s funeral, Aoife’s friend Áine Nic Gearailt, of An Ceathrú Poilí bookshop, said: “Aoife was there from the beginning, all through the years of the Ardscoil, Conway Mill, Owenvarragh Buildings and finally, An Chultúrlann. She was a friend, a support, a steadying influence, a quiet presence. She always read, always had a book to hand.

“Music she loved too and playing the concertina. She loved the language and believed in a life lived through Irish and this belief infused her home life, her work life, her social life. Her greatest love was for her three sons, Ainle, Cairbre and Naoise – her pride and joy, na gasúraí.”

Raidió Fáilte Manager, Fergus O’Hare, described Aoife as a "gentle kind and thoughtful person" who was "always considerate and helpful to her work colleagues and volunteers in Raidió Fáilte."

“For many years she has been a quiet stalwart of Irish language community, involved in many of the activities and campaigns in support of proper facilities and recognition for the Irish language," he said.

“She was a talented traditional musician, playing in a number of sessions in Belfast and travelling to play at music festivals throughout the country. She organised a weekly session in the Raidió Fáilte cafe, An Lon Dubh.

“Many people enjoyed the eclectic range of music and chat on her weekly show on Raidió Fáilte. Aoife will be sadly missed and fondly remembered at Raidió Fáilte by the directors, staff, volunteers and by the many listeners to her popular radio show.”

Aoife’s friend and Raidió Fáilte colleague, Máire Nic Fhionnachtaigh, said: “Aoife had many friends in Belfast who, having similar interests including the Irish language, trad music - not just trad, the outdoors, cinema, books and current affairs, spent many happy times together on trips, from Teileann in Donegal to The Great Blasket, with lots of Leitrim in between.

“Good times were had also in many of Belfast's restaurants, pubs and cafes. We cherish those times and are devastated by the loss of our great, forever friend."

Naomh Pól CLG stated: “The committee and members of CLG Naomh Pól wish to express our deepest sympathy to members Ainle, Cairbre and Naoise Ó Cairealláin on the passing of their mother Aoife Ní Riain. Our thoughts and prayers are with you all and the wider family circle.”

Her coffin was shouldered from Coláiste Feirste to the Cultúrlann afterwards. Friends and comrades lined the route or walked behind her coffin to cover the short distance between two Irish language institutions in which she was deeply involved.

At the Cultúrlann, friends from the traditional music scene played some of her favourite tunes. As the musicians finished, there was a spontaneous burst of applause from mourners.

Aoife’s remains were taken to Roselawn Crematorium for cremation at 2.00pm.