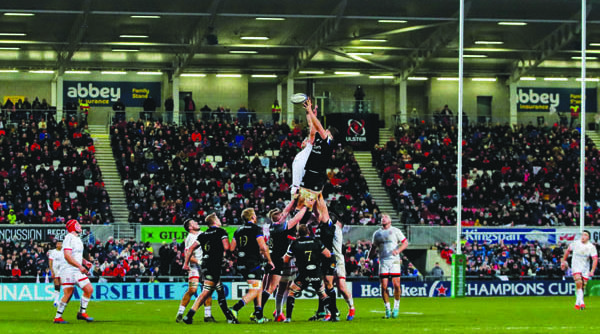 ULSTER Rugby’s Chief Executive remains hopeful that a restricted number of fans would be permitted into the Kingspan Stadium when the new Pro14 season begins in October.

However, plans to bring back spectators to games would be dependant on social distancing guidelines being eased from two metres down to one.

Ulster are set to resume training on Monday (June 29) ahead of a return to competitive action in August. All playing and coaching staff will undergo Covid-19 testing this week before being given the green light to train.

While rugby fans will no doubt welcome the inter-provincial derbies, which are scheduled for August, the prospect of no gate receipts will hit the provinces hard.

However, the Stormont Executive has not published any such plans to date, but Jonny Petrie said Ulster already have a clear plan in place.

“There's a real importance in providing revenue generating rugby and getting people back through the doors but also giving people a social outlet as well,” said Petrie.

“If the social distancing restrictions are reduced to one metre, then we think we would have a clear plan where we would be able to get people back in through the doors but in reality I don't know when that's going to be.

“Our first match of the 2021 season in the Pro14 would likely be at the beginning of October effectively anyway.

“We've not been able to sell tickets for next season because we don't know what a restricted capacity would be.

“So that's something we would try and target to see if there is at least a restricted capacity we could get back into the stadium but we would have to see how things develop.”

The Pro14 season will return from a five-month hiatus with the inter-provincial derbies played behind closed doors on Saturday, August 22.

The league's resumption will see teams from the same nation play against each other before the season is concluded with semi-finals and a final.

The teams finishing in the top two places in Conference A and B will contest the semi-finals.

That final is scheduled to take place on Saturday, September 12 with the venue to be confirmed.

The season will have an abbreviated finish that features the most attractive match-ups and rivalries from the Pro14 with two rounds of derby games in each territory counting towards final positions. This will cut the regular season from 21 games to 15.

Matches postponed prior to the indefinite suspension will be deemed 0-0 draws as previously stated by Pro14 Rugby on 28 February.

The postponed Round 13 fixtures Zebre versus Ospreys and Benetton versus Ulster have now been deemed 0-0 draws and all four teams will have two points added to their totals as a result.

Derby rounds in Italy, Scotland and South Africa will see the two teams from each territory play back-to-back fixtures.

The derby fixtures for the teams in Ireland have yet to be confirmed and will be announced in line with kick-off times and broadcast selections.

Rankings for European qualification for next season will be decided on the table positions from Round 13.

This will include the points awarded to teams whose postponed games in Round 13 have been deemed 0-0 draws.

Once the competition formats for the 2020/21 season have been announced by EPCR, then Pro14 Rugby will confirm its qualifying teams for the Heineken Champions Cup.

Connacht are set to join the other three Irish side in the Champions Cup next season based on this judgement.

Defending champions Leinster are already guaranteed to finish top of Conference A as they currently hold an unassailable 18-point lead, while Ulster hold a nine-point advantage of third-placed Glasgow.

In Conference B, Munster are also well placed for a spot in the last four with an eight-point advantage over Scarlets in third.

Connacht sit fourth in the table, 10 points off the top two thus leaving their semi-final aspirations hanging by a thread.

Tournament Director of the Guinness Pro14, David Jordan, said: “Safety has been, and will continue to be, the highest priority as we look to activate our plans to restart the 2019/20 season. We are very fortunate to be in a position where everyone involved is confident that we can conclude the season on the field of play.

“The work and diligence of our leading medical personnel at our unions, our clubs, World Rugby and key stakeholders to get us to this point has been immense.

“Operating across five territories often brings different complexities to the Guinness Pro14 but our unions have worked hard to bring proposals to their governments so we may put plans into action.”

Planning for next year's Pro14 season has begun with October 3 scheduled as the provisional start date.