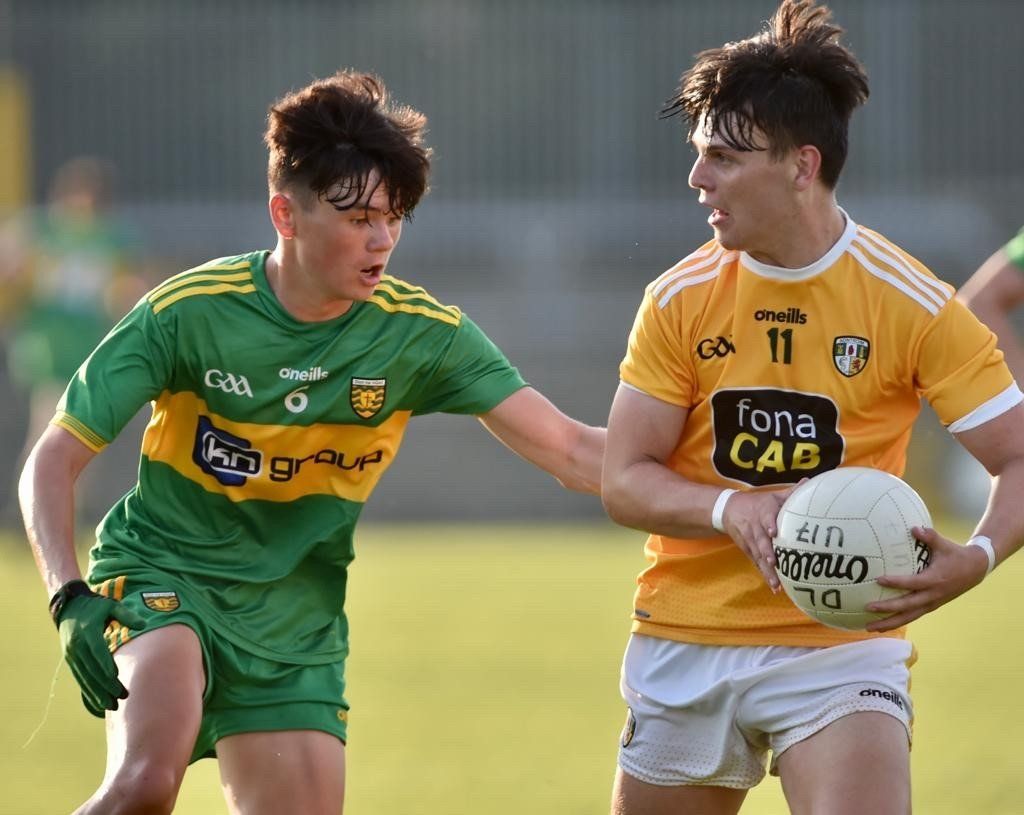 DONEGAL produced a devastating performance of power, pace, athletisism and no shortage of excellent scores to overwhelm Antrim in Wednesday night’s Ulster Minor Football Championship preliminary round tie in Ballybofey.

A goal from Paddy McElwee gave the hosts a 1-10 to 0-6 lead at the break and Donegal were ruthless in the second half as further goals from McElwee, Michael Callaghan and Man-of-the-Match Kevin McCormack gave them a 26-point victory.

On a night when simply nothing went right for the Saffrons, they ended the game with 14 men with St Gall’s defender Callum Walsh picking up a red card for a double booking in the second half.

“I’d imagine Donegal will have serious ambitions of wining at least an Ulster title,” said Hastings.

“We played most Ulster teams in the build-up to that game and we were competitive. There were one or two points in most of the games. We never expected that – we weren’t prepared for that kind of scoreline.

“Connor was concussed so couldn’t return, Tom went down on his knee in the first five minutes and Tiernan, who came into the game with a bit of a dead leg, picked up another one.

“We knew we were up against it – we didn’t see that coming. We talked so much to the boys about unforced errors ... that led to so many scores for Donegal."

Donegal bossed the game right from the off as Antrim struggled to break down their packed defence while a number of handling errors and slips compounded Antrim’s early woes.

Conor McGinty opened the scoring for the home side and, while Tom Shivers responded at the other end for the Saffrons, Donegal found their scores much easier in the opening minutes.

They lead 0-4 to 0-1 after just five minutes thanks to further points from midfielder Conor Reid and forwards Daniel Marley and McElwee.

Shivers was then forced off the field with a knee injury while Sean Byrne bagged Antrim’s second point from a free.

The Saffrons might have sensed it wasn’t going to be their night when captain Connor Hastings crashed a scoreable free off the post on 16 minutes, although the Randalstown native scored from a free on the stroke of the first water break.

However, Donegal had already tagged on another hat-trick of points at the other end via Ward (two) and a free from captain Luke McGlynn.

On the restart, McGlynn scored an excellent point following great build-up play from Donegal before Antrim had a great chance to hit back with a goal at the other end.

A long delivery from Paudie Gowdy played full-forward Niall Fallon through on goal, but Donegal goalkeeper Aaron Cullen got down low to his left-hand post to make a smart save and the subsequent ’45 failed to yield a score for Antrim.

The lively McCormack hit two points from play either side of a Diarmuid Rogan effort for Antrim and things went from bad to worse for the Saffrons when Hastings was forced off with concussion.

The visitors briefly cut the gap back to four when Jonny Hannnon clipped over a free, yet Donegal had been threatening to get in for a goal and they found the back of the Antrim net in first half injury-time.

McCormack was involved in the build-up along with Karl McGee allowing full-forward McElwee to come at the back post for a well-worked goal.

Rogan tagged on another point on the cusp of half-time as Antrim trailed 1-10 to 0-6 at the interval.

Antrim boss Seamus Hastings was forced into a third substitution at the break as wing-back  McCormack was unable to continue after picking up a dead leg in the first half.

The home team took control of proceedings in the third quarter, holding Antrim scoreless and hitting 2-4 without reply.

Donegal substitute Ethan Friel opened his side’s account in the second half before Marley intercepted one of Linton’s kick-outs and played the ball inside to the unmarked McGlynn, who scored certain to score.

Linton redeemed himself with a stunning point-black save, but the luckless St Paul’s clubman couldn’t prevent McElwee from scoring with the rebound.

To compound Antrim’s dire situation, wing-back Callum Walsh was dismissed for a second yellow on 43 minutes just minutes after picking up his first booking.

McElwee and Callaghan hit further points either side of the second water break as Donegal dominated the middle third  - winning a remarkable 11 kick-outs in succession midway through the second half.

Another brace of points from McElwee and McGlynn preceded Antrim’s first point of the second half – a free from Gowdy after 55 minutes.

Antrim’s final point came via another free from Byrne a few minutes later, but Donegal kept their foot firmly on the throttle for the entire duration of the game.

Callaghan rounded off a brilliant cameo by ending with 1-3 while McElwee got the goal his performance deserved in injury-time to complete a miserable night for Antrim while Donegal progress to face Monaghan in next week’s quarter-final.