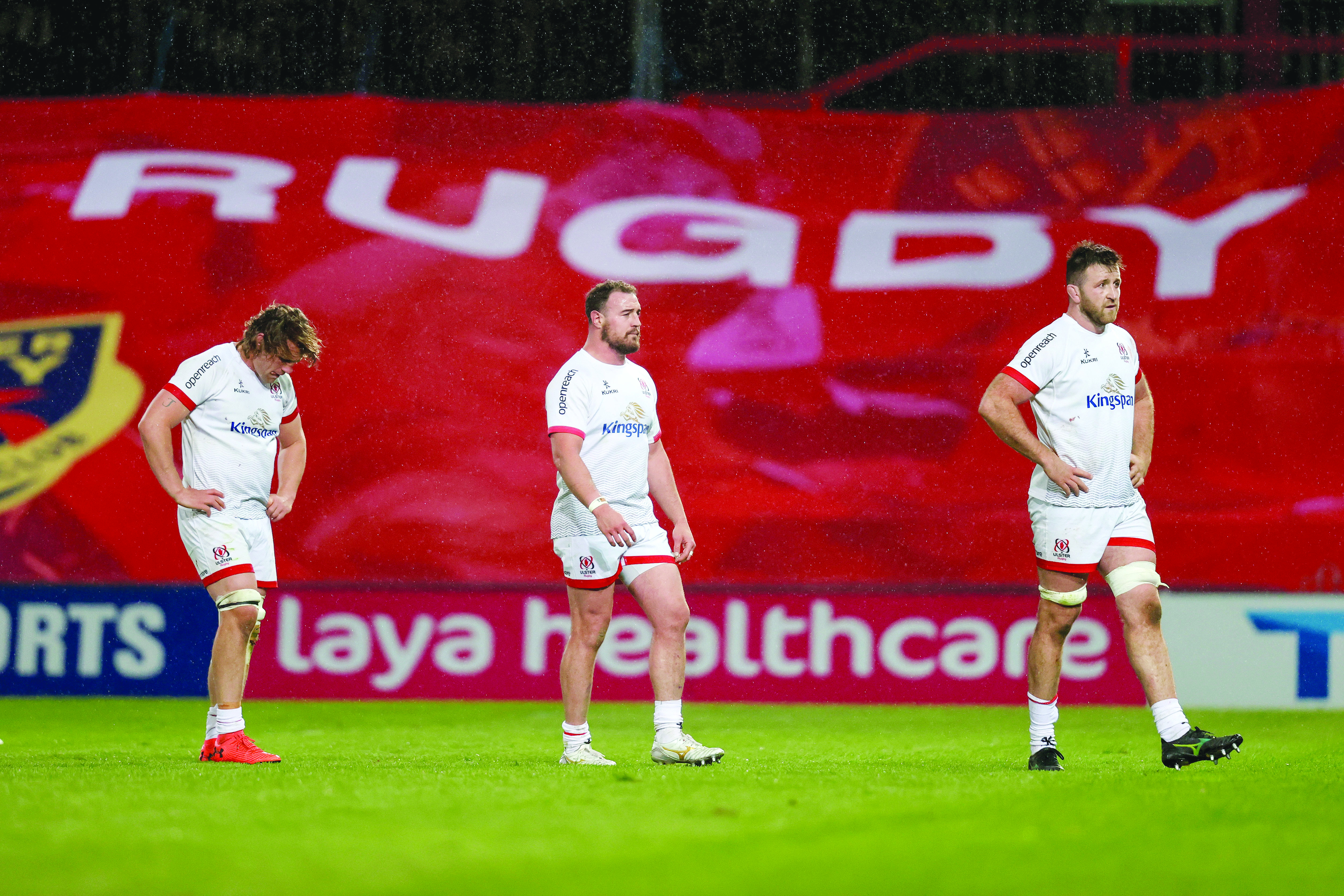 Jordi Murphy, Rob Herring and Alan O'Connor trudge off the Thomond Park pitch last week as defeat to Munster all but ended their Rainbow Cup hopes, so pride is at stake when they face Leinster at the RDS this evening (Friday) INPHO

IT has been a difficult few weeks for Ulster Rugby as their quest to secure silverware looks likely to draw a blank for another year, but Friday’s trip to the RDS to face Leinster in the Rainbow Cup will afford Dan McFarland’s charges the opportunity to salvage some pride (8.15pm, live on Eir Sport and Premier Sport).

Defeat to Leicester Tigers in the Challenge Cup semi-final a fortnight ago ended their European hopes, whilst defeats to Connacht in their Rainbow Cup opener was followed by a crushing loss against Munster at Thomond Park last week that leaves them sitting bottom of the Northern Hemisphere standings with three games left to play.

It would take three thumping wins and the most bizarre seton results elsewhere across the next three weeks for Ulster to somehow find themselves in the top two - a scenario that is simply not going to happen.

However, that is not to say they will be downing tools for their final run of fixtures as there is the opportunity for players to put their hand up to be considered as first-choice for next season and also finally get the better of Leinster on Friday to ensure they sign off on a positive note.

Ulster’s hopes of a PRO14 title came to an end when Leinster visited the Kingspan Stadium in early March, so while victory in Dublin is unlikely to do much in terms of challenging for Rainbow Cup options, it would lay down a marker for next season and Ulster’s Forwards Coach, Roddy Grant, insists rediscovering a winning routine is paramount.

Here is your team representing Ulster to face @LeinsterRugby in Round 3️⃣ of the #GuinnessPRO14RainbowCup at the RDS Arena tomorrow evening (8.15pm kick-off) ⤵️#LEIvULS #SUFTUM ⚪️🔴

“It’s really not good when you don’t win,” he admitted.

“We want to win and get back on the horse. It’s good culturally, professionally, but also going forward into next season it’s important for our young guys to come through.”

The last-gasp defeat to Connacht; second half collapse in Leicester; and heavy defeat at Munster last week have been in contrast to how Ulster’s season had gone prior to this recent run.

Leinster could have also been staring down the brink of a hat-trick of wins following their opening Rainbow Cup loss to Munster and Champions Cup defeat at La Rochelle, but turned things around last week to score an impressive win over Connacht to put themselves back in the frame for further silverware this season.

It is never an easy task at the RDS and nobody in Ulster is expecting anything different on Friday.

“It’s been tough over the past three weeks as losing games aren’t good in pro sport, and they have been big ones (games),” Grant added.

“A semi-final is gutting because you miss out on a final. The Connacht game was bitterly disappointing as it was an inter-pro and how we lost at the end, then Munster: going away and conceding heavily isn’t good.

“We’ll just turn up and give it a heck of a crack and then hopefully we have improvements. We have had some honest meetings this week and we are going to go for it.”

There are 12 changes to the side that lost out in Limerick last Friday although Jacob Stockdale retains his place at full-back, and will be joined by Craig Gilroy on the left wing and Robert Baloucoune on the right.

James Hume will come in to form the midfield partnership with Stuart McCloskey, while Billy Burns and David Shanahan will take up the starting half-back berths.

Eric O’Sullivan, Rob Herring and Marty Moore all come into the starting front row, and Sam Carter will join captain, Iain Henderson in the second row. Matty Rea is named at blindside, with Sean Reidy given the nod at openside, and Nick Timoney will complete the base of the pack at Number Eight.

“When you lose games, you want to make some changes,” Grant confirmed.

“You are also forced at times by injuries and then also wanting to see different guys coming in ahead of next season, so all of that will have come into selection this week.”