Ulster’s fate in their own hands 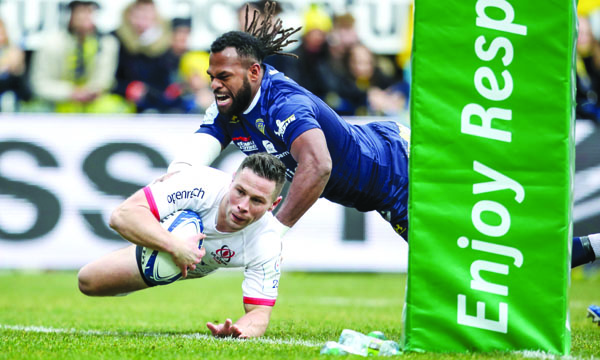 THE scenario is straightforward for Ulster on Saturday afternoon: defeat Bath and they qualify for the quarter-finals of the Champions Cup.

In fact, a four-try bonus point draw would suffice for Dan McFarland’s men to reach the last eight, but victory and atoning for their defeat away to Clermont Auvergne is the only thing on their minds.

Last Saturday’s 29-13 defeat at Stade Marcel-Michelin leaves the French club in pole position heading into their last game away to Harlequins who are already eliminated and therefore will be expected to take the win and top spot in Pool 3.

A slip-up and a win for Ulster against the also eliminated Bath will see them leapfrog Clermont, but in all reality that is an unlikely scenario so McFarland’s men are simply focused on what they have to do on home turf and gain the win that will see them finish the group stage with five wins from six and a quarter-final to look forward to.

“The ball is in our court so it’s important to bounce back,” said scrum half John Cooney who received a boost this week with a call-up to Andy Farrell’s Ireland squad for the Six Nations opener against Scotland.

“We’ve a pretty good record at home at the minute, so it’s important we dust ourselves off and perform this week.”

Ulster led 10-9 at the break last weekend and looked on course for what would have been a famous victory on away soil.

That lead could possibly have been extended with captain Iain Henderson deciding to go to the corner from three kickable penalties, but Cooney has backed his skipper and believes the correct decisions were made with the fact Ulster failed to avail of these opportunities down to poor execution and basic errors.

“I would be similar to what ‘Hendy’ said: people can easily go that it’s three penalties, but you take one and it’s a completely different game because they kick it off and you just don’t know what could happen,” he countered.

“I think we were right to put them under pressure and go to the corner. Had we got those small things right then that could be the difference.

“We’ve been around long enough and played in games where those decisions paid off and in the last two or three games we’ve done that with the crowd behind us. We were trying to silence them away from home and if we had have executed a little bit better, that’s what we were hoping to do.

“We’re disappointed we didn’t come away with that win and I think that’s a reflection of our mentality that we come away from these bit European games and annoyed we didn’t get the win.

“Chatting to Luke Marshall, he’s pretty chuffed with the mentality we have that we want to go out and beat these giants of Europe.”

While Bath’s Champions Cup campaign will end this weekend, that doesn’t mean they have a dearth of talent with Sam Underhill, Anthony Watson and Rhys Davies all bringing international experience, while Taulupe Faletau continues his return from a long-term injury. There is also the added intrigue with Ulster’s Billy Burns going up against his brother and fellow out-half Freddie.

However, names and sub-plots will be pushed to the side as Ulster simply must get the job done and make it six wins from six against Bath in European competition.

A repeat of their 17-16 win in Bath when Jacob Stockdale’s try-saving tackle sealed the deal would do, although they would certainly prefer this game to be a little more comfortable.

“I think they played pretty well in that game and we’ve probably improved since then,” said Cooney who crossed for Ulster’s try last week to maintain an impressive run of form.

“We probably didn’t attack as well as we can, but I think we’ve come on a lot in the games since then.

“They’ve got nothing to lose and they’re coming here with a team full of good individuals. They’ll probably come here and throw the ball around.”

All 10 of Bath’s tries in the competition have come off the set-piece so it would be a change of approach of they were to arrive in Belfast with an expansive game-plan, but given they have nothing and the pressure is off, perhaps the English side will throw off the shackles.

The pressure is on Ulster, but that is a good place to be according to Cooney.

“I remember last year, Will Addison said that pressure’s a privilege and that’s the position we’ve put ourselves in,” he stressed.
“We did that last year to get to the quarter-final. It’s in our hands, especially at home, so it’s important for us to play well and whatever happens, happens.

“If we get the five points (including a bonus point) then great, but the important thing is just to get that win.

“We take a lot of pride in the home games we play and we’ve had two sell-out crowds over the New Year, so it’s important we get up for these games as we don’t want to lose that winning record.”