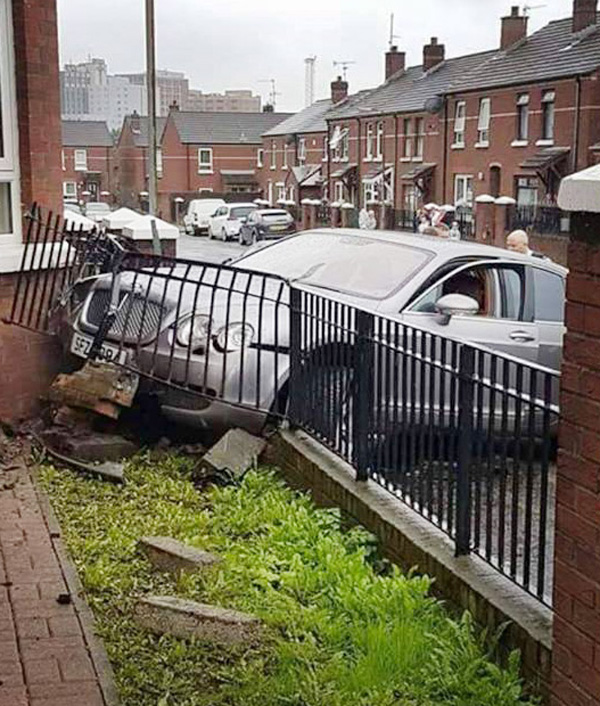 The Silver Bentley smashed into the garden wall of a house in West Belfast on Saturday afternoon.

POLICE have asked the public to remain vigilant after an increase in the use of stolen and ‘runaround’ vehicles for death driving in the Lower Falls area of West Belfast in recent days.

The warning comes after a stolen car smashed into the garden wall of a house on Clonfadden Street at around 12.35pm on Saturday.

The silver Bentley, with an estimated value of £30,000, was stolen from Maguire’s Garage on the Falls Road before being driven recklessly and crashed.

In a statement on social media, police said: "Hello folks, there has been an increase in the use of stolen and runaround vehicles for death driving in the Lower Falls area in recent days, including stolen cars been crashed into one another and a complete and total lack of common sense and human decency by the knuckle draggers who are driving – which I use in the loosest sense of the word on the public roads.

"We must remember these vehicles are stolen for the very purpose of death driving which has caused misery to the area for years.

“The areas they choose to engage in this activity are highly built up residential areas. The criminals who do this do not care about you or your community.

"We will continue to take these cars off the roads and bring offenders to justice. “Thank you for your help and support and please pick up the phone and call us if you witness this behaviour – do not think someone else has already phoned us and we are aware. We need your help in tackling this dangerous and potentially fatal crime."

In relation to the incident in Clonfadden Street, police said two men who fled the scene were described as wearing grey and blue hooded tops respectively.

Inspector Murphy said: “I would ask anyone with any information about this incident to contact Woodbourne police station on the non-emergency number 101, quoting reference number 629 of 03/09/16.

“Or if someone would prefer to provide information without giving their details, they can contact the independent charity Crimestoppers and speak to them anonymously on 08000 555 111.”