ANDRÉE MURPHY: We all know where Protocol trajectory lands 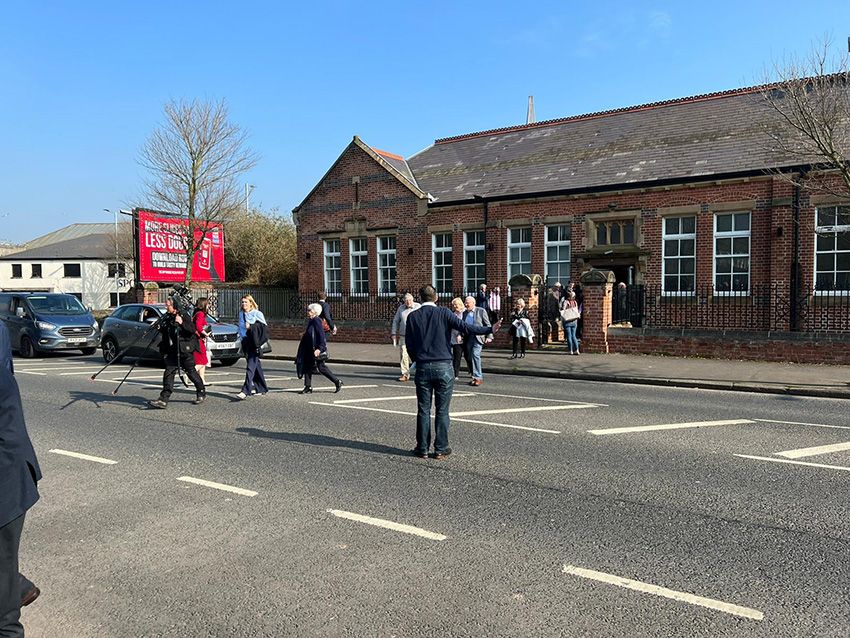 OUT, OUT, OUT: Attendees at the Hume Foundation event are shepherded from the Holy Cross campus

BEFORE the van was driven in, nothing seemed particularly different. Irish Ministers for Foreign Affairs have long come north to speak to building peace. Catholics have, even at the height of conflict, always been able to attend Mass, undisturbed, in Holy Cross on the Crumlin Road.

A family had just arrived to say their goodbyes in a sacred funeral ritual inside the church. The peace centre was hosting a meeting with the Irish Minister for Foreign Affairs, Simon Coveney. So ordinary was this entire scene there was little security presence or measures in place.

The eyewitness reports talk of a man, shaking and distressed, driving his van into the consecrated grounds. He believed that his van contained a bomb after he had been hijacked at gunpoint and a gas canister placed inside. The peace centre in those grounds was the apparent target of those who told him to drive there, or his family would be hurt.

All of a sudden, everything changed. The Minister was silenced and driven away. The good people who had come to listen and contribute to peace and reconciliation were evacuated. The elderly priests who call Holy Cross their home were evacuated and a grieving family had to change how they said goodbye, as Father John Craven heroically turned the pavement outside the security cordon into a Mass Rock and continued with what could be salvaged of the funeral mass.

No one really needed to ask who. We all knew that this was the rhetoric of hate morphing into inevitable violence. Simon Coveney, and the Irish Government, have become totemic for the baying mobs of anti-Protocol nihilists; this crowd that want the benefits of a peace agreement without owning the responsibilities that accompany it; that promoted Brexit, despite our peace agreement; that pursued the hardest Brexit possible, deaf to the consequences of any such actions; that now wish to pretend that the Protocol was devised in Dublin to harm ‘Britishness’, rather than recognise it for what it is – an imperfect trade agreement between the UK Government and the EU to protect peace on the island of Ireland. An agreement which was a last resort as a direct consequence of Britain’s hard Brexit.

The Irish Government, Irish Ministers, the peace agreement and Irishness itself have all been wrapped into one big straw man for this brand of unionism to attack. The reasoning bears little scrutiny, but that does not stop the rhetoric or the incitement.

Last Friday night, hours after the Irish Minister for Foreign Affairs was silenced through the use of threat and violence, there was a speech delivered in Ballymoney by a loyalist without a mandate. “As for the Irish Government, keep your covetous nose out of the internal affairs of our country. You are neither wanted nor welcome in this sovereign territory.”

Doug Beattie recognised the connection between the rhetoric and the violence in North Belfast and ended the UUP’s participation in the incitementfests; his office was subsequently attacked.

Our history tells us exactly where this trajectory lands. Catholicism and Irishness were targeted last week, as were UUP ‘Lundys’. When the Good Friday Agreement and our peace is under attack there is only one course of action. To protect it and defeat those who dare to try to drag us back to the darkness.