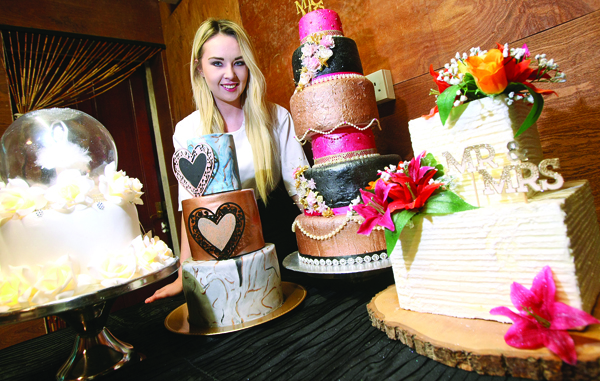 Carly Walsh starts with the prestigious bakery chain this week

A WEST Belfast baker is set to bring her years of expertise and flair to the kitchens of renowned luxury bakery chain Patisserie Valerie.
Lenadoon’s Carly Walsh, founder of The Cakery Co, which has taken social media by storm with photos of her many intricate, artisan creations, will take up the post as cake decorator and learn alongside Patisserie Valerie’s in-house pastry chef this week. A job opportunity that the 28-year-old described “as too good to pass up”.
“I always watched my granny bake, from when I was about six, seven,” explained Carly, “I used to sit on the countertop and watch her bake apple cakes and buns and then I went out to help deliver them.
“When I was 16 I started to bake cakes for my nieces and nephews. I did a degree in product design and was always making cakes alongside that. It wasn’t long after that I spotted a unit in the Great Northern Mall, close to the Europa Hotel in the city centre, to open up my own bakery/coffee shop.
“I did a crash course in how to run a business in around six weeks, I applied for the unit, applied to the bank who gave me a start-up a loan and it all came together. I had a nine-month lease on the unit and it was very successful and I was generating a lot of cake orders. As the lease was nearing its end I decided I had enough orders to keep me going and created my own wee studio that I operate from,” she said.
Carly has baked and designed bespoke orders for Pop Idol and West End star Gareth Gates, comedian and Blame Game panelist Neil Delamere and his fellow sparring partner Jake O’Kane.
“I was contacted by Jake O’Kane to make something as he is coeliac and the cake ended up being part of the Blame Game’s 10th anniversary celebrations at the Waterfront.”
Carly’s meticulous attention to detail as saw her create a fire breathing dragon cake and a recent elaborate 30th birthday cake which incorporated champagne bottles, glasses and lights.
“The cake was to be tiered and the champagne glasses were to hold the cake so you had to take into consideration weight and each tier was to be a different flavour but it all came together and the feedback I got was great. I do it all, from start to finish, I make my own buttercream sponge – the recipe of which I’ll be taking to the grave and then decorate it, no cake is ever the same and the work is very much all my own.”
Carly spoke of how the job opportunity with Patisserie Valerie, which has two stores in Belfast with plans for further expansion, “all happened very quickly”.
“I spotted that they had a job ad online for a cake decorator, I gave them a call and they told me they were looking for X,Y and Z.
“I asked would they take five minutes to have a chat with me and they said to come down and I walked away with a job offer.”
Carly was asked to show the team at the bakery what she could do and spent 30 minutes making a dragon out of spun sugar.
“They said when could I start after I had finished the demo and I said ‘I’ll see you Monday’.
“The opportunity to learn from their own pastry chef will be fantastic, to take that skill and apply it to my own work, which I will still be doing, will be brilliant. I will be designing all their cakes so it will be no weekends off for a while,” she laughed.
For more information on The Cakery Co visit: www.facebook.com/theCakeryco