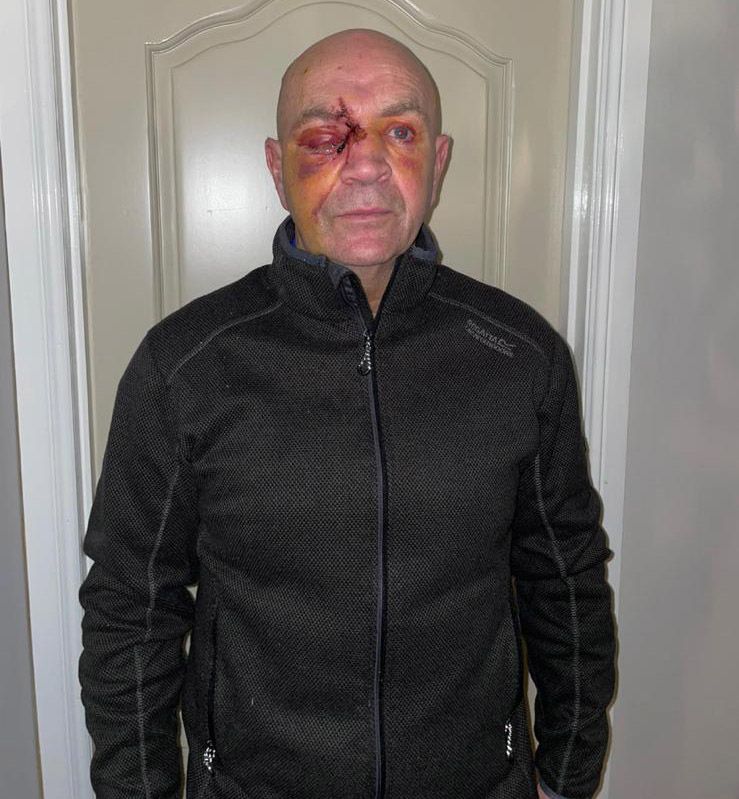 A West Belfast lorry driver, who was almost killed as his windscreen was smashed by a recycling bin filled with rocks thrown from an overpass, could lose the sight in his right eye.

56-year-old Fra McCaffrey from the Norfolk area has sustained life-changing injuries following the attack, which took place as he drove to the Royal Mail office in Larne on Friday night. The father-of-four has undergone several bouts of surgery to repair a hole in his cheek and to remove glass from his eye.

However, his son, Dan McCaffrey, said he will have to undergo further assessment to confirm if he will see from his right eye again.

Mr McCaffrey, who is a popular local taxi driver, had taken up a lorry-driving post during the pandemic. His son said police believe at least two people were involved in the premeditated but random attack and may have used a vehicle to transport the bin full of rocks to the secluded Ballyboley overpass.

“As far as we know it was thrown over the fly-over as he was going under it so that he would meet it at the other side,” Dan said.

“The police seem to think that the bin hit the floor and the rocks bounced out, but with the speed of him going some of them have come through the window.

“There was a big one and a smaller one that came through, and luckily enough it was the smaller one that did the damage because if the big one had hit him it probably would have killed him.”

He continued: “Police are saying it’s a very secluded area and there’s only four homes around there, so it’s not as if it’s on a street near the Westlink. They haven’t said for definite but they’re thinking there may have been a vehicle involved to get it to there. Because there were rocks in it, they’re thinking it’s very unlikely that it was just one person.”

Despite his injuries, Mr McCaffrey managed to safely drive his lorry on to the hard shoulder. Dan said his dad will have to undergo further treatment for his injuries in the weeks ahead.

“He had to get surgery around his cheek and nose,” he said. “There was like a hole in between his nose and his eye, so they had to do some plastic surgery.

“It’s going to be one of those things where he’ll have to keep going back. It’s not like he can just get surgery once and that’s it fixed. He’ll have to go back over the next couple of weeks to be assessed and to see where it’s at. In terms of his right eye they’re not 100 per cent sure if it’s working. They’ve had to pull glass out of it three or four times, so they’re not sure if he’ll be able to see out of it.”

Dan described the “devastating” impact of the attack on his family, but said things are looking “more positive” for his dad.

“It’s devastating for everybody and we didn’t really know the extent of it at the time,” he said.

“When police come to the door at 3 o’clock you think, one, he’s dead, and then, second, you’re trying to play a guessing game of what the extent of his injuries are – is he going to be brain damaged, or is he going to be able to talk? We were just sick with worry.

“Thankfully it’s looking more positive than we thought a couple of days ago.”

Commenting on the attack, Mid and East Antrim Deputy Mayor Andrew Wilson said he hoped Mr McCaffrey will make a “full recovery” from his “terrible ordeal”.

“I am disgusted at the mentality of the criminal responsible for dumping a bin full of rocks on to a busy dual carriageway,” he said. “It’s disgraceful. Who in their right mind would do something like this? Somebody in our community knows who did it and they need to give the information to the police.

“The thug responsible needs caught and put behind bars before they do something like this again. When they are caught, the sentence should reflect the brutality of the crime.”

A PSNI spokesperson said: “An investigation is underway and officers would ask anyone who noticed any suspicious activity in the area of the overpass or who captured dash-cam footage of the incident to contact them in Larne on 101 quoting reference number 1944 08/01/21.”

Police say details can also be reported using the non-emergency reporting form here.  You can also contact Crimestoppers anonymously on 0800 555 111 or online.