West Belfast rivals clash under lights for U21 title 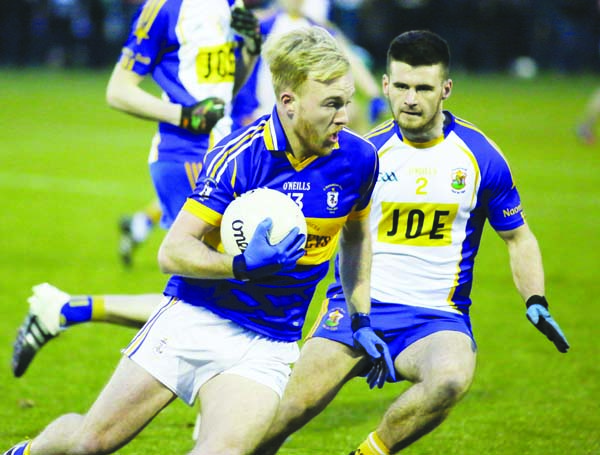 Rossa’s Deaglan Murphy, pictured during last Sunday’s semi-final win over St Brigid’s, will be a key player when his side take on Lámh Dhearg in Friday’s U21 Championship final at The Dub

ROSSA coach Kieran Grego said that the Shaws Road side won’t take anything for granted ahead of the U21 final against Lámh Dhearg on Friday night at The Dub.
Last year’s runners up had 12 points to spare over St Brigid’s in the second of Sunday’s semi-final at Woodlands, while Lámh Dhearg had to grind out a 1-15 to 0-17 win over a much-fancied St Enda’s side to set-up an all-West Belfast affair in this year’s final.

Grego made St Enda’s the favourites before the tournament started, but is well aware of the threat that Lámh Dhearg will pose.
“We’re taking nothing for granted,” admitted Grego.

“I was surprised, to be honest. I would have had St Enda’s as favourites from the start.
“We know Lámh Dhearg from their exploits this year, they’re going to be quite tough and their run this year seems to have stood by them.

“You can see towards the end of the St Brigid’s game, it was our senior players who we were dependant on.
“We have to protect the minors coming through as well. To be honest 10 or 11 points (up) towards the end – I didn’t think we were as good as that at half-time, but we obviously put the effort in and got what we needed.”
Grego has also played down the favourites tag ahead of the final, believing that they are only favourites with the newspapers, despite coming through what he believes was the hardest side of the draw.

“The papers have made us favourites as opposed to ourselves,” he added.
“In terms of preparations, obviously having a strong minor team there that is coming through and competing in Ulster has been a big bonus. There are a couple of lads who maybe weren’t part of our senior team this year, but have come in now and have been training the last couple of weeks.

“It was the papers that made us favourites as opposed to anyone else making us favourites. Obviously we’ve come through some hard matches and I think we probably came through the most difficult side of the draw.”

Former Antrim manager Frank Fitzsimons was delighted to see his side come through a thrilling first semi-final against St Enda’s by a single point, despite the Lámhs lead by eight points and six on two occasions in the second half.

“The boys were saying it was a great turnaround from last year. We were well beaten by that St Enda’s team last year.
“They (St Enda’s) are well drilled and you can see Gerard McNulty’s touch all over them, they’re a smashing side and it’s a good win for us.

“Now we’re in the final and hopefully we can push on and get a result in it too. The boys played very well and stuck to their guns at the end. Paddy Larkin was outstanding, Paddy Mervyn and all the other boys played very, very well.”

Fitzsimons believes that it was justifiable for his side to be considered underdogs, given that many of their opponents had achieved success at underage level in comparison to most of the Lámh Dhearg squad, whose only success to date has been their Senior Championship win.

“The whole way through the Championship, we were always going to be underdogs because the way things are,” Fitzsimons said.
“A lot of our opponents have won Paul McGirr and Minor titles. Our team has only won the Senior Championship this year and some of them were involved in minors over the last few years.

“They’re working well and working hard and they got their just rewards against St Enda’s.”
Fitzsimons felt that the semi-final win against St Enda’s was a brilliant advertisement for Antrim football and hopes that the experience within the squad will stand by them when they take on Rossa.

“St Enda’s were too good of a team for us to think that we could sit on a lead,” Fitzsimons reflected.
“It was high-scoring, good blocks and hits, it was a smashing game and a good advertisement for Antrim football.

“There were three or four starters from the Senior Championship winning team on our side and the rest were on the panel. That experience will obviously come through with them and hopefully they can carry it on through to the final.”