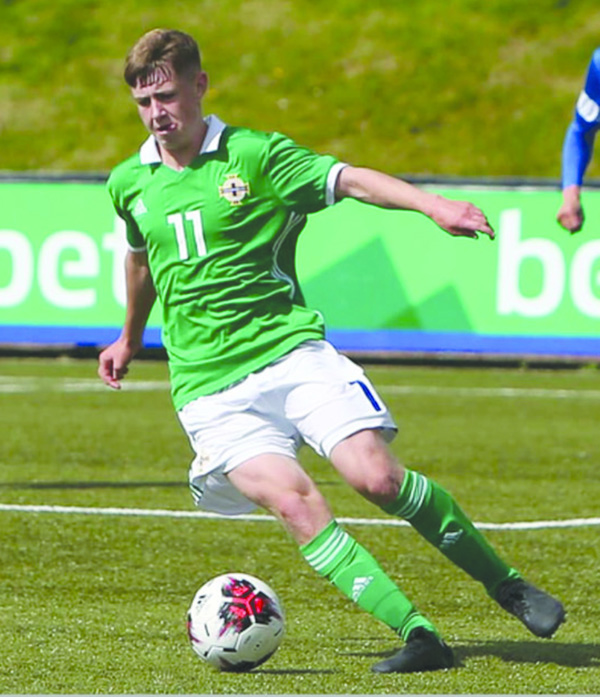 A WEST BELFAST teenager’s dreams of a career as a professional footballer took a huge step in the right direction this week as he began life with English professional club, Feetwood Town.
Barry Baggley put pen to paper on a deal last week that will see him contracted with the EFL League One side for the next two years.
The 16-year-old former St Mary’s CBGS pupil is the son of the Rosario manager, Barry Baggley Snr, so comes from a fine background in the game.
Barry Jnr began playing for Newhill when he was six-years-old before moving across the city to Glentoran from U-10 where he played his football until being picked up by Fleetwood last week.
“Last year our team at Glentoran did the league and cup double, so it was a good way to end,” he said.
“I have also played in internationals and in the Milk Cup. I’m going to the Euro qualifiers in October with the U-17s and won the Milk Cup with County Antrim last year.”
Barry is usually found either in midfield or playing out on the wing and as a Liverpool fan growing up, looked up to players such as Steven Gerrard and Philippe Coutinho as well as Barcelona legend, Lionel Messi.
Of course, he has a long way to go to emulate his idols, but he has done everything right so far to have captured the interest of a professional club in England.
“They saw me playing for Northern Ireland and asked me over for a trial,” explains the Turf Lodge lad.
“I went over for two weeks and did well, so they brought me back for another two weeks and asked me to sign at the end of it.”
Being away from home is not a problem for the rising star as there are some familiar faces also signed to the Lancashire club.
“There are two boys I would know from the Northern Ireland team living over there already,” he continued.
“I already knew them before I went over. That makes it far easier for me to settle in.”
Barry made the journey across to England at the weekend as he begins life at his new club and he is hoping to make his mark early.
The hope is to sufficiently impress in the next two years to earn himself another contract when he turns 18.
“This is a completely new start with a new team and new players,” he acknowledged.
“The aim is to get offered to stay for longer after these two years and for now I will be playing with the U-18s and hopefully start to climb the ladder.”