Who said life is all black and white? 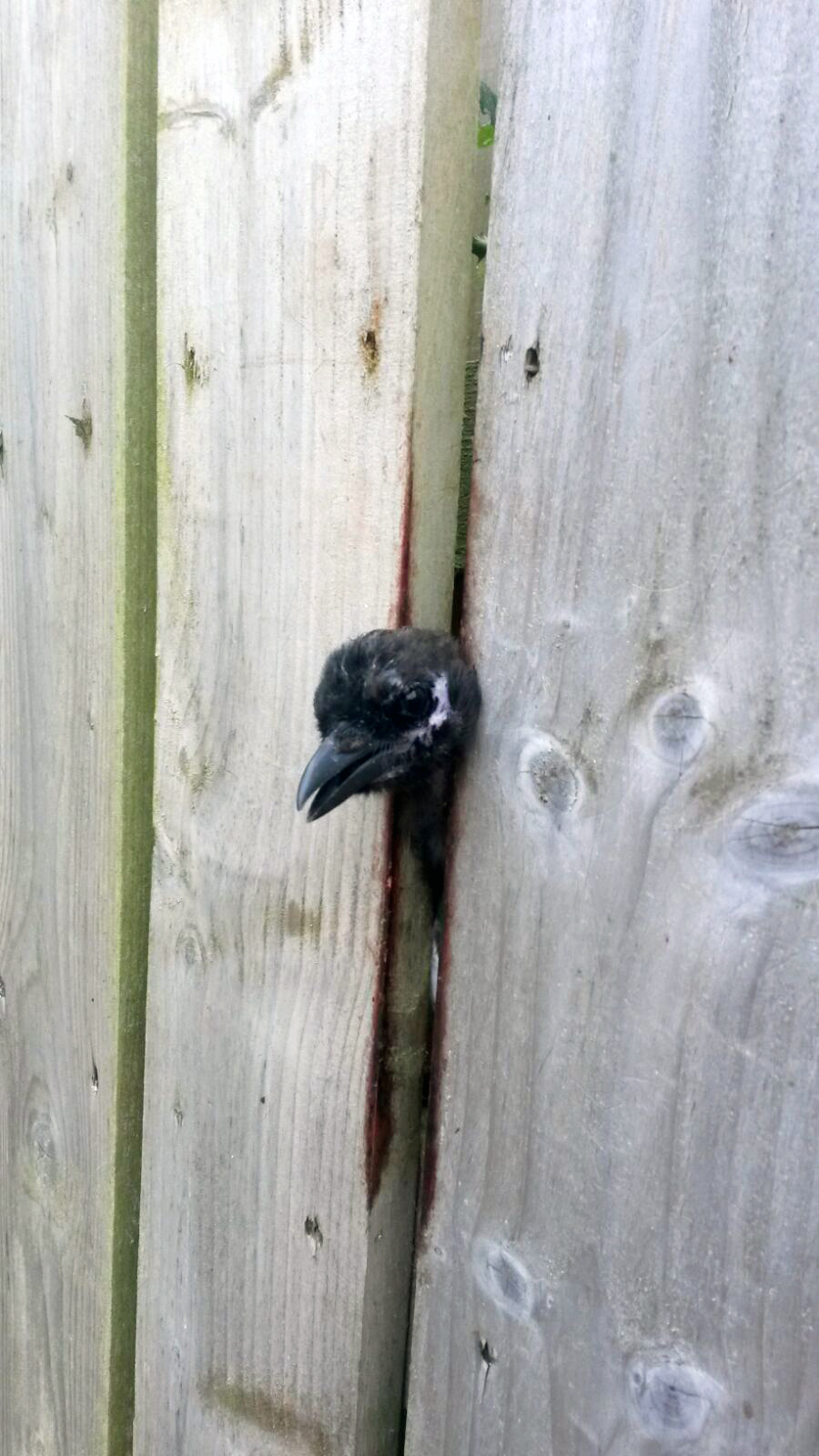 DON’T FENCE ME IN: The magpie with his head stuck between two planks

READERS are well aware that magpies aren’t Dúlra’s favourite bird, but in truth it’s probably more a case of rivalry than anything else. Because this bird is the Einstein of the animal world. It’s officially smarter than every other species of bird and superior to all but a handful of animals. And if you’ve any doubt about their intelligence, this story from Poleglass is all the evidence you’ll need of the super powers of this extraordinary bird.
Gavin Rogan came home from work last week to be told by his 22-year-old son Daniel that a magpie had been keeping him awake all day by rapping on the bedroom window.
“At first he thought it was someone throwing stones from the forest out behind us, but when he pulled back the curtains there was a magpie on the windowsill,” Gavin said.
The birds took off into the garden below and sat on the fence, loudly calling and generally making a nuisance of themselves.
And once the magpies knew for sure that there was someone in the bedroom behind those curtains, they didn’t let up.
At least three of them took turns to rattle and peck at the glass. All day long.
After a couple of hours or torture, Gavin’s son realised that something was clearly wrong in the bird world, got up and and contacted his Da, who always feeds the garden birds. When Forklift driver Gavin returned from work, he went down into the garden where all the magpies had gathered. And he was shocked to find a tiny head sticking out from between two planks of wood in the fence below the bird feeder. Somehow a magpie had managed to get stuck and was unable to free itself.
The poor bird’s mates – perhaps family – had rallied around in its hour of need. They wouldn’t abandon it.
They couldn’t help – but they knew someone who could – those other animals who built the fence in the first place. And so they set about rapping the window.
Gavin – brother of famous Celt Anton – got his cordless drill and set about removing planks from the fence, watched the whole time by an anxious audience of magpies.
“The poor bird had nearly choked. When I freed it, it couldn’t move. There wasn’t a feather on its neck where it had struggled to get free. It sat there for about 10 minutes before it finally got the strength to fly.
“There are scratches on the window where the birds scraped it. And the funny thing is this week they’ve still come back and tapped the window a few times – maybe they’re trying to say thanks!”
Magpies, snag breac in Irish, have a brain-to-body mass that is only outmatched by humans. They can imitate human speech, play games, grieve and use utensils to cut food into smaller portions for their chicks. And one scientific test puts them right at the top of the animal intelligence tree. Only two other creatures have passed the' mirror test' – dolphins and killer whales, as well as one single elephant. A coloured dot is placed on the animal in a place they will only be able to see by looking into a mirror. If they recognise it in the mirror and try to remove it, it’s considered proof of self-awareness, that the animal recognises its reflection as itself, rather than another animal.
Those scientists should ditch all those experiments to prove the magpie's the smartest – they just need to go to Poleglass.
* If you’ve seen anything interesting or have any nature questions, you can text or send Dúlra phot0s on 07801 414804.