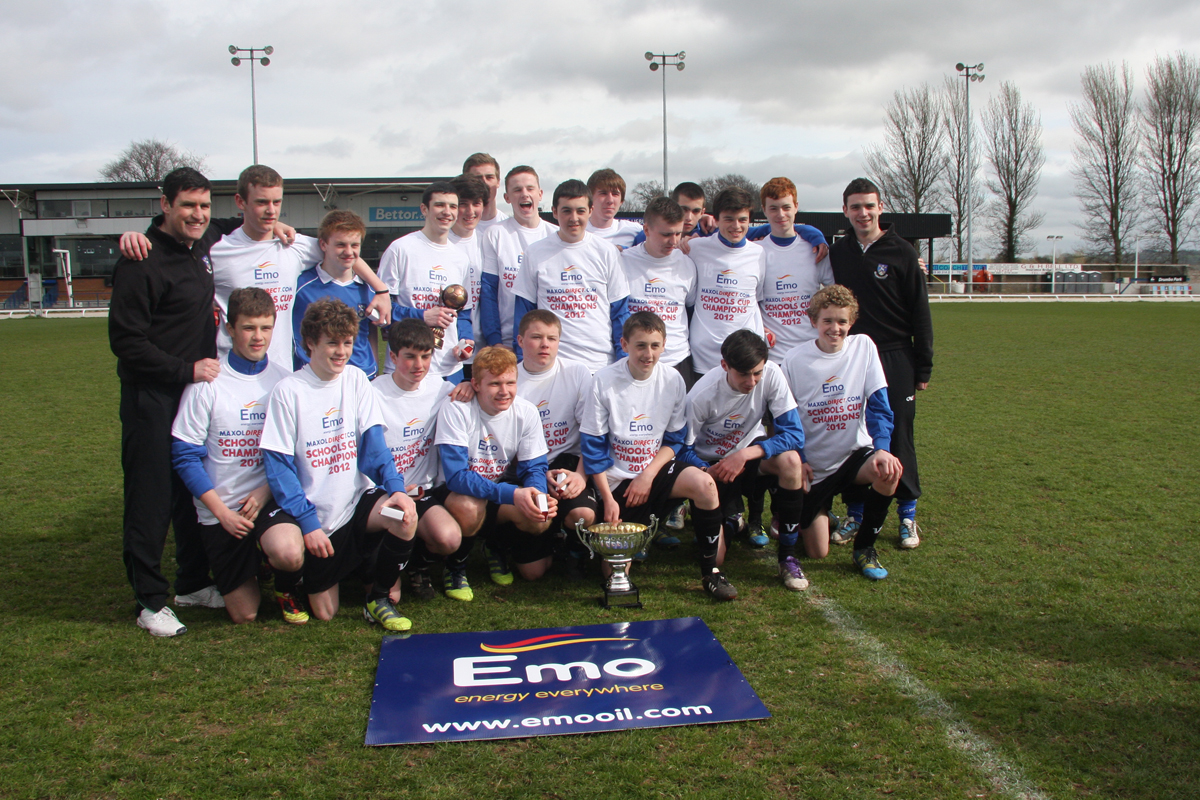 OUR Lady & St Patrick’s Knock manager Frankie Wilson was a delighted man after watching his side lift the Maxol Direct U16 Schools’ Cup title at New Grosvenor on Monday.

Two goals from team captain Tom Grimley either side of a Matthew Colalucca tap-in sealed a 3-0 win for the side made up from many Rosario and Aquinas club men.

The South Belfast schoolteacher put their victory down to hard work both on the pitch and the training field that led to the opening goal when Grimley nodded home Colalucca’s corner after five minutes.

“I’m absolutely thrilled. We were underdogs and I said to the boys going out that was the case but I suppose that’s the best way to be in a cup final,” he said.

“It was a difficult game. Fair play to St Malachy’s – they set their stall out but we were hungry and that shone through from the first minute to the last minute.

“The early goal settled the boys and I keep saying that set-pieces win games. You can see on TV that it’s the one we use at Bangor and the boys worked it to a treat.”

St Malachy’s were left fuming when what looked like a perfectly legitimate equaliser from Seamus McGarry was ruled out for offside minutes later, however this was as close as they came.

Holding a 1-0 lead early in the second half, it was the Knock school that were then victims from a decision when Conor Curran reacted to a heavy challenge by Conor Kearney and was issued a second yellow card.

While disappointed with the reaction of his winger, Wilson said it is something he can learn from in future and praised his entire team for stepping up to nullify St Malachy’s numerical advantage.

“In the second half we had a slender lead and with big Conor getting sent-off. The head goes sometimes but it’s a learning process,” explained the Bangor FC boss.

“We are here at school, here to learn and he will learn from it but the players rallied round.

“I said all year we were a team and there are no individuals. Matthew Colalucca got man-of-the-match but there were seven or eight that pushed him hard.

“The centre midfield was outstanding as were the centre defenders so all in all we are delighted.”

While many would have expected the North Belfast school to push on from that point, it was Our Lady & St Patrick’s who sealed the win with two breakaway goals.

On 54 minutes, Daire Rooney’s burst up the right resulted in him pulling the ball back where the St Malachy’s defenders were unable to clear their lines and man-of-the-match Matthew Colalucca was on hand to tap into the net for 2-0.

It got even better after 63 minutes. This time Colalucca turned provider as he hit St Malachy’s on the break with a burst up the left.

Gibson parried the shot but the ball fell right into the path of Grimley who had the easiest of tasks to tap home to put the icing on the cake.

This sealed the victory and ensured Wilson could add a school’s title to his Steel & Sons Cup win with Bangor earlier in the season.

While finding it impossible to pick a favourite triumph, he pointed out that for the players, a victory with their schoolmates is something that will live with them forever.

“It’s unbelievable. I have been involved with school’s football for 20 years without winning anything but this is the big one to win,” the former Antrim Gaelic football player said.

“This is a different type of management (from club) but you probably still saw me dancing about there like a madman on the sideline.

“I said to them when we gave them the programme before the match that these are things in 20 years time you will look back on.

“You will look at the photographs of the team and not know where half of them are because they will be around the world somewhere doing whatever, but you will always have it in the memory that you won a Maxol Direct U16 Cup so we are delighted for them and the school.”